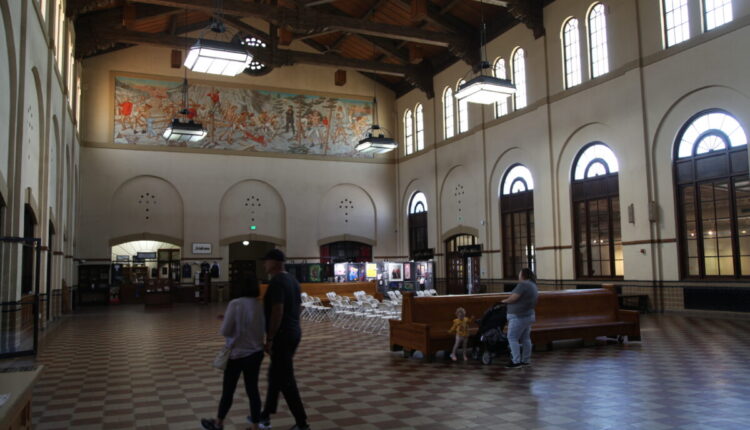 Visitors walk in the lobby of Union Station in Ogden on Wednesday, Oct. 12, 2022.

Visitors walk in the lobby of Union Station in Ogden on Wednesday, Oct. 12, 2022.

OGDEN — As one of Ogden’s most iconic cultural attractions, proposed visions for the historic Union Station are getting harsh criticism and pushback from some community residents.

Steve Jones, chairman of the Golden Spike Railroad Historical Society, says he’s upset by what he alleges are plans to do well with the historic building to make way for new developments. According to Jones, to move or gut the historical location used to show and tell Ogden’s history would take away from the city’s character, which has drawn many to settle roots here.

Theresa Holmes, a Union Station docent, claimed during the public comment portion of an Ogden City Council meeting on Oct. 4 that she was made to sign a non-disclosure agreement regarding plans for the station, but said she has every right to speak up on behalf of Ogden’s museum.

Holmes also alleged the museums are being sabotaged by having exhibits taken down and visitor counts deflated.

Some of those working at Union Station also have claimed that hours of operation have been cut intentionally to make it appear to the public as though interest in the museums is declining.

A recent Union Station visitor said he traveled over 500 miles to see the museums only to find out the site is closed on Mondays and Tuesdays.

According to the city’s Make Ogden plan, which serves as a blueprint for downtown expansion decades into the future, a new museum building and train hall are in the early stages of planning. However, the existing space within the historic station is not planned to be demolished or gutted, but rather repurposed into new revenue-generating uses.

The intention is to do a full restoration of the Union Station’s main lobby and the building’s exterior, said Brandon Cooper, Ogden City’s director of community and economic development.

“We are not getting rid of the museums,” he said.

Building out from the Union Station campus in an attempt to connect it to the larger downtown area has been a topic of conversation in city circles for many years.

Looking to expand the museums and make them better, Cooper said the city is hoping a larger space will provide a cohesive narrative of Ogden’s history in addition to bringing more people in by placing trains up front in a new location.

The trains and collections housed in Union Station are what makes the station great, said Cooper, who emphasized the importance of making them a focal point.

Wings to the north and south of the main lobby have reportedly been “hacked up and retrofitted” a number of times over the decades with little historical elements remaining, Cooper said.

In these areas, Cooper said they are, in fact, looking to modernize by creating economically viable spaces that could include restaurants, offices, a hotel or retail.

According to Cooper, the city wants to emphasize the museums while restoring features of the historic Union Station building that have been changed over the years, such as an underground tunnel from the building to the nearby tracks.

“Anything that is being said to the contrary is a misnomer,” he said.

Being on the National Register of Historic Places, the Union Station building is an artifact. Cooper said anything done to the building would have to meet exact standards by the US Department of the Interior, among other entities.

On Tuesday, Washington, DC, resident Rachel Kassaie was looking for an unlocked door to the station in hopes of returning to a grill she once visited in the building.

Unbeknownst to Kassaie, who was in town for a visit, the iconic landmark is no longer home to the Union Grill and has not been since August 2016, though Chinese restaurant Maple Garden took up residence inside Union Station in 2019.

Kassaie said Union Station reminds her of the Ferry Building in San Francisco, a building similar in structure and historical significance. She said she would opt for an artisan food marketplace with pop-up shops, retailers and restaurants.

Salt Lake City resident Jeremy Hendricks said while he does not live in Ogden, he has traveled many times by both car and train to the station explicitly for the museums and the allure of the building itself.

“It would kinda bum me out,” he said of any drastic overhaul.

Considering himself an “architecture nerd,” Hendricks said it is the building in its current state that makes the experience so grand.

Following an extensive and robust public outreach process in the midst of drafting the Make Ogden Plan in 2019, Cooper said the city learned people in the community not only care about the museums but also the Union Station building itself.

All the planning, studying and outreach has been a thoughtful process to restore the iconic building to its center stage, according to Cooper.