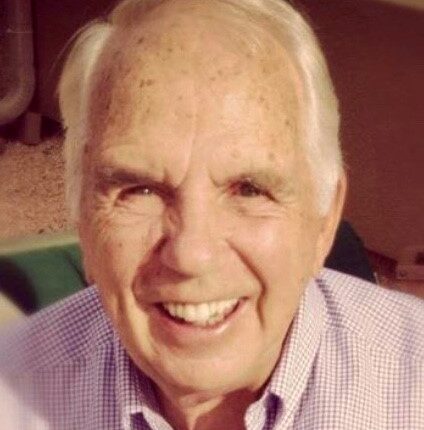 Lieutenant Colonel H Lewis Miller (US Air Force-retired) passed away in St. George, Utah, at age 89, on Sept. 9, 2022, after a long battle with Parkinson’s disease. Lewis was born to Horace and Katherine Jones Miller on Dec. 30, 1932, in Ogden, Utah. As a child, he moved to many different areas around Utah because of his dad’s engineering job. However, his permanent home was in South Ogden.

He was an active member of The Church of Jesus Christ of Latter-day Saints and served a three-year mission to Japan. He also served in various church callings, including as bishop. On July 18, 1957, he married Lucille Hegstrom in the Logan LDS Temple.

His higher education included a BA in History and a BS in Political Science from Brigham Young University, as well as a master’s in Systems Management from the University of Southern California. Additionally, he earned a certificate in the Mandarin Chinese language at Yale University and completed numerous courses at the University of Utah. He could read, write, and speak both Mandarin Chinese and Japanese. After high school, he joined the Naval Reserve, which helped pay for his continuing education. Once he returned home from his mission in Japan, he continued his education and was accepted to law school. Instead of law school, he was commissioned to serve as an officer in the US Air Force and served for over 20 years. His service included intelligence, security, as well as the Minuteman missile program.

Throughout life, he was a voracious reader evident in his large repository of books. Before retirement, Lewis was a skilled fisherman and golfer. He was a lifelong fan of BYU sports and went out of his way to attend games in person. He and Lucille loved to travel; they were especially fond of road trips and cruises. Some of their favorite trips were to Alaska, Scandinavia, and the Panama Canal, along with trips with their children, to San Francisco and the Caribbean.

Lew was also an avid coin collector – always persistent on inspecting his (and our) change. Later in life he enjoyed jeeping and geocaching. Because of his generous spirit, he was dedicated to participating in blood drives. He was proud to have donated well over 20 gallons of highly sought-after O-Negative blood.

He was preceded in death by his wife and eternal companion of 56 years, Lucille; his parents; and his sisters: Gwendolyn (Ron) Bell, Catherine (Keith) Lund, and Vesta Jo (John) Salerno. He is survived by his children: H Lewis (Sheri) Miller Jr., Rebecca (Ernest) Olsen, and Karen (Dyke) Huish; and his sister, Janet Mathie

There will be a viewing Saturday, September 17, 2022 at 9 am at Metcalf Mortuary, 288 West St. George Boulevard, St. George, Utah, followed by a graveside service with military honors at 10 am in Tonaquint Cemetery located at 1777 South Dixie Drive.

In lieu of flowers, the family has requested that memorial donations be made to The Parkinson’s Foundation: https://www.parkinson.org

The family would like to express appreciation to the Southern Utah Veterans Home in Ivins, St. George Regional Hospital, Intermountain HomeCare and Hospice, The Haven at Sky Mountain, and the many caregivers, friends, neighbors, and family who made Lew’s life more enjoyable during these last few years.