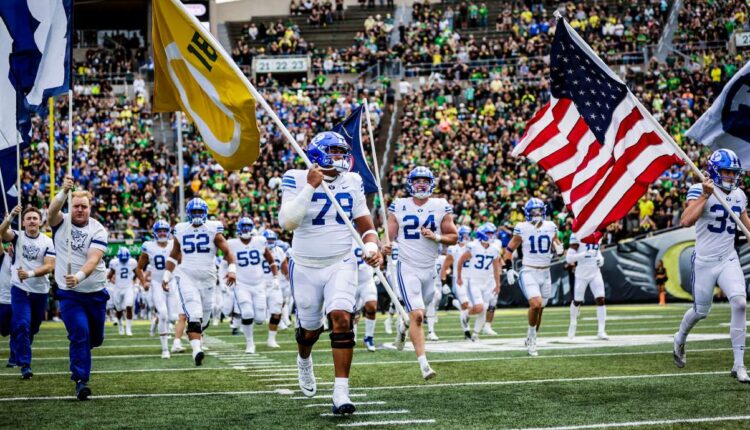 Have You Seen This? BYU offers special flag to Oregon in honor of fallen player

BYU offensive lineman Kingsley Suamataia, an Oregon transfer who prepped at Orem High, runs out a flag with the University of Oregon logo and No. 16 in honor of tight end Spencer Webb, who tragically died over the summer in a climbing accident, prior to the Cougars’ game against the Ducks, Saturday, Sept. 17, 2022 at Autzen Stadium in Eugene, Oregon. (Nate Edwards, BYU Photo)

IN MEMORIAM — The BYU football team suffered a serious setback with a 41-20 loss at Oregon over the weekend.

But the stinging loss won’t be the focus of this story. Nor should it be when something much bigger occurred before the game between two Top 25 opponents kicked off.

Before the game, the now 19th-ranked Cougars laid flowers at the gold-colored 4-yard line in honor of Spencer Webb, the tight end who tragically died in a climbing accident in July. Then they performed another gesture that touched Autzen Stadium and the country.

BYU offensive tackle Kingsley Suamataia, an Orem High product who initially signed with Oregon last year before transferring home, carried a special tribute flag onto the field that included Webb’s No. 18 and the University of Oregon logo on it. After sprinting to midfield, Suamataia then transferred the flag to an Oregon player, who graciously received it while the soldout crowd of 54,463 cheered in gratitude.

Here’s a look at the moment from the top of Autzen Stadium.

BYU typically runs out flags in leading its team on to the field before every game, home or away. Carrying the alumni flags on Saturday were Oregon natives Mitch Mathews (WR, 2009, 12-15) and Marcus Mathews (TE/WR, 2010-13), as well as Carlos Nuno (TE, 1997-99), while kicker Jake Oldroyd and punter Ryan Rehkow carried the team flags.

Legendary Autzen Stadium public address announcer Don Essig — who coined the famous phrase “it never rains at Autzen Stadium” — lauded the tribute as he welcomed BYU on to the field, thanking the team for the move.

Webb, who would’ve been a junior from Sacramento, California, played in all 14 games for the Ducks last year in his fourth season with the program. The former four-star recruit caught 13 passes for 87 yards and a touchdown, including catching at least one pass in nine-straight games and three multi-catch outings, while also playing on special teams.

But in July, Webb was trying to climb a “nearly vertical” cliff near Triangle Lake in Lane County, Oregon, before he lost his grip and tragically fell to his death, according to a Lane County Sheriff’s Office incident report. hey what 22

The tribute was special for Suamataia, who played with Webb during his brief time in Oregon before returning home. The 6-foot-6 freshman met with former Oregon and Orem teammates, including Ducks linebacker Noah Sewell, along with fellow Orem grads Puka Nacua, Jakob Robinson, Ethan Slade and Joshua Singh after the game.

“Regardless of all the hate and racial things that was yelled at you yesterday from the stands, many more people love and care for you son. Your heart is always in the right place,” his father Leroy posted on Twitter after the game. “Keep fighting #MentalHealthSurvivor Day by Day #GodGotUs Love one Another @baby76kings love you #78.”

On the subject of mental health, Utah State coach Blake Anderson announced Monday that the Aggies’ next two games — beginning Saturday against UNLV and including next Thursday’s game at BYU — will include a weeklong initiative to promote mental health awareness.

Most recent Have You Seen This? stories

Utah’s 14 Best Natural Wonders, According To Our Readers