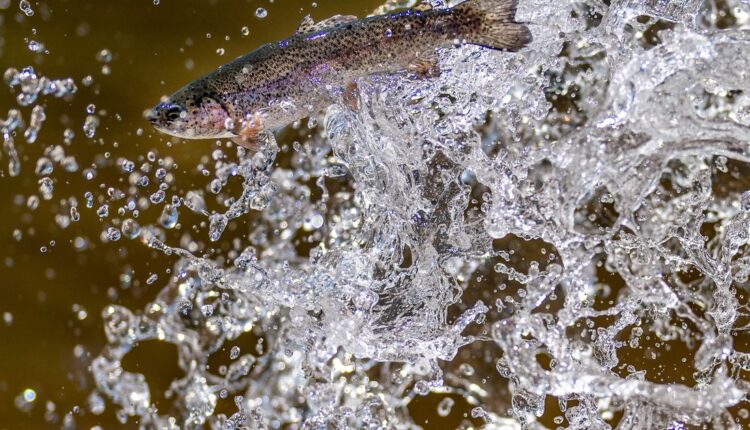 Here’s how extreme drought has changed fishing in Utah

Megan McNeil coaxed the final rainbow trout out of a Utah Division of Wildlife Resources stocking truck, using the broken handle of a net to prod the holdout to escape the metal tank. Slipping through a tube, it joined thousands of other fish she released into Smith and Morehouse Reservoir last month.

It was one of about 2,000 trout that went streaking chaotically through the high mountain reservoir, most instinctively heading to deeper water. But a few stragglers flopped along the water’s edge, nearly marooning themselves on the boat ramp before skittering to the cold depths.

This was the trout’s first time swimming in open water. Bred by state biologists in a concrete hatchery 20 miles from their new home, these 10-inch fish were sent into the wild in June with one purpose: to be caught by Utah anglers.

It’s part of a program the state spent more than $16 million on last year, putting millions of fish into Utah’s waterways. But how state wildlife managers stock Utah’s reservoirs and streams is changing.

The shifting preferences of those who fish in Utah — and whose licensing fees largely fund the program — are one reason.

But last year’s extreme drought conditions have led officials to consider how hot temperatures and less water could kill fish throughout the state.

How Utah has changed fishing

State officials have adjusted in two primary ways: They’re putting less fish in areas where they expect low water and hot temperatures, and they’ve increased the limit on the number of fish that anglers can take home and eat — the idea being that harvesting fish is better than having them die in a lake.

At the nine reservoirs where state officials encouraged anglers to harvest additional fish last year, the state placed on average 52% less fish in 2021 than they did compared to the average of the previous five years.

And Pineview Reservoir didn’t receive any fish last year, a first in seven years. (That was a short-lived trend: Data shows that state officials in May stocked about 10,000 inch-long tiger muskies in the Ogden Valley reservoir, which is a popular place in Utah for catching that species.)

“With the water just getting really low, if we can have fewer fish, what we’re doing is helping the remaining fish survive,” said DWR Sportfish Coordinator Randy Oplinger.

Drought conditions mean less water available in Utah’s lakes, streams and reservoirs — and those smaller amounts of water will heat up more quickly in the summer sun. DWR officials say this can be a problem for fish because warm water holds less oxygen than colder water. That reduced oxygen, combined with high temperatures, means stress on fish, which can cause poor growth, disease and death.

“If you get too many fish in too small a puddle, they’ll use up all the oxygen,” said Craig Schaugaard, Utah DWR’s assistant chief over hatcheries. “And everything this.”

This year, DWR officials have announced five bodies of water in central Utah where the catch-and-keep limit has increased. Fairview Lakes and Otter Creek Reservoir had similar restrictions lifted last year, but it’s a first for Yuba, Minersville and Vernon reservoirs.

Schaugaard said the fish that aren’t going into Utah’s shrinking reservoirs are being stocked in other places, deeper reservoirs that can hold a bit more life — like Fish Lake, which saw a 19% increase in fish stocking in 2021 compared to the year prior . (Mostly rainbow, tiger and cutthroat trout.)

“We’ve got waters such as Flaming Gorge, it’s kind of a big hole that can take more fish so that we’re not just burying our fish, you know, killing them and putting them in the ground,” Schaugaard said. “We’re trying to get them out.”

Schaugaard said anglers might notice they’re not catching as many fish in places like Otter Creek Reservoir, where DWR stocked less fish and increased the harvesting limits. But if Otter Creek regulars are willing to drive 40 miles north to Fish Lake, they’re going to have better odds.

“The same amount of fish are going out the door,” he said. “They’re just going to go to a different location.”

Utah wildlife managers dump nearly 10 million fish, on average, into the state’s rivers, lakes and reservoirs every year. These deliveries — which are conducted by tanker trucks or by aerial bombardment of Utah’s highest lakes — include everything from those 10-inch rainbow trout at Smith and Morehouse Reservoir, to fingerling-sized cutthroat in Mill Creek, to young tiger muskie that will grow to be over two feet long in places like Pineview Reservoir.

The primary goal of the fish stocking program, DWR officials say, is for Utahns to have fun catching fish.

“Most of our stocking goes for the purpose of providing high satisfaction for anglers going out fishing,” said DWR Sportfish Coordinator Randy Oplinger.

There are other reasons for stocking. Wildlife managers will place predator fish, like a Bear Lake cutthroat trout, into some reservoirs to control the population of fish like the Utah chub, which they say could get out of control without a predator to keep their numbers down. But state officials also consider whether releasing a predator species could threaten endangered and native fish, such as the hunchback chub in Lake Powell.

Utah’s fish stocking program is primarily funded by revenue from fishing licenses sold, with some money coming from a federal program that forwards tax income on fishing tackle and boat equipment to states.

In recent years, DWR officials have sold around 300,000 fishing licenses annually, according to their data — with the exception of 2020, when a “pandemic bump” led to 405,000 license sales that year. The following year, however, just over 315,000 anglers bought licenses.

Hatchery expenses have doubled since 2017, when state officials spent $8.7 million on the program compared to $16.2 million last year.

The practice of stocking fish started years before Utah gained statehood, according to DWR officials, when the first fish were released in the state in 1871. There are now 13 hatcheries in the state, and wildlife officials put fish in more than 1,000 places in Utah yearly.

Should more be done?

Critics say the state should focus more of its effort on protecting fish and their habitats, as lakes and rivers in Utah dry and disappear from the landscape.

“Where I get frustrated is the state is interested in selling more licenses,” said Steve Schmidt, the owner of Western Rivers Flyfisher and an advocate for public access and preservation of Utah fishing habitats. “They’re more interested in selling licenses than they are in maintaining their [fish habitats].”

One possible protection, Schmidt said, would be banning fishing during the hottest parts of the day when the water is at its warmest. Fish that are caught and then released during this hot period can struggle to recover, he said.

He recalled alerting state officials last year when water in the Weber River was climbing to 75 degrees during the day. He said he was told by wildlife managers that they would be monitoring it, but no action was taken.

“People shouldn’t be fishing this,” Schmidt said. “It’s super frustrating and they don’t want to put restrictions on it.”

Oplinger said wildlife managers did consider limiting when anglers could be on the water earlier this summer, but said studies have shown that fish that are stressed after being caught still find refuge areas with suitable temperatures and oxygen, even in hot and dry conditions.

The mortality rate for fish caught and released “even in the hottest conditions is very minimal,” Oplinger said, allowing fishing during hot conditions has a “negligible” impact on fish population.

“Based on the review of the data we feel that these kinds of regulations will significantly impact anglers,” he said, “while providing very little if any benefit to [fish habitat] as a whole.”

Idaho wildlife officials made the same point last year when they decided not to restrict the times of day when people could fish in summer months. Short-term changes like that are “unlikely” to affect the number of fish in the long term, Fish and Game officials said in a statement, “even during an extraordinary heatwave.”

‘There are things we can do’

But other states are putting drought-related restrictions on when anglers can cast.

They’re called “hoot owl” restrictions, a name that Montana wildlife managers say comes from the early 1900s. Loggers back then could hear owl calls as they worked in the cooler early mornings, and they avoided the dry, sunny parts of the day when the chances of sparking a wildfire were greater.

In Montana, anglers currently aren’t allowed to fish past 2 pm on the lower Madison River (a nationally famous Blue Ribbon trout fishery) in the summer months — an effort that state officials say will protect trout from the stress of catch-and- release at times when drought conditions are already taxing trout.

In this March 27, 2019 photo, the Madison River flows in Ennis, Mont. Ennis residents are worried about any new rules or limitations on the Madison River, one of the most famous fly-fishing destinations in the world. (Rachel Leathe/Bozeman Daily Chronicle via AP)

These restrictions have been particularly effective in raising awareness among anglers of the effects of climate change, said Warren Colyer, director of the Western Water and Habitat Program at Trout Unlimited, a national nonprofit focused on fish conservation.

“One of the biggest things that I feel is important that management agencies do is educate the public about the situation and what is going on,” Colyer said, “informing folks about how things are changing and why management might need to adjust.”

Colyer said the organization, whose priority is conserving native trout, has worked with water management officials in Utah and elsewhere to take measures like reconnecting streams and floodplains to give fish more space to find cold water and survive drought conditions. They’ve also advocated to create refuge areas for native trout where they don’t have to compete with nonnative fish.

“The biggest thing to do is remove the other stressors,” he said. “There’s not a lot we can do in the immediate term to change temperatures or drought. [But] we can address the other things that are stressing native and wild trout habitats.

They also said that on “rare” occasions, Oregon Department of Fish and Wildlife officers would “salvage fish and move them to a different waterbody.”

“There are things we can do to help ensure our iconic species can weather these droughts,” Shaun Clements, ODFW deputy administrator for inland fisheries, said in a June 2021 news release.

“By protecting and restoring the most important habitats to provide cool, clean water,” Clements wrote, “we give them a fighting chance.”

UTAH FISH STOCKING BY THE NUMBERS

1.107: The number of locations on lakes, reservoirs and rivers where the Utah Division of Wildlife Resources has stocked fish over the last decade.

23: The number of different fish species stocked in Utah reservoirs.

8.16: The average length (in inches) of fish stocked over the last decade.