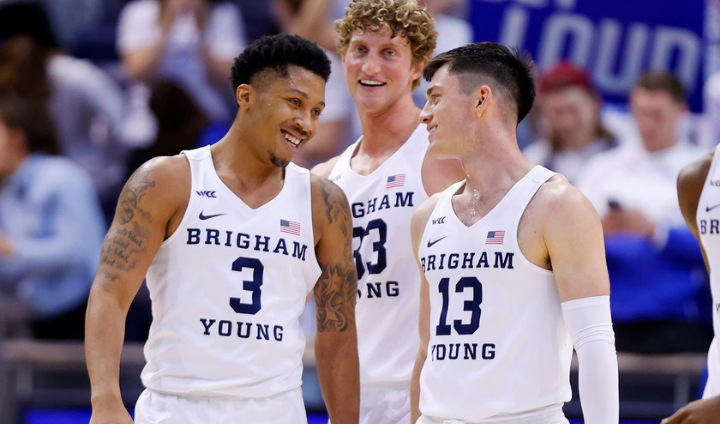 PROVO, Utah – BYU basketball responded after a disgruntled loss with a road win over Missouri State, 74-68. The Cougars survived another tough test on the road after losing to Utah Valley earlier this week.

Alex Barcello and Te’Jon Lucas’ senior backcourt came out big for BYU. Barcello led the team by 21 points in just 2-7 shoot-outs out of three, adding four steals. Lucas added 17 points and two blocks. It was a highly competitive game between the Cougars and Bears of the Missouri Valley Conference. Although it stayed relatively tight the whole time, BYU led in the final 27 minutes of playing time

Improved shooting for BYU in the first half

BYU missed Gavin Baxter’s presence in the first half, who sustained an injury against Utah Valley at the end of the season. The size of the state of Missouri in color was a real challenge. The Bears led in the rebounds (20-14), with BYU not pulling down an offensive rebound in half. Caleb Lohner started for the injured Baxter as a fiver.

However, it was an improved performance of three that helped BYU stay on top in the first half. They shot 5-12 for 42%, which is way above their 29.9% average when they enter the game. Spencer Johnson was one of BYU’s top players this season and one of the biggest surprises. He was big off the bench in the first half and led the team with 12 points. He was also a perfect 3-3 out of three-point range.

Spencer Johnson receives the Most Improved Player Award on this #BYU roster earlier this season. He played great basketball this year. # BYUHoops @kslsports

Cough on top of half. pic.twitter.com/vOF5diRUUC

Senior backcourt leads Cougars in the second half

Missouri State had a ten-minute stretch at the end of the first half and the beginning of the second half with no field goal scored. By the time the Bears scored their first bucket at halftime, BYU had expanded its lead to 14 points.

This is one of those games where #BYU just needs to find a way to “survive and move forward”. Honestly, that could be the theme for a lot of # BYU games against the top 100 teams for the remainder of this season. # BYUHoops @kslsports

It wasn’t an easy half for BYU, however. Missouri State went on to fill the void against the Cougars, but BYU top guards appeared every time it got possession. Alex Barcello and Te’Jon Lucas kept coming back in the second half and contributed to the win. Barcello had 14 points without a three at halftime (0-4) and another two steals. Lucas added 11 points, two blocks, and a steal.

The Cougars were unable to continue their improved three-point shooting in the second half. After shooting 42% of three in the first half, BYU only shot 1-11 in the last half. The Bears continued to hold the game tight, with the game under a minute to play. But Caleb Lohner had a large bucket and Seneca Knight came with a key pad when BYU needed it. The Cougars prevailed with a 74-68 victory.

BYU is returning home for yet another enemy in the state. The Aggies (6-2) of the state of Utah are coming to the city. The game will take place at the Marriott Center in Provo, Utah, with a tip at 7 p.m. (MDT). You can listen to the game on KSL NewsRadio 102.7 FM and 1160 AM.