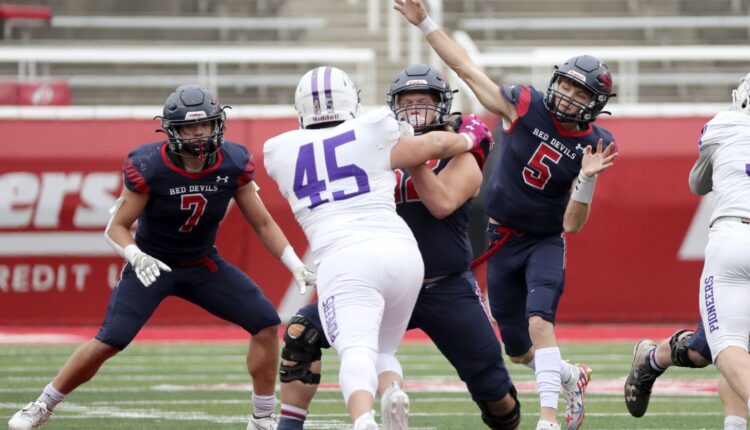 There’s a sentiment in Region 9 that if things aren’t going well for your football program, just hunker down and wait a year and you’ll probably be competing for a region title the following season.

Over the past three seasons since the current region was formed, five of the six teams have earned at least a share of a region championship. Salem Hills is the only team who hasn’t claimed region hardware, but ironically enough two years ago it still enjoyed a 5A semifinal appearance as a third-place team from Region 9. Four of the six teams have also taken a turn finishing in the bottom two teams in the region — only Wasatch and Springville haven’t.

Provo is the only team over the past three years to claim an outright region title, which happened three years ago. Two years again Wasatch and Maple Mountain shared the region title and then last year Springville and Spanish Fork shared it.

“Our region is tough. Any team can beat any team on any given night,” said first-year Springville coach Dave Valeti, who previously served as an assistant coach for the Red Devils.

Springville advanced all the way to the 4A state championship game last year, but it had a dreadful performance in the title game in losing to Lehi. It has served as extra motivation as the team is hungry to get after it again and try and take the next step as a program.

With five returning offensive and defensive starters back it has a great foundation to build on, and the rest of the Region 9 coaches know it too as they’ve pegged Springville as the team to beat in region.

“We had a great core of seniors last year that set some good examples and good standards for us. Losing that production hurts, but we bring back a lot of talented guys. Some of our younger guys are excited, they’ve been waiting for their turn to get under the lights,” said Valeti.

One of the Red Devils’ top returning players is BYU quarterback commit Ryder Burton. He passed for 2,300 yards and 25 touchdowns, and that production figures to go up with a year of experience under his belt.

Burton threw 12 interceptions last season, but six of them came in the championship ouster to Lehi. He’s worked extremely hard all offseason to be better prepared for success on the biggest stage. Valeti said he along with the entire team is extremely hungry for the 2022 season to kick off.

The Region 9 coaches pegged Spanish Fork as the team most likely to push Springville for the region title.

Third-year Spanish Fork coach Dustin Smith really likes the quality of his returning starters, but there aren’t that many and the newcomers are very inexperienced at the varsity level.

“This is a really hard year for me to predict how we’re going to be. I could see us being a really good team and competing again for the region championship, and I could also see a scenario with our inexperience and we’re a smaller school at Spanish Fork maybe we struggle a little bit, especially early in the season,” said Smith.

Josh Buck is one of Spanish Fork’s top returning players as he rushed for 1,054 yards and nine touchdowns a year ago. Defensively the Dons will rely heavily on four-year starting defensive lineman Isaac Reupena.

Wasatch has some big holes to fill with just three returning starters on offense and four on defense, but it’s a program that’s consistently on the cusp of greatness and its 11 combined region wins the past three years is more than anyone else.

Last year the Wasps lost to eventual state champion Lehi in overtime in the 5A second round. With an extra bounce here or there, who knows how the rest of the season unfolds.

Provo tied with Wasatch for third-place a year ago, but, like Wasatch, also bowed out of the playoffs earlier than expected. Coach Kirk Chambers’ team returns six starters on offense and could be the sleeper team in the region based on preseason projections.

Maple Mountain and Salem Hills finished bottom two in Region 9 a year ago and that’s where their projected again. Each program is just two years removed from a 5A semifinal appearance, so it’s not out of the realm of possibility to expect either to make a huge jump and be right in the thick of the Region 9 hunt.

Head coach: Dave Valeti. Springville’s defensive coordinator since 2014, Dave Valeti is taking over as head coach at his alma mater this season. He played college football at Snow College and is a graduate of UVU.

Coach Dave Valeti’s general outlook: We are excited for this upcoming season. We lost some great players from last year’s run, but return some key players and have some exciting guys that have been preparing for their opportunities. We have a quarterback that we believe in and that has done a great job so far becoming a leader for our team. We believe in our process and the players have really bought in. We are excited to develop this year’s identity.

Offensively, we believe in a physical, tough approach. We believe in running the football and controlling the time-of-possession. We also love to give defenses multiple formations to prepare for and will pass and use balance to keep them on their heels.

Defensively, we are multiple. We believe in playing tough, physical football. We want to use multiple fronts and pressures to dictate the game.

Head coach: Dustin Smith. Heading into his third season as head coach at his alma mater after guiding the Dons to an 11-11 record the past two years. He’s a graduate of UVU and founded QB Elite in 2011.

Coach Dustin Smith’s general outlook: We are returning several key players from last year’s team, but overall we will be younger than usual this season with a lot of playing time out there to be earned. I expect will make some mistakes, but be led several very experienced seniors who have all played varsity since their sophomore and even freshman years.

Head coach: Kirk Chambers. Is heading into his third season as head coach at Provo, after an 11-10 record the past two seasons. He previously was the head coach at Spanish Fork for three years from 2012-2014, where his teams posted a 23-14 record. He’s a graduate of Provo High School and Stanford University. He spent seven years in the NFL, playing for the Browns, Bills, Bengals and Falcons.

Coach Kirk Chambers’s general outlook: The Bulldogs look to improve on their 7-3 season and hope to push deeper into the playoffs with an experienced group of returning starters leading the way. Last year’s early playoff loss was a disappointment. This year’s offense will feature a strong and experienced line with a healthy Jamison Harward running the ball. After switching from safety, Kyson Condie will take the reins at quarterback. At receiver, he will have his choice of fellow seniors, Talo Takitaki and Tomasi Hifo, with underclassmen Drew Deucher and Moses Vaenuku ready to make big plays as well. Defensively, junior Tagai Lesa will lead the defense from the middle linebacker position. Fellow junior, Kyle Larsen, returns as a ball hawking safety who will direct the young backfield. Sefa Diaz and Ezra Tuilevuka hope to be putting a lot of pressure on opposing quarterbacks as well. Provo High seems to be reloaded to be a contender in Region 9 and to make a run late in the season.

Coach Steve Coburn’s general outlook: Wasatch looks to reload after an overtime loss to eventual state champion Lehi to conclude the 2021 season. Fueled by a talented core of linebackers (Sawyer Johansen and Kolton Brisk), the Wasps should be tough on defense. Caden Luke captains the defense as a returning starter at safety. Offensively, the Wasps return standout senior running back, Chris Cook, along with Jeraldo Payan (C) and Austin McNaughtan (LG) on the offensive line. The Wasps will lean on senior QB/WR Crew Erickson to match the speed of the talented 5A. Special teams will feature two skilled junior kickers/punters in Ashton Southam and Fischer Brown.

Head coach: Brad Burtenshaw. The only head coach in Maple Mountain’s history, Burtenshaw is entering his 14th season as head coach with a 62-83 record over that stretch. He’s a graduate of San Juan High School and the University of Utah.

Coach Brad Burtenshaw’s general outlook: We have a solid group of experienced players coming back from last year. We really like our team chemistry and attitude. We have several competitions at different positions that will continue into fall camp. Our strength will be the depth of our team, but we will lack experience in some positions. We look forward to competing at a high level against the opponents on our tough schedule.

Head coach: Jeff Higginson. Is entering his third season as head coach at Salem Hills after guiding the program to a 10-11 record the past two years. He’s a graduate of Spanish Fork High School and UVU.

Coach Jeff Higginson’s general outlook: We’re excited out our young football team! They have worked hard this offseason, looking forward to watching them compete this fall.