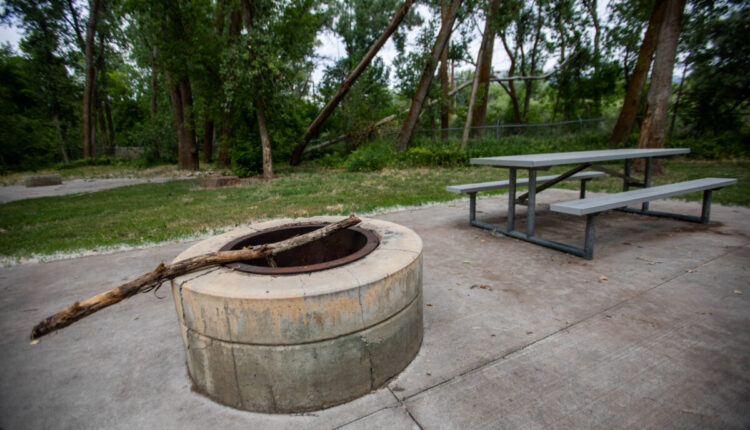 A campsite with a fire ring is seen on Monday, June 15, 2020, at the Fort Buenaventura Park campground in Ogden.

WEBER COUNTY — With Utah experiencing record drought conditions, reducing human-caused fires is a priority for the Bureau of Land Management and agency partners — one that is still smoldering as the public struggles to catch on.

Utah and US federal agencies established the Fire Sense campaign in 2021 to educate the public on wildfire prevention with videos, billboards, social media posts and other public outreach materials.

While their efforts have been called being successful, with 900 fewer human-caused fires reported by the state of Utah in 2021, a US Forest Service prevention technician in the Ogden Ranger District of the Uinta-Wasatch-Cache National Forest extinguished nine abandoned campfires on July 24, during the Pioneer Day holiday weekend.

Messages in the Fire Sense campaign included reminders to never leave a campfire unattended, never start a campfire on a windy day, keep fire in a fire pit and make sure it is completely doubled before walking away.

Abandoned campfires are defined as unattended fires that are still hot within a fire ring. Jennifer Hansen, a fire education specialist at the Uinta-Wasatch-Cache National Forest, said the potential of abandoned campfires escaping into adjacent fuels and causing a wildfire would be much greater without prevention techs patrolling the districts.

“We are urging the public to use their fire sense when visiting public lands and to do everything possible to help prevent a wildfire,” said Chris Deets, BLM West Desert District acting fire management officer.

Public service announcements on campfire safety are being played both inside Maverick gas stations as well as at the pump in a partnership between the BLM and Maverick.

According to Chuck Maggelet, president and chief adventure guide at Maverick, 11 million transactions occur inside Maverick stores monthly and nearly 7 million more happen at the pumps.

“We’re sure to reach millions of customers with our ‘Spark Safety, Not Wildfires’ messages as (people) are heading out on their next adventure,” he said.

The BLM’s West Desert District in Salt Lake City and Color Country District based out of Cedar City joined Utah and the Forest Service on July 18, by moving into stage 1 fire restrictions.

According to BLM West Desert District Public Affairs Specialist Hannah Lenkowski, fire restrictions are in effect in over half of the counties in Utah.

Lenkowski said all material in a campfire must be cool to the touch before leaving, which can be accomplished by drowning the fire using water and a shovel to stir the ashes. While dirt and sand can be used in lieu of water, she recommends visitors be prepared with a shovel, water and fire extinguisher.

Hansen said the Uinta-Wasatch-Cache National Forest is continually collecting data to track problem areas in relation to abandoned campfires. There have been approximately 55 such areas reported within the UWC to date.

“Collecting this data is invaluable,” Hansen said. “We can target our prevention activities and prioritize district and forest needs.”

In the event of a wildfire that has been determined by investigators to have been caused intentionally, maliciously or negligently, criminal or civil charges will be pursued along with suppression costs and any damages.