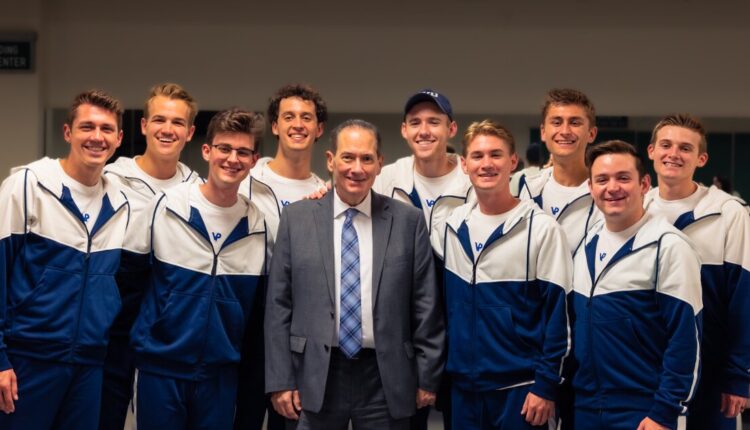 Whenever Gerry Schlette had an especially difficult day teaching respiratory therapy classes at Union County College in Cranford, New Jersey, he would go into his office, close the door, pull the blinds down, and listen to Vocal Point.

“I’ve been following Vocal Point for over 3 years, and I love them to death,” Schlette said. “Every time I listen to them, it makes me feel better.”

Schlette has since retired from teaching, but the music of Brigham Young University’s male a capella group continues to bring him peace in the face of a new obstacle: his battle with a terminal illness. His favorite Vocal Point song is “You Raise Me Up.”

Schlette was not a member of The Church of Jesus Christ of Latter-day Saints when he found Vocal Point. In fact, he was a lifelong Roman Catholic. He only happened to find Vocal Point because they came up as a recommended artist on YouTube after work one day. Schlette quickly became obsessed.

This August, Schlette decided it was time for him to make a trip out to Provo, Utah—home of BYU and Vocal Point—to find out more about why the group’s music inspired him so deeply.

“I’d heard of Brigham Young University, but I had never seen it and didn’t know anything about it, so that’s what drew me out there in the first place,” Schlette said. “When I decided to come out to Provo, I was at a very dark place in my life and I wasn’t very happy, and I wanted to do something positive.”

Despite not meeting any members of Vocal Point when he visited campus in August, Schlette met with many students who answered his questions and helped him have “an incredible experience,” he said. The first person Schlette met on campus was his tour guide, Braeden Gibbs, a BYU student working as a tour guide for University Relations.

Gibbs was impressed that Schlette had made a monetary donation to Vocal Point just prior to his trip, despite knowing so little about the group. During the tour, Schlette asked Gibbs many doctrinal questions about the Church and about what set BYU apart from other universities.

“Braeden answered those questions and gave me guidance, and it was the best thing I could have asked for,” Schlette said. “I am so thankful for people like Braeden who give so much of themselves into what they believe.”

While Schlette was preparing to fly back to New Jersey after his trip to Provo, he received a call from Emily Varney, a full-time donor liaison for Church Philanthropies, thanking him for his donation to Vocal Point.

During the call, Schlette mentioned that he wasn’t feeling well—he had gone through a round of chemotherapy just prior to his trip—and Varney felt prompted to ask him if he would like a priesthood blessing.

“It’s not a normal thing to say to a donor: ‘Would you like a priesthood blessing?’ Especially not a nonmember donor,” Varney said. “It was definitely prompted by the Spirit. And I’m old enough to know that when you get those promptings, you’ll regret it if you don’t listen. So I asked him.”

Schlette was interested. When he made it home to New Jersey, he called Varney back. It was late in the evening and the mission office was closed, but one of Varney’s coworkers happened to have the cell phone number of President Micah D. Rolfe, mission president of the New Jersey Morristown Mission.

Varney called President Rolfe who sent over Elder Connor Snapp and Elder Benjamin Tu’ivai to give Schlette a blessing.

“Gerry was amazed that somehow they were able to touch on every one of his points of concern in the blessing they gave him, and also humbled that men he didn’t even know would be willing to help him,” Darais said. “The blessing these men gave him dissipated the huge knot of worry and fear Gerry had been carrying with him, leaving in its place a peace he couldn’t describe.”

Schlette emailed Varney the next day to tell her he had watched the video four times and enjoyed the unique doctrine shared by President Nelson that “Perfection comes not in this life, but in the next life.” It was a unique doctrine he’d never heard before and it stuck with him.

Schlette asked Varney what he needed to do to join the Church. Within two weeks of visiting the BYU campus and receiving a priesthood blessing, Schlette had met with missionaries several times, begun reading the Book of Mormon, and given up coffee.

“I decided I needed to have a change in my life, and I said, ‘I want to become a member of Christ’s church,'” Schlette said. “It was the best decision I’ve ever made.”

Deeply impressed by Schlette’s conversion, Varney called Darais back at the BYU Performing Arts office to share his story. Darais then contacted Vocal Point Director McKay Crockett to ask if there was any way Vocal Point could participate in the baptism and record a song for him.

On September 4, Schlette was baptized. Much to Schlette’s joy and surprise, Vocal Point shared a pre-recorded rendition of “I Am a Child of God” they had performed just for Schlette. 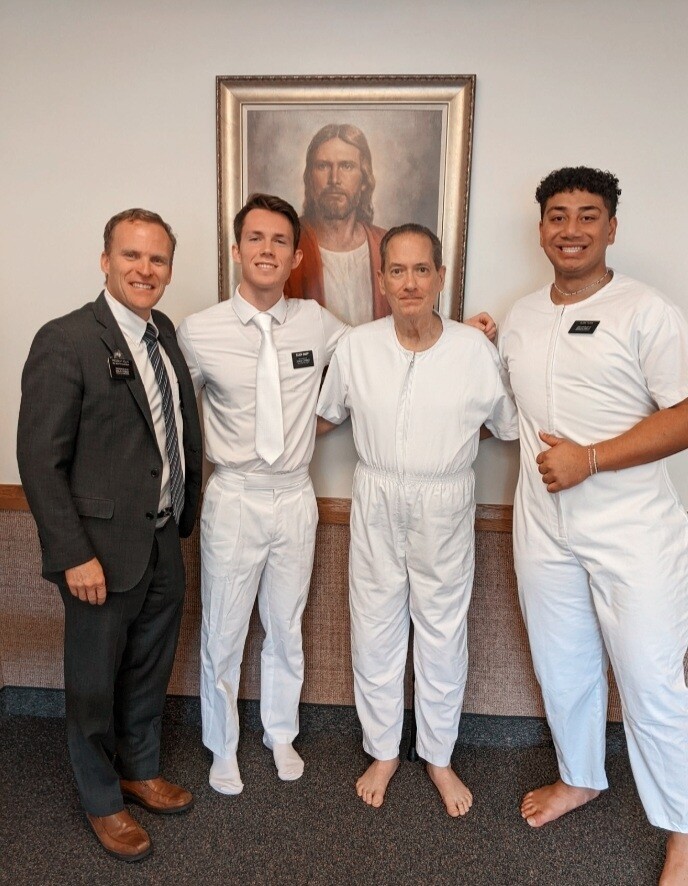 “I wanted to cry,” Schlette said. “I was just so grateful that they made a video for someone they didn’t even know. They went out of their way to bless me. How incredible is that?”

Schlette also felt a lot of love and support from his new ward and Church family at his baptism.

“When his baptism was over, it took him a long time to get out of the building because there were so many people there he’d never met who just wanted to shake his hand and welcome him and tell him how much they loved him, ” Darais said.

Several members of Vocal Point also joined the celebration from Provo via Zoom broadcast. Group member Alex Brown said the best part was watching Schlette’s change of heart, even before he entered the font.

► You may also like: From stuttering to beatboxing: Meet BYU Vocal Point’s percussion

“He was so kind, so willing, so anxious to learn truth,” Brown said. “The thought that his transformation process began with this group was incredible.”

Vocal Point member Hyrum Jackson was also touched by the impact his group had on Schlette.

“I was able to attend the service via Zoom, and the Spirit was felt very strongly even digitally,” Jackson said of the baptism. “The purpose of the group is to enlighten the hearts and minds of those who hear, and here is a man whose life has been changed with the group’s music.”

Schlette said he watches the video that Vocal Point made for him at least once a day.

“I know the song by heart now,” he said.

After his baptism, Schlette asked the BYU Performing Arts Management office if he could meet Vocal Point if he returned to visit campus again. He was encouraged to come during the first weekend of October so that along with meeting Vocal Point, he could also attend General Conference in person.

Schlette attended Vocal Point’s rehearsal on September 30, along with others who had been instrumental in his conversion, including Varney and her husband; Crockett, Darais, and Gibbs. Schlette shared his story with the group, talked to each member of Vocal Point personally, and thanked them for how they had impacted his life.

“You know when you look up and take a breath and go, ‘Is this really happening?’ That’s how it was for me,” Schlette said. “They are incredible, wonderful young men.” 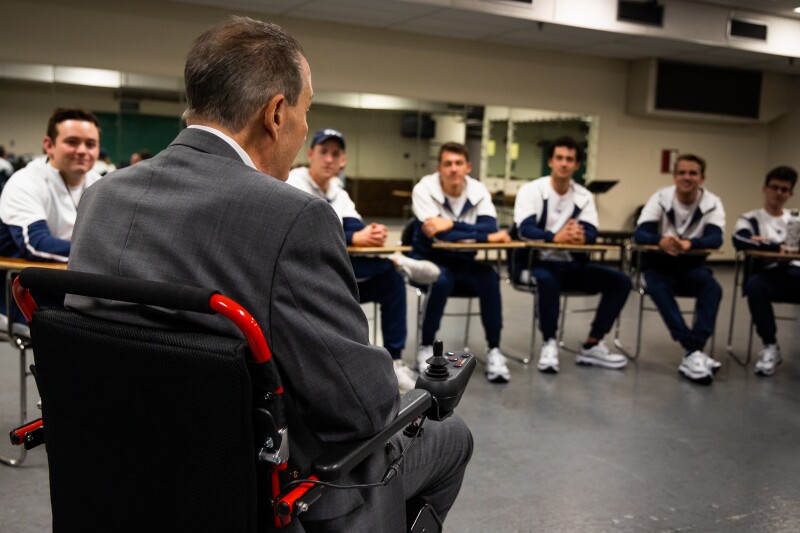 He shared with Vocal Point how their music had helped him find peace when he was struggling and that they were the ones who had drawn him to the gospel of Jesus Christ. He also got to enjoy watching them sing in person.

“It was a thrilling and inspiring experience for all involved,” Darais said. “We asked him how he was feeling after the Vocal Point rehearsal, and he said, ‘Honestly, I feel like I’m walking on clouds. This was just a dream come true.’”

The experience was also inspiring for the young men in Vocal Point. For group member Hyrum Jackson, the most incredible part of meeting Schlette was seeing God’s hand in his conversion story.

“It was no coincidence Gerry was able to find these videos and feel the Spirit as strongly as he did,” Jackson said. “It was so inspiring to meet him in person. His joy was contagious, and it was so fun to laugh with him and get to know him better.”

Vocal Point member Alex Brown said Schlette’s story drove home a point that Crockett regularly tells the young men: “We are not members of Vocal Point for our own benefit, we are here to be a light to other people.”

“It was very touching to meet him in real life,” Brown said of Schlette. “It brought back the feelings from my mission that we have the opportunity to help people. I know that there are more people just like Gerry searching for the truth, and the work that I put in right now will have an impact sometime in the future.” 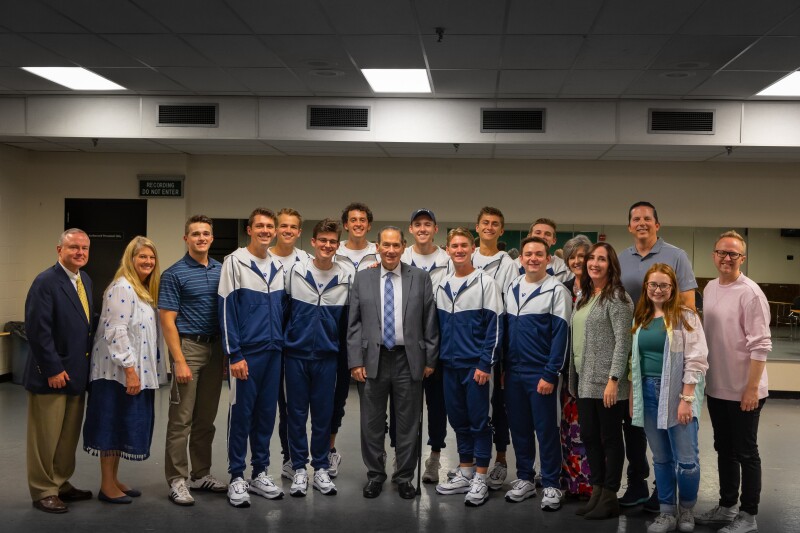 “It has been so cool to become a member and do the things I’ve done. It’s like God put up dominos,” Schlette said. “I got baptized, I got confirmed, I went to the temple, I got the priesthood, and I came out to General Conference all in a matter of about 5 or 6 weeks.”

Before returning home to New Jersey, Schlette also met up with his initial tour guide Braeden Gibbs again to receive a second tour of the BYU campus. Gibbs noted that the first time he gave Schlette a tour, it was just the two of them. But the second time, Schlette brought a huge group, including people from Vocal Point, Church Philanthropies, and BYU Performing Arts.

“It was amazing to see everyone rally around Gerry and to see how he brought this community together,” Gibbs said.

“It has been really interesting to see how the Lord is using Gerry’s story to inspire so many people,” Varney said. “Hearing Gerry’s story has helped me remember that the Holy Ghost is still active, and there are still people who are willing to follow the Lord.”

Varney explained that the amazing part of Gerry’s story is not only his faith but that his story of conversion can apply to everyone.

“The Lord is willing to go to those lengths for every single one of us, and that, to me, is what’s really inspiring,” Varney said. “Gerry is faithful, and he follows the Spirit. To see the hand of the Lord in his story is really the miracle.”

“The gospel has now been able to bless his life, and others through him, in a way never before possible,” Jackson said.

Gibbs said that watching how the gospel has changed Schlette’s life gave him hope.

“Anyone could have answered Gerry’s questions, so it wasn’t just an experience for him,” Gibbs said of the campus tours he gave Schlette. “It was special for me, too.”

Schlette said he is grateful for all the people he has been able to meet and for the blessings of the gospel of Jesus Christ.

“Everything I experience is through the love of God and Jesus Christ, and without them, I wouldn’t be here,” Schlette said. “What I needed, I found in this Church.”