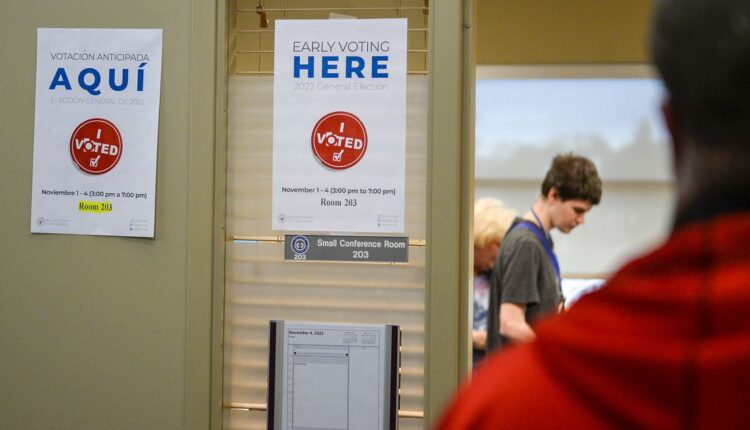 By Tuesday afternoon the figure had climbed to 41%. For perspective, the turnout in the 2018 midterms was 75%, but it’s important to remember that three ballot initiatives spiked turnout that year. In the 2014 midterms, it was 46%.

Keep in mind this current turnout figure does not include what are probably several hundred thousand ballots that have been received and are waiting to be processed, those that are in transit, or votes that will be cast by folks showing up at their polling place today.

At the moment, 44% of registered Republicans have had their ballot processed, compared to 37.5% of Democrats and 27% of unaffiliated voters, which could signal that Republicans are more enthusiastic than Democrats this time around.

It is true that some number of Democrats — we can’t say for sure how many — changed their registration to vote in the Republican primaries, but the trends in voter registrations don’t lead me to believe it is enough to change the percentages in a major way.

So to this point, registered Republicans are accounting for 62% of the ballots cast, Democrats 14% and unaffiliated 20.5%.

In terms of raw registration, 52% of the state is registered Republican, 15% Democrat and 27% is unaffiliated, so we can see that thus far unaffiliated voters are staying home and Republicans make up a larger portion of these early votes.

Again, this is not a predictor of who individuals those voted for, but the electorate thus far.

This could all change, of course, if a flood of ballots rolls in and flips the script. Salt Lake County, for example, has lower turnout right now than most of the rest of the state, with just over 200,000 ballots processed out of 591,999 registered voters as of Tuesday morning. Utah County is also under 40%, while rural counties like Grand, Garfield, and Piute are pushing 70%, and Wayne County is at 72%.

So this early indicator seems to favor Republicans, but there are a lot of unknowns. We’ll need to wait for the returns tonight and, in those close races, the week or two to come.

In a tweet, Weber County Clerk Ricky Hatch said Google was apparently showing that voters could cast their ballots at the Weber Center in downtown Ogden, which is where the clerk’s office is located.

According to the county’s website, the Weber Center was the county’s only center for early voting, which was likely the cause of Google’s mix-up.

In a text message to The Salt Lake Tribune, Hatch said, “Because 98% of Weber County voters vote by mail, we only need one vote center.” He added that the county has only used one voting center since 2019, but this year they added a second voting location in the Ogden Valley.

Weber County’s voter turnout was around 40% Monday night, according to Hatch. He said turnout is lower than in 2020, though he said that’s normal, considering presidential elections typically have higher turnout. However, he added that this year’s Election Day will likely have a lower turnout than in 2018, a year that featured Constitutional amendments and ballot initiatives like Medicaid expansion and redistricting.

“So that was a really busy election, that turnout was about 82%, I believe, in 2018. I don’t think we’re gonna hit that this time,” he said Tuesday morning.

It’s not too late for Utahns to register to vote

If you have been putting off registering to vote and now want to cast a ballot in the 2022 midterm elections, it’s not too late.

Utahns who currently are not on their local voter rolls can still register at voting locations on Tuesday. New voters will need to present one primary form of identification (like a driver’s license or passport) or two forms of ID that show their name and current residence (like a bank statement or vehicle registration).

No early results until all Utahns have a chance to vote

Early election results might not come in as nearly as years past, the lieutenant governor’s office has cautioned.

On Monday, the state’s top elections official issued new guidance to county clerks, directing the local election officials to not post early election results before every Utahn has had a chance to vote. The guidance comes after mail-in ballots in two counties were delayed because of a distribution issue at an out-of-state sorting facility.

“While I’m hopeful early election results will go live shortly after polls close at 8 pm on Tuesday, this guidance may impact the release timeline for results in Utah,” Lt. gov. Deidre Henderson said in the news release on Monday. “Eligible voters deserve the opportunity to cast their ballots without outside influence, including data from preliminary results.”

Who should I vote for?

The Salt Lake Tribune has created voter guides to help Utahns get to know the candidates on their ballot this fall.

The guides include information about Utah’s US Senate and House races, contests in the Utah Legislature, state school board races and several Salt Lake County races.

Check out the voter guides, in English and Spanish, at: 2022 Midterm Elections.

There’s a total lunar eclipse next week: Here are the best places to watch it