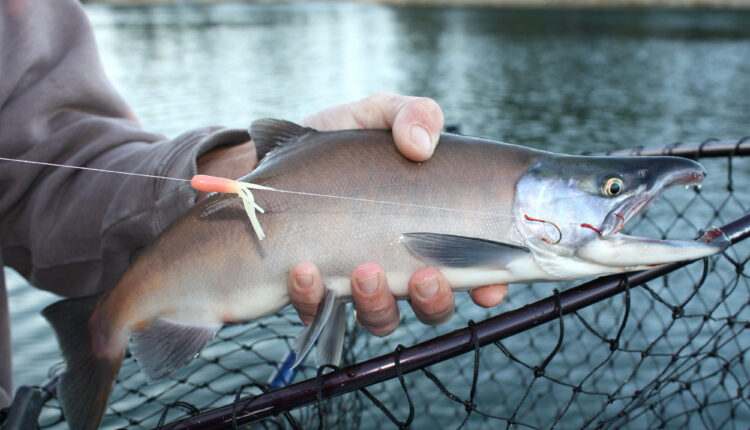 How to Catch Kokanee Salmon

Kokanee represent a strain of sockeye salmon that lives its entire life landlocked in freshwater lakes, rivers and streams. “Kokes” stage spirited aerial battles and serve up sumptuous red-meat fillets. This is largely a seasonal fishery that lasts from spring until about Labor Day.
Ron Ballanti

When it comes to catching kokanee salmon, little of the tackle you own—be it for saltwater or freshwater—will work, and you’ll need to change your thinking about predatory fish and their relationship to food. Yet, if you’re successful, you’ll likely become fixed on this fascinating variety of landlocked salmon. Yes, kokanee gear is very specific.

Just what are kokanee salmon? Kokanee are, in essence, sockeye salmon that live their entire lives in freshwater lakes, rivers and streams. Many populations would never have the opportunity to migrate to the ocean because they live behind dams. Interestingly, however, even in waters where kokanee have access to the ocean, they still remain in fresh water. There are even some places where populations of migrating sockeye salmon join kokanee in fresh water during spawning season — yet they don’t interbreed. A kokanee’s airborne displays both thrill and frustrate. Many fish shake the hook while taking to the air in twisting leaps.
Courtesy Todd Wittwer

Kokanee are native to many lakes in the western United States in places such as Alaska, California, Idaho, Oregon and Washington. They have also been introduced to lakes in Arizona, Colorado, Montana, New Mexico, Utah and Wyoming. In many lakes, kokanee can’t spawn due to lack of stream access.

Kokanee are smaller than sockeye, due to the limited food sources in fresh water. Whether among a sustained population or planted as part of a put-and-take fishery, kokanee salmon live only two to four years. Once at spawning age, they begin to “turn,” much like ocean-run sockeye, transitioning to the trademark red color; Males develop the iconic hump back and hook jaw. In many waters, a 2.5 to 3-pound kokanee salmon is considered a trophy, providing anglers with a spirited fight on downsized gear. Kokanee fillets provide some of the best-tasting fish to emerge from fresh water. Western lakes such as Flaming Gorge Reservoir on the Wyoming/Utah border and Strawberry Reservoir in north-central Utah (where this fish was caught) produce some of the largest kokanee salmon.
Jim Hendricks

Some lakes can produce larger-than-usual kokanee; top among them is Flaming Gorge Reservoir on the northeast border of Wyoming and Utah. The state record 6.31-pound kokanee was taken here back in 2015, evidence of how kokanee size can be affected by conditions and available forage. On rare occasions, individual adult kokanee won’t “turn” during spawning season, enabling them to live and grow for an additional few years. This was likely the case with the IGFA world record 9-pound, 10-ounce “koke” caught on Wallowa Lake, Washington.

Boating anglers have developed an array of specialized equipment, tackle, lures and trolling techniques to find, entice and catch kokes. Success hinges on an understanding that kokanee are plankton feeders, yet the best presentations include a variety of spinners, wobblers, plugs, hoochies and other artificial lures.

“You essentially get bites by making the fish aggressive and angry,” says Todd Wittwer of Kokanee.net Guide Service, based in California’s central High Sierra mountains. I’ve fished many times with Wittwer, and he has taught me everything I know about catching kokanee in my home waters of Bass Lake and Shaver Lake, both located in California’s southern Sierra mountain range. “Kokanee see a lure as a threat to their food source and attack to drive it away. This is why fish often slap at your lure several times before getting hooked. They swipe at your lure once or twice to drive it off. When they see it’s still there, they think, OK, you’re not leaving. I’m going to bite you and kill you.”

That these fish bite out of anger and not hunger affects how anglers pursue them. Popular lures imitate the assorted indigenous fry, minnows and bugs that live in a lake and compete with kokanee for the plankton supply. Wittwer trolls these lures using downriggers, with a presentation augmented by flashy dodgers and multi-bladed attractors that make as much flash as possible to attract the attention of schooled kokanee, making them believe there is a “plankton party” and they’re missing out .

The ability to precisely control the trolling speed and depth of the presentation proves critical to successful kokanee fishing.
Jim Hendricks

Depth and speed control rank as the two most important factors in successful kokanee trolling. Downriggers provide the most accurate depth control, while allowing anglers to add more bling to their presentation with a ball troll flasher—a series of four or five large spinner blades that attach to the downrigger ball itself. One or more line-release clips can be connected to the downrigger cable, usually starting a few feet above the ball. Keep the difference in mind between your ball depth and lure depth when setting the downrigger.

When it comes to kokanee trolling speeds, the slower the better. Speeds from less than 1 mph to about 1.5 mph prove optimal. An electric trolling motor grants the best means of achieving this pace. It’s hard to get an outboard motor to troll slowly enough, even when deploying a trolling plate or other means of deceleration.

In a weird twist, nearly all serious kokanee anglers tip the hooks of lures with kernels of shoepeg corn marinated in a range of available scents such as Pro-Cure Kokanee Special, a blend of herring oil, sweet corn scent, and pure anise oil, or Atlas Mike’s Lunker Lotion Kokanee.
Ron Ballanti

Kokanee lures come in a veritable rainbow of shapes, sizes and colors, generally sharing one trait: Most are rigged so that the single or double hooks are attached to the line, but not to the lure. One exception to this is a vertical jig: Since it is not trolled, it has an attached treble hook.

Kokanee are frenetic fighters and have very soft mouths. Lures designed so the lure body can slide up the line makes it harder for these fish to throw the hook when they jump, shake their heads and roll up in the line.

In a curious rigging twist, nearly all serious kokanee anglers tip the hooks of their lures with kernels of shoepeg corn, marinated in a range of available scents, such as Pro-Cure Kokanee Special, a blend of herring oil, sweet corn scent, and pure anise oil, or Atlas Mike’s Lunker Lotion Kokanee. Tackle companies have recently developed cured or artificial corn alternatives, such as Pautzke’s Fire Corn and Berkley Gulp Corn. While kokanee don’t view lures as food, the addition of scent and texture enhances the illusion of something alive. Specialized rods and reels help keep hooked kokanee on the line. Typical kokanee sticks are 7- to 8-1/2-foot, light-action baitcasting rods with a soft tip section. It’s often possible to bend a kokanee rod into a circle, touching the tip to the end of the butt. This super-soft action cushions the surprising force these small salmon exert, which helps keep the hooks from tearing out.

Any small baitcasting reel works for kokanee fishing, provided it holds a decent at least 100 yards of 8- to 10-pound test monofilament fishing line. A light, smooth drag proves essential, as do telescoping landing nets that reach 8 or 10 feet behind the boat. If you miss netting a kokanee on the first try, you won’t likely get a second chance.

Kokanee school wherever they find the water temperature, oxygen level and food supply to their liking. Summer surface temperatures in Bass Lake, for example, often hit 80 degrees, and that warm water pushes Kokanee 35 to 40 feet down to find their 55-degree comfort zone. For this reason, you need a fish finder. If you regularly mark fish suspended in mid-water, work the area thoroughly before moving away. Even though kokanee might not successfully spawn in many lakes, they still go through the motions. During late summer and early fall, mature fish transition to spawning colors and gather in large schools, often in deep water near tributes. During this time, anglers can pursue them by vertical jigging with 1/4- to 1-ounce spoons. Action turns fast and furious if you can stay right above the fish.

There could be a lake not that far from you that offers a chance to chase these mini-salmon. To find one, check out Kokanee Power[make link: kokaneepower.org], a private non-profit group that assists government agencies with stocking programs and offers information on lakes in California and Oregon where you can fish for kokes. If you do find a nearby kokanee lake, you’ll likely succumb to the one danger of kokanee fishing—running out of room for all the new lures, scents, flashers and other gear in your tackle box.