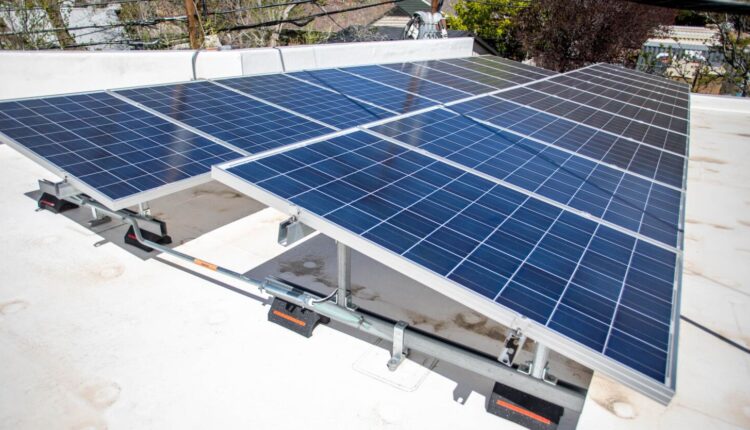 How to get solar energy for your house in Utah | opinion

It started with the best of environmental intentions: making fuller use of solar energy to produce household electricity. Then came the disagreements and even the threat of a lawsuit.

As we began exploring our mutual options, though, we realized there might be a solar solution that more Utahns would adopt — if only more of them were aware of it.

Certainly, there’s a need for all of us to do what we can to help curb the climate change that is hitting our state particularly hard. Renewable solar energy can be a valuable weapon in that battle.

But to start this story at the beginning: Both of us are residents of the Stone Cliff community within St George. Clay Wilkes, a devoted environmentalist, wanted to install solar panels on his roof. LaDel Laub, a governing-board member of the Stone Cliff homeowner’s association, held to the HOA guidelines and ruled against it, on aesthetic grounds.

After the rejection by the HOA, a frustrated Wilkes determined that he might need to sue the homeowner’s association. But discussing the matter further, we decided there might be a way to resolve the dispute — in a potential win for all sides.

As it happens, Laub is also chief executive officer of Dixie Power, the utility company in St. George. He is also a board member of the Deseret Power network, an operator of transmission lines and a coal fired power plant in eastern Utah.

Since 2008, Dixie has operated a community solar farm that could provide solar-generated electricity to Wilkes’ house and as many as 200 others in St George. That was news to Wilkes — despite his environmental awareness and activism.

The more Wilkes learned, the more he realized that letting the experienced power company provide the sun-generated electricity, and letting Dixie manage all the logistics involved, might make more sense than the rooftop approach he’d been considering.

As we continued putting our heads together, we realized that for solar power to really catch on among Utah homeowners, we’d need to spread the word. Which is the point of this article.

It’s fully possible, of course, to put solar panels on your roof, or set up a solar array in your yard. In the sunniest parts of Utah, you could generate a lot of the electricity your home needs. But the sun always sets. And cloudy days aren’t much help either.

So unless someone is willing to live completely off the grid, it is very common to connect your home set-up to the power company’s network. That way, you’ll always have a current. And during the periods when you’re generating your own electricity, the power company will give you credit on your monthly bill.

But managing the hand-offs between the two power sources and doing the necessary monitoring to keep an accurate accounting — all of that involves complex hardware and software that might make many homeowners think twice. Even Wilkes, who has technology patents to his name and who has founded and run a big company, decided it might be better to leave household electricity to the experts at the local utility — as long as it could guarantee to provide him the same amount of solar-generated power that a home set-up could create.

Dixie’s community solar service, where the utility can provide it, works as follows. The consumer signs up for a plan that ensures their household will receive solar-generated electricity as much as possible. The rest of the time, the electricity comes from Dixie’s conventional power plants — most of them fueled by coal. Dixie manages the hand-offs between power sources and monitors the credits accrued each month and adjusts the bill accordingly.

Right now, the solar electricity averages about 2 cents more per kilowatt hour. But as the cost of solar technology continues to fall, and as more consumers sign up for the plans, Dixie expects the price to fall — and hopes it might eventually be even cheaper than conventional electricity.

Besides its community solar operation in St. George, Dixie also has one in Beryl, Utah. A third, and the biggest to date, is under construction in Vernal, Utah, next to a coal-fired plant. Even when the Vernal solar installation goes into operation, though, Dixie will be able to offer its solar plan to only about 2,500 of the 25,000 total residential customers it serves in Utah.

And so, there’s a vicious circle: Unless more households sign up for Dixie’s existing solar plans, the utility won’t have the demand and the financial incentives to continue building and expanding its solar installations.

A similar dilemma exists for Utah’s other main utility companies, including Rocky Mountain Power, the Intermountain Power Agency and Provo Power. All offer community solar plans, but none of them could currently meet the consumer demand if every residential customer suddenly wanted to switch to sun-powered electricity. And right now, much of the solar power generated in Utah is exported to California and other states.

It’s in everyone’s interests for Utah to transition to solar power as fast as possible. So, consumers who care about doing their part to curb climate change — and these days, who can afford not to care — would be wise to explore their local options.

And if their power company can’t yet provide solar power, they should demand that their provider ramp up its solar capabilities. The more households that switch to such plans, the more willing and financially able the utility companies will be to invest in solar power. That demand, perhaps with a little political persuasion, might also help keep more of the solar-generated electricity in Utah.

We might continue to disagree about whether aesthetics should be a reason to reject solar power, if it’s a homeowner’s only option. But before you sue anybody over the matter, take time to find out whether the local utility might actually be able to offer the climate-friendly option you’re seeking. And if not, find out why not — and how soon they can.

Clay Wilkes is co-founder of the Red Crow Foundation, an environmental philanthropy, the beneficiary of the Wilkes Center for Climate Science and Policy at the University of Utah, and was founder and CEO of Galileo Financial Technologies, a company acquired by SoFi. LaDel Laub is CFO of Dixie Power.