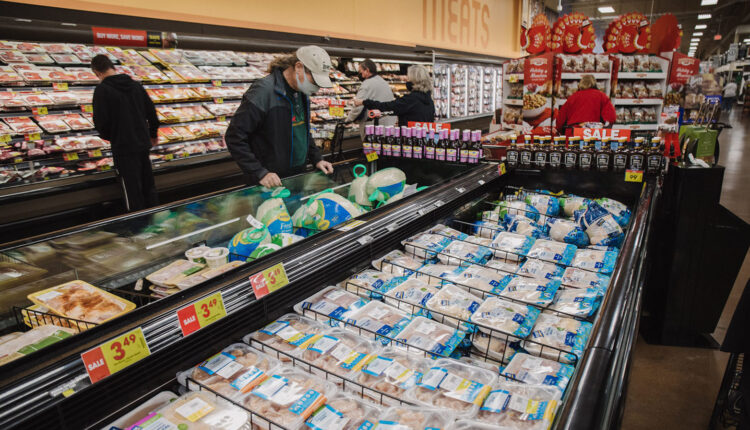 SALT LAKE CITY – Inflation has risen significantly over the last year, but it doesn’t seem to be seriously dampening sentiment in Utah. At least not now. It also depends on who you ask.

According to the consumer price index, inflation rose by more than 5% in the last year. That’s a lot more than roughly 2% of the past two decades.

“It’s much higher than it has been in the recent past and higher than we expected,” said Robert Spendlove, Zion Bank’s senior economist. “Every month we kind of have a forecast of where we think it will be, and in the past few months it has gone even further.”

The question of money. Is inflation a slip or a trend that is weighing on your wallet? #utpol #utecon https://t.co/yiLKo7klnn via @DeseretNews

Unlike the sky-high prices for toilet paper and hand sanitizer, prices are rising across the board.

“Now we’re seeing the same effect, but on a much larger scale. There is everything from wood to oil to used cars and items that you can find in the grocery store, ”said Spendlove.

It may seem easy to attribute all of this to the pandemic or the outcome of the 2020 election. Spendlove finds it pretty easy.

“It’s really related to the pandemic,” Spendlove explained. “We are seeing high demand because everyone is returning to the economy. They want to go out, buy things and do things. ”

Another factor is the disruption in supply chains. Think of the global shortage of computer chips and all the devastation that has caused.

As the nation pushes for higher wages, Spendlove says wage inflation is also a problem. He says that implies inflation expectations and is a kind of self-fulfilling prophecy.

“We are seeing wages increase to keep up with the labor shortage we currently have. As soon as you see those wage increases go up, the higher inflation will be locked in. “

There are currently more than 9 million open positions in the United States, according to the Bureau of Labor Statistics.

do people freak out?

It would be fair to expect widespread concern as the cost of refueling the car goes up and the grocery bill is a little harder than usual on your wallet. Spendlove says that’s not the case right now.

“After the pandemic, consumer confidence is high, business confidence is high, the stock market is doing well,” stressed Spendlove. “Overall, we are not yet seeing any signs that this will have a negative impact on the overall economy, but we are monitoring this very closely.”

However, a recent poll by Deseret News / Hinckley Institute of Politics tells a different story. In fact, this poll shows that 85% of Utahners are very or fairly concerned about inflation. Many of them assume that the effects will be long term.

A new, nationwide poll by Deseret News / @ hinckleyinst found that 85% of Utahners said they were very or more concerned about inflation. | From @DNTechHivehttps: //t.co/zN0xxWFyG4

Is inflation here to stay?

Whether inflation continues or is just a short-term catch is a hot topic among economists.

“It’s the biggest debate in economics, isn’t it. It is one of the biggest debates in our country right now, ”Loveland stressed,“ whether the inflation we are experiencing is temporary or whether it will become permanent. And to be honest, we don’t know at the moment. ”

He says those who believe inflation is a small spike are confident that at some point suppliers will be able to meet demand.

On the other hand, Spendlove says that rising wages will keep inflation going longer than we want them to. He says companies need to raise prices to pay workers more.

“You just step on water,” added Loveland. “That is why high inflation is so dangerous. It eats up the economic benefits of higher wages. You’re just fighting and trying to swim just to catch up. ”

In a week-long series, KSL NewsRadio reports on the effects of supply and demand on inflation in Utah.