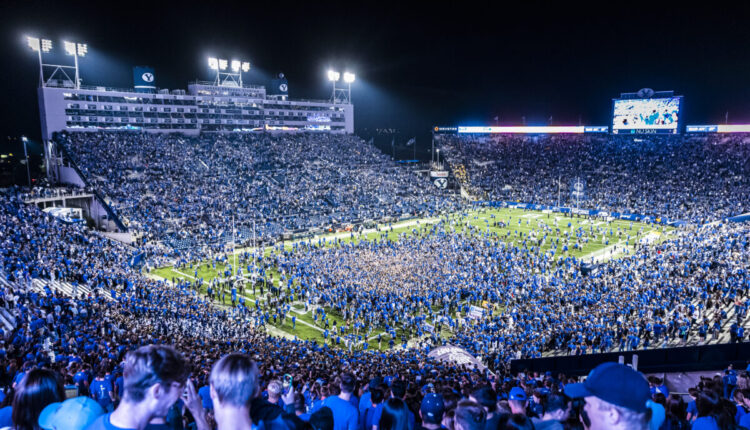 Fans rush the field at LaVell Edwards Stadium after a 26-20 overtime victory against Baylor on Sept. 11, 2022.

BYU fans rush the court at the Marriott Center after a BYU men’s basketball victory against Gonzaga on February 22, 2020.

There’s a scene near the end of the 1987 movie “Overboard” where the four young boys of main character Dean Proffit find out that the woman they tricked into being their mother 1) loves them anyway and 2) is filthy rich. The boys all sit down and start making out elaborate Christmas lists.

“How do you spell ‘Porsche?'” asks one of the boys.

It doesn’t take too much imagination to see BYU’s athletic administrators and coaches doing the same thing now that the Big 12 is preparing to sign a new six-year media rights deal with ESPN and Fox which will eventually be worth perhaps $50 million per team per year.

As a new member of the Big 12 in 2023, BYU’s cut might not be the full payout immediately but whatever their share it’s still significantly more than the $6-$10 million it has been making with their independence era deal with ESPN.

BYU Director of Athletics Tom Holmoe appeared on “BYU Sports Nation” this week — in full Yoda costume and makeup, by the way — to discuss the impact of the rumored deal. BYUSN host Jarom Jordan asked Holmoe, “What does that mean for BYU Athletics? What are you going to be able to do that you haven’t been able to do?”

This was Holmoe’s response: “I think it goes back to the beginning of last football season when we were invited to be part of the Big 12. That’s what it’s all about. That’s what we’re fighting for. We knew that things, if they continued on and went as according to plan, would be better for us. But there’s been some ups and downs and in-betweens with conference expansion and shrinking and expanding and all the different things going on. We weren’t ever sure where this was going to land.

“It hasn’t landed yet. Nothing is really quite official but obviously with the news of the last few days, you can see that things are very, very close. I think what that does, is it gives us opportunities and that’s what we’ve always been waiting for is for our student-athletes to play against the very best week in and week out. We’ve tried to play great competition and we feel we have. Our head coaches and our assistant coaches have tried to put together great non-conference schedules. The WCC has been very good at the top of all the sports and here we are now, getting the experience of having to play tough, tough teams week in and week out.

“We’ve learned a lot this year. We knew it was going to be a transition year with many regards. We didn’t think it would take a left turn as it has. But all of this will be prepared for next year when we are in the Big 12.”

In other words, “none of your business.”

“I think when you look at what happened in the Big 12 last year when they lost a couple of long-time standing members in Oklahoma and Texas, the country and sports enthusiasts everywhere thought it was the beginning of the end,” Holmoe said. “So when (former Big 12 commissioner) Bob Bowlsby went out and got the four of us — BYU, Cincinnati, UCF and Houston — that was a big move. But we weren’t quite sure what that meant. And then (new Big 12 commissioner) Brett Yormark came in and went to work right away immediately to try to put together and make everybody see that this was going to be something different. We’ll see what ‘different’ means, but obviously broadcast partners have thought that this was going to be something special. And we’re all grateful for that.”

It’s not surprising that Holmoe isn’t willing to share any details on how some of the Big 12 money might be earmarked. But after speaking to several current and former college athletic directors, here are some ideas on where BYU might spend the money.

Staffing: A big bulk of the athletic budget will go to not only paying their coaches more competitively but hiring more staff members to support their efforts. Currently, BYU Athletics shows just under 250 employees in their department, including coaches and support staff. By comparison, the University of Texas lists more than 470 employees in their athletic department.

Back in the COVID spring of 2020, BYU had around 240 athletic employees, so some hires and restructuring has already taken place. At that time, Michigan State had 370 employees, Alabama 375, Nebraska 350 and Utah 297.

Expect more hires as the athletic program enters the Big 12.

As for coaches salaries, BYU doesn’t release those numbers but it’s common knowledge that they are underpaid compared to similar positions in the Big 12 and other Power 5 Conferences. It’s unlikely the Board of Directors in Salt Lake City would be comfortable paying top dollar but increases will have to be made. It’s also unlikely BYU will find itself in the position of several Power 5 programs who are paying multiple head coaches huge buyouts when they are fired.

One current athletic director told me sports agents are basically holding college’s hostage when it comes to negotiating coaches contracts. In addition, the spending arms race continues in other sports including college baseball coaching salaries, which are blowing up.

Travel: While BYU football has played all over the country as an independent, there will be a pretty big increase in miles traveled when the Cougars join the Big 12. As for Olympic sports, a typical trip to play a West Coast Conference game takes less than two hours by plane. From Provo to Morgantown, West Virginia, may take more than seven hours. Athletes will be spending more hours away from campus and will be doing more remote homework and assignments, so more tutors will likely be needed. BYU fans will also be traveling extra miles to contests as well.

Facilities: It’s unlikely BYU would build a new football or basketball facility but upgrades would be expected. The university has purchased the land and buildings of the old Provo High School just across University Avenue. The Smith Fieldhouse is getting pretty long in the tooth, so perhaps a new Fieldhouse on that site could be in the works.

Recruitment: This is a big one. BYU athletic teams need more eyes on recruits and need to be able to spend more money visiting more recruits more often. It will never approach what the likes of Alabama or Texas A&M are spending on recruiting. Those schools send coaches and recruiters on private jets to visit high school prospects and BYU coaches will still be renting cars and racing through airports to make connecting flights on recruiting trips.

Even with more money BYU still has a limited pool of recruits it can offer. One former athletic director said where the Cougars can make some progress is by attracting more top athletes who are members of the church who may have opted to go elsewhere when BYU was not a member of a Power Five conference.

More money could also go toward increasing the “wow!” experience when a recruit comes to campus.

Tanker crashes into barrier on I-84, spills hot tar near Mountain Green