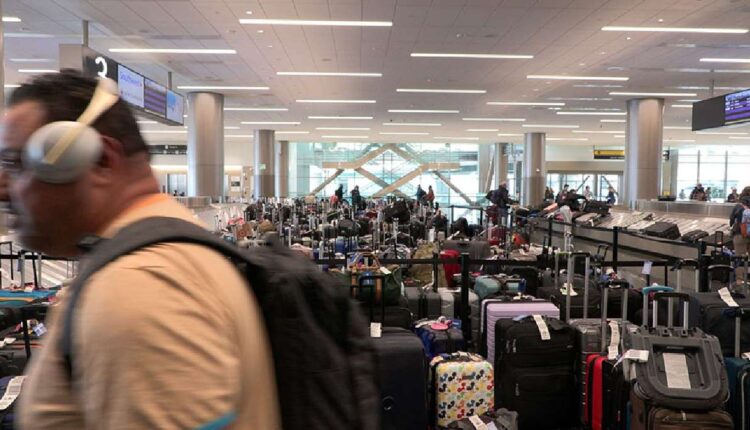 SALT LAKE CITY — Anyone who often travels through airports knows that feeling. Waiting and hoping your luggage shows up at baggage claim can test even the most patient person.

And it’s a relief when you see it.

“I finally got my bag,” said Donna Stackman. “I never thought I would see it again.”

For many people like Stackman, her bag was waiting for her at Salt Lake City International Airport.

Stackman was flying Southwest Airlines and has dealt with cancellations for several days. She and her husband decided to drive back to Salt Lake from Las Vegas because of more flight cancellations.

When she found out her bag had made it to Salt Lake, Stackman decided to go to the airport to pick it up.

“It has been horrible, but you know what? It can always be worse,” she said. “We are home and we are safe.”

Jacob Roundy’s bag is one that’s still in limbo.

“This all started last Sunday,” he said.

KSL-TV found Roundy because his phone number was on his bag, so we decided to call him.

He answered and didn’t know his luggage was in Salt Lake City until we contacted him.

“I had no idea where it was. I was hoping it would be making its way back here,” he said.

Roundy lives in the Houston, Texas, area. He is a student at BYU-Idaho in Rexburg and was trying to get back to school from Houston to Salt Lake on Christmas Day.

“The captain came on the intercom and said, ‘Hey, sorry, but this flight is actually canceled, so y’all need to get off the plane and good luck,” said Roundy with a laugh.

All his flights that day, including re-bookings, were canceled. He decided to wait in line to find out where he could pick up his luggage.

“I saw the longest line I had ever seen in my life with everyone trying to get their baggage from their canceled flights,” he said.

Jacob Roundy speaks to KSL-TV via video chat about not knowing where is bag went. Roundy is in Houston for the holidays, but KSL found his bag at Salt Lake City International Airport. (Photo: Meghan Thackrey, KSL-TV)

Roundy waited in line for four hours only to be told his luggage couldn’t be taken off the airplane because there was not enough staff for all the luggage or room to put the bags.

He says a Southwest Airlines baggage agent told him his bags would be on a flight to Salt Lake City but would be rerouted back to Houston within two days.

It’s now been four days and his bag is still in a row of bags at Salt Lake City International Airport.

“My toothbrush is in there,” he said with a laugh. “I’m glad that it’s not lost. I’m glad that I know where it is now.”

Roundy is scheduled for another flight to Salt Lake City on Sunday, as school starts again on Wednesday.

He’s hoping his bag is waiting for him in Salt Lake City and not rerouted somewhere else to get back to Houston.

“I’ll call them to let them know where my bag is, but we will see. We will see,” he said.

Ice fish? Check out ten Utah tournaments and seminars; plus, time for the burbot bash