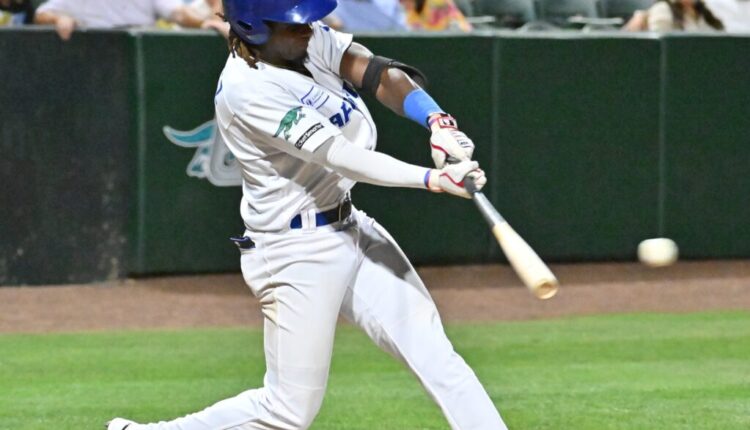 Ogden Raptors shortstop swings on his game-winning RBI single to beat the NoCo Owlz 3-2 on Tuesday, Aug. 16, 2022, at Lindquist Field in Ogden.

OGDEN — The Ogden Raptors and Northern Colorado Owlz played a strikingly similar game in Sunday’s series finale as they did in Tuesday’s opener: low-scoring with two strong starting pitching performances.

The game ended almost the same way, too, but with a little more flair. Tuesday, Raptors shortstop Jesus Valdez knocked a game-winning, walk-off RBI single for a 3-2 win.

Valdez again took matters into his own hands Sunday by blasting a solo home run to left field to lead off the bottom of the ninth. His celebratory bat flip had so much juice it nearly hit several teammates coming out of the dugout to watch his no-doubt winner, and the Raptors were 5-4 winners.

The victory delivered a 4-2 series win for Ogden in a week that saw three of the six games decided by one run and a fourth tied and decided by Knockout Round.

Tuesday, both teams got eight strong innings out of their starters (Ronny Orta for Ogden, Will Buraconak for Northern Colorado) and the game went to the ninth tied 2-2 where Valdez won it with a single.

Sunday, Ogden (45-33, 16-14) handed the ball to Riley Ottesen and he gave the Raptors six scoreless innings, pitching around three hits and two walks with six strikeouts (and catcher Sonny Ulliana also threw out three baserunners on the day ).

He left with a 2-0 lead thanks to a swing from Ogden first baseman Matt Warkentin. Northern Colorado (28-46, 11-18) again had Buraconak on the mound and he only gave up two hits through six innings. But one came in the first when, after Buraconak walked Reese Alexiades with two outs, Warkentin lined a laser homer to right-center for a 2-0 lead.

The Owlz quickly erased that when Ottesen departed for Chance Benton, who immediately surrendered a two-run homer to Ty Lewis in the seventh for a 2-2 score.

Ogden regained the lead in the bottom of the seventh, breaking through against Buraconak for three hits. One from Logan Williams scored Valdez, and Williams later scored on a double-steal with Josh Broughton to put the Raptors up 4-2.

Adam Scoggins made his Ogden debut and got out of that seventh inning, but ran into trouble in the eighth. The lefty is a recently released Dodgers prospect out of high-A Great Lakes and threw well until one swing, a two-run homer from Abdel Guadalupe, again tied the game 4-4.

Ogden closer Jackson Lancaster pitched a scoreless ninth, striking out three to pitch around a leadoff single and a hit-by-pitch.

That set up the bottom of the ninth, where Ogden tried to avoid a decision via Knockout Round (the Raptors are 0-4 in Knockout this season). Valdez delivered with his big fly.

Ogden next hits the road for a six-game series Aug. 23-28 in Colorado Springs against the Rocky Mountain Vibes.