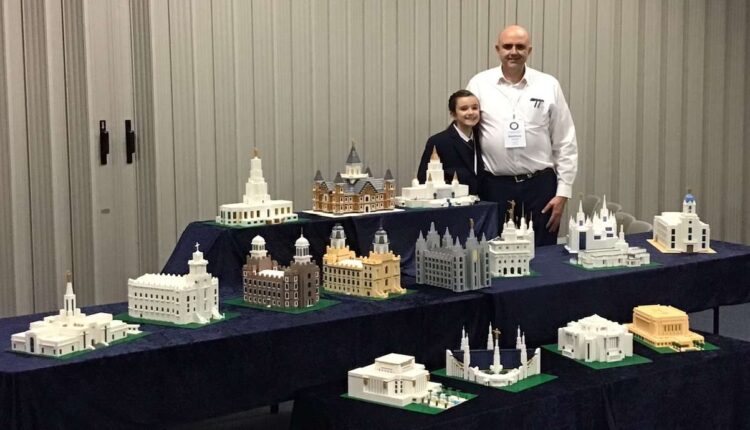 Keep the temple in mind with this fun, family-friendly activity

Matthew and his daughter from Australia. (Brick’em Young)

If there’s a gift that works for both the boys and girls in your family—and keeps everyone equally entertained—most parents would be thrilled. Gender norms aside, building sets are great entertainment for boys and girls, teens and adults.

Suzanne Calton says her Latter-day Saint temple-building kits are not only popular among all age groups, but of all the photos submitted to her, nearly half are built by girls, moms and even grandmothers!

So whether you want a good STEM activity for your child or something to keep your teens engaged on Sundays, Brick’Em Young building sets are a great way to spend time together building family memories.

Brick’Em Young began in 2014 with the Calton family’s desire to teach their children about the importance of temples while living in Shanghai, several hours away from the nearest temple in Hong Kong.

Inspired by their son’s love of small plastic building blocks, Suzanne and Tim Calton decided to create and sell a large model of the Salt Lake Temple with about 1,500 pieces.

Eight years later, both their family and their temple model collection have grown. The Caltons have expanded the number of temple sets to include more than a dozen models, with new sets and figurines added each year. Since the pandemic, the Caltons have moved back from China to the US with their two sons and three adopted Chinese daughters.

Not only has this venture helped teach about the importance of temples, but it’s created an opportunity for families to disconnect from electronics and spend time interacting and growing closer together.

“Many parents have expressed excitement about having a project for their children to do that does not involve electronics,” said Suzanne. “It makes an ideal gift as it connects faith, family and fun.”

The larger temple sets take anywhere from 3-6 hours, depending on the design. A smaller Salt Lake Temple set is also available for younger builders with a build time of an hour.

This inspired Suzanne to expand beyond the traditional nativity and create two international-style nativities: African and Asian. These nativities are not meant to depict the actual circumstances surrounding the birth of the Savior, but rather show how this marvelous event might be understood by another culture similar to the displays at Temple Square. This Christmas season Brick’Em Young is offering a Buy 1 Get 1 Free on these international-style Nativities.

In addition to their temple sets, the Caltons released a variety of bible figurines, including Noah’s Ark, Jonah and the Whale and Moses figurines — perfect for the current “Come, Follow Me” focus on the Old Testament.

Kids and even newly returned missionaries have enjoyed building these model sets. Brick’Em Young’s Black Friday promotions start today! Every product on the site is discounted. Visit their website right away to connect Faith, Family and Fun in one activity with Brick’Em Young!