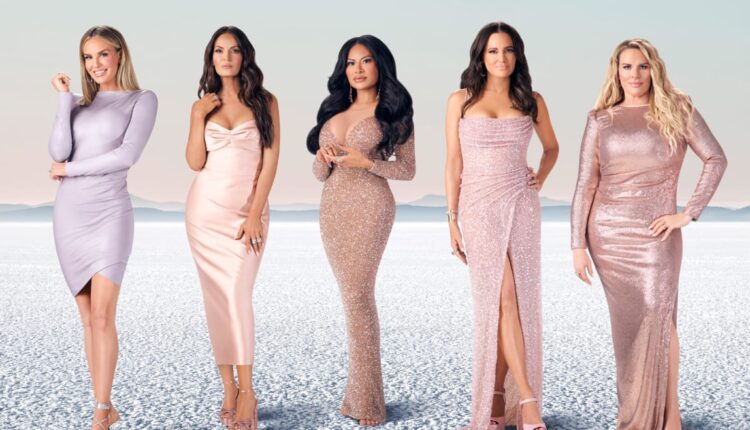 Each episode of The Real Housewives of Salt Lake City is a foray into Housewives Mad Libs, proving that the bounds of reality blow fiction out of the water.

After one of the most exhausting seasons in the franchise’s history on The Real Housewives of Beverly Hills, it’s refreshing to sit back and watch five of the worst people you’ll ever see squabble over incoherent drama.

As the second youngest installment in the franchise, RHOSLC sheds the thin veneer of the Housewives archetypes. Gone are the days where shows are edited around one villain. Yes, the series has perhaps the franchise’s biggest villain in Jen Shah, who pled guilty in July to wire fraud for her role in a high-profile telemarketing scam and faces more than a decade in prison. But in the snowy slopes of the city, Shah’s plot only scratches the surface.

It’s not that the women are less image-conscious than the cast of other cities. It’s quite the opposite, really. RHOSLC stands out in that it’s abundantly clear each cast member has spent years training for the role. Whereas Vicki Gunvalson entered The Real Housewives of Orange County blind and gradually grew into a screeching, iconic villain who defined the franchise, Shah came barreling into Salt Lake City with a bag of rehearsed one liners and camp confessional looks.

It’s almost funny, then, that the most rehearsed cast is so unhinged. While it’s easy to make the case that Kenya Moore plays up her villain role on The Real Housewives of Atlanta, the women of RHOSLC are purely authentic in their thirst for fame and villainous quests to achieve it. And like most great villains, the cast all see themselves as the rightful protagonist. That’s really what makes the show so revolutionary.

I could argue Lisa Barlow, the people’s princess, is really just a misunderstood, tell-it-like-it-is fashionista. But she’s also a deeply self-centered woman who called her best friend a “piece of shit garbage whore.” Of course, that’s what makes Barlow a star, but let’s not pretend she’s making a run for Miss Congeniality.

Season 2 of the show, RHOSLC’s ascension into a Housewives staple, truly skewered each snowflake-holder, creating the most magical dumpster fire. One episode had us rooting for Barlow to expose Mary Cosby’s church as a cult, standing up for her friend who was allegedly defrauded by the church. But before Lisa could even soak in the protagonist role, she flip-flops and accepts a designer gift from Mary while throwing Heather Gay under the bus.

And then there’s Meredith Marks, whose disgust towards Jen Shah for allegedly defrauding elderly people was perhaps the only rational reaction to Shah’s arrest. But a season later, Marks is a fervent #ShahSquad member, standing behind Shah even after she pleaded guilty.

When Lisa Rinna’s mom died on this season of RHOBH, the cast rallied around her, even as she upped her villainy to the nth degree. When Marks missed a bus trip to attend her dad’s funeral on RHOSLC, Whitney Rose and Gay spun it into a conspiracy theory of how Marks was using the timing of his funeral as a shield to call the feds, leading to Shah’s arrest.

Meanwhile, in the Shah corner, everyone’s favorite fraudster led a crusade against friend-of the Housewives, Angie Harrington, at Gay’s choir auditions, after Harrington revealed her husband ran a troll account with the username “ShahExposed.” The plot begs the age-old question: what’s worse, a federal criminal who defrauded the elderly or a man who trolls women on Instagram? It might just be a draw.

There’s nothing weirder than the Housewives fans who spend their time trolling the cast members’ social media. Especially when it’s a side character’s husband.

Maybe the show’s greatest strength is how seriously the women take each other in the face of such absurdities. More than any other franchise, the RHOSLC women seem to view the show as a chess game, strategically moving their pieces around to achieve checkmate (or maybe just center snowflake). The series is post-reality reality TV, and the franchise is all the better for it.

It’s virtually impossible to leave an episode with more clarity than you entered with. The women are all fight, no flight, with such bizarre motivations that it’s best not to question, and instead marvel in the greatness. Abandoning any status quo, RHOSLC serves as Real Housewives: Oops! All villains. Each episode traverses a decade of plot, alliances shift scene to scene, and the basis of reality has all but dissipated.

As the show hurtles toward the second half of the season, the midseason trailer promises further drama as friend-of Danna Bui-Negrete goes against Shah and the mystery of Gay’s black eye takes center stage, all coalescing around a Marilyn Monroe-themed dinner party . That, simply put, is cinema.

Read more at The Daily Beast.

Get the Daily Beast’s biggest scoops and scandals delivered right to your inbox. Sign up now.

Keep the temple in mind with this fun, family-friendly activity