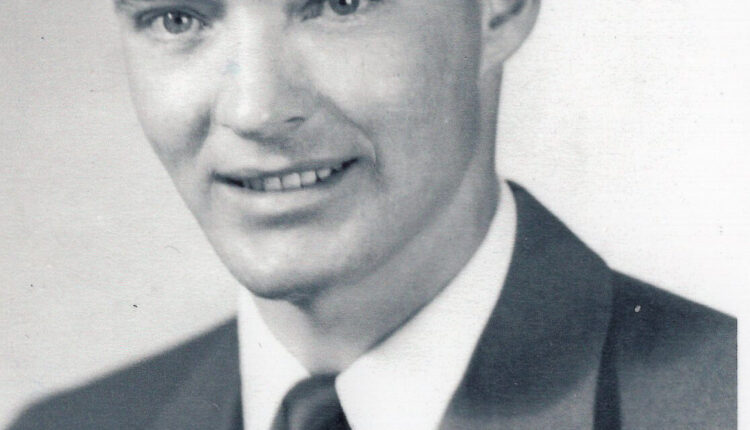 Kenneth Wayne Walker, age 93, passed away on Feb 16, 2022, in St George, not wanting to be separated from his lifelong sweetheart Joann, who passed away three days earlier.

He was born on Oct. 15, 1928, in Alterra, Uintah County, Utah to Joseph Darrel (JD) Walker and Dorothy May Griffis Walker. He was the fourth son of JD and Dorothy, and just 30 minutes younger than his twin brother Keith.

Ken spent his childhood in Roosevelt and enjoyed hunting, fishing, swimming in the canal, going to the movies, and riding his bike (which he shared with his twin brother – they took turns every other day). As a teenager he worked at the soda pop bottling factory and bought his first car, a Graham Page, with his brother Keith.

After graduating Roosevelt High School in 1947, Ken enlisted in the US Air Force and served during the Korean War. His service was spent as a cost analyst technician at Hamilton Air Force Base outside San Francisco and later Wiesbaden Air Force Base in Germany. He was honorably discharged in 1952.

In 1960 the family moved to Salt Lake City, where Ken worked for the State of Utah Department of Transportation and later the Department of Agriculture. There he worked in weights and measures in the gas lab, testing gasoline samples collected from local gas stations. He retired in 1990 after 30 years of service. Ken and Joann moved to St George in 1997 and lived there for the next 25 years.

Ken enjoyed being very active in his whole life. He loved fishing, hiking, photography and, of course, his motorcycle, a Honda Goldwing Interstate (which he regarded as the ‘Cadillac of motorcycles’), on which he and Joann traveled extensively throughout the western United States.

Left to honor Ken and remember him are two daughters, Karen Walker Gilbreth and Janet Walker Miller. He was preceded in death by his parents; twin brother, Keith Walker; older brother, Robert (Bob) Walker; daughter, Vicki Walker; and his wife, Joann. He is also survived by a brother Lynn Walker; nine grandchildren; and seventeen great grandchildren.

A private service will be held at the Metcalf Mortuary and internment will be in the City of St. George Cemetery on Feb. 25, 2022.