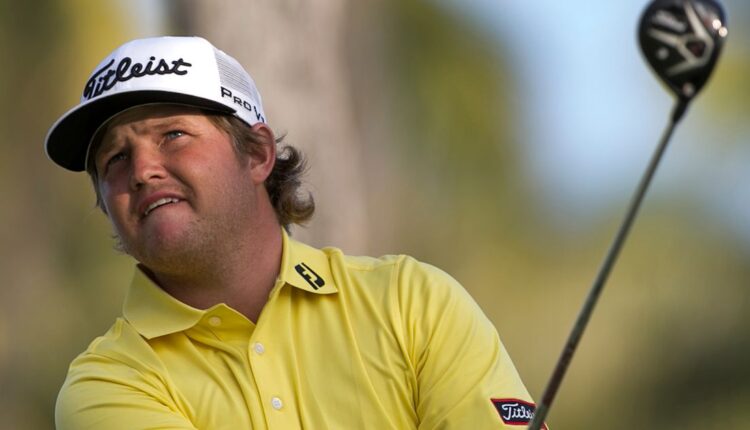 Five former Cougars are scheduled to tee off in the event, part of the largest Utah presence the tournament has ever had.

(Marco Garcia | AP) In this Jan. 15, 2016, file photo, Zac Blair follows his drive on the 18th tee box during the second round of the Sony Open golf tournament in Honolulu. Blair is one of five BYU golfers who will be part of the Korn Ferry Tour’s Utah Championship this year.

By Kurt Kragthorpe | Special to The Tribune

Farmington • The field of the Utah Championship, one of the original tournaments on the PGA Tour-brand schedule that’s now known as the Korn Ferry Tour, will have more of a Utah presence than ever.

Fishburn is a second-year player on the tour, battling for a spot in the Korn Ferry Tour Finals that begin in mid-August. Blair, who last played the PGA Tour in October 2020, has shown great progress in his rehabilitation from shoulder surgery and will make a fourth KFT start at Oakridge in preparation for his return to the PGA Tour in September.

Daniel Summerhays, who mostly has stepped away from life as a touring pro, received a sponsor exemption to play on his home course. So did Kuest, who has conditional status as a Korn Ferry Tour rookie, and Lundell, who will remain an amateur through the 2022-23 school year. The other exemption went to Patrick Flavin, who’s known for his remarkable ability to qualify for Monday for PGA Tour events this year.

The Utah Championship’s history dates to 1990 in Provo and has been staged in Farmington since 2017. The 72-hole event starts Aug. 4.

Fishburn will be a focal point at Oakridge, as the Utahn with the most reasonable chance of advancing career via the Utah Championship. As what he labeled “a crazy year” moves into the last two events of the regular season, he’s no. 71 in the KFT standings. The top 75 will advance to the Finals, with an opportunity to earn one of an additional 25 PGA Tour cards for 2023.

Last summer, Fishburn finished the top 75 by one stroke, thanks to a combination of barely making the 36-hole cut in the Utah Championship and tying for fourth place in Omaha, Neb.

He’s actually ahead of where he stood as of this time last year, even in a season when he missed five of cuts at the start. He had another stretch of six misses in seven events, partly attributable to back problems. Yet he’s also enjoyed a run of six made cuts, including four top-25 finishes, and matched his best showing of a tie for 13th place last weekend in Springfield, Mo.

“I do feel like I’ve improved a lot this year with consistency — even though it doesn’t sound consistent,” said Fishburn, who turned 30 last week. Hey’s No. 7 on the tour in greens in regulation at nearly 75% and is driving more accurately.

If not for the sponsor exemption, Kuest would have had to go through Monday qualifying at TalonsCove Golf Course in Saratoga Springs, where other Utahns will have an opportunity to earn one of eight spots in the Utah Championship. The former Cougar All-American has made six cuts in 11 starts with his limited status, with his best finish a tie for 38th.

Lundell will get a taste of pro golf at Oakridge, after choosing to stay at BYU for a fifth year as the NCAA allowed when the 2020 college golf season was halted due to the pandemic. “The support we have at BYU is unbelievable,” Lundell said, “and I just felt like it was by far my best option to come back — further my game, work on some aspects and see if I can have another great year.”

Lundell was the medalist in an NCAA Regional event, leading the Cougars to the NCAA Championships, among several strong showings in 2021-22.