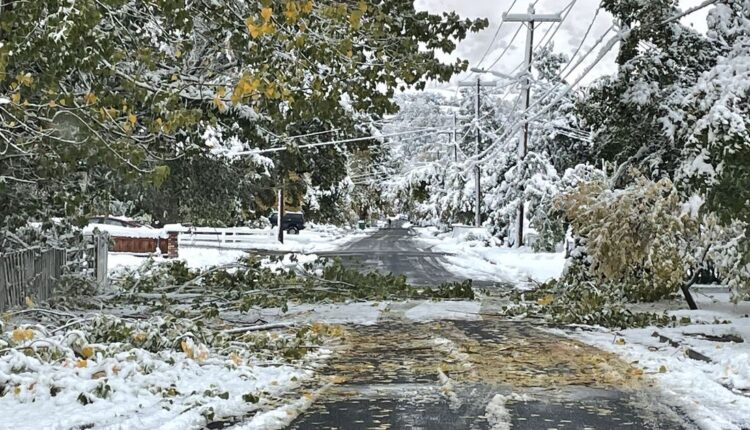 Expect a hard freeze through Wednesday morning in several parts of the state.

A winter storm that hit two months before the start of winter caused snow to fall in northern and southwestern Utah on Tuesday, creating dangerous driving conditions, lost power and closed some schools.

Lake-effect snow is possible in some parts of the Wasatch Front by early Wednesday, according to the National Weather Service. How much snow may fall, however, remained unclear.

A winter storm warning is in effect for the mountains of Utah through Wednesday at midnight, with winter weather warnings for valleys in central and southern Utah.

Salt Lake City will get mostly sunny and mid-40s on Wednesdays before another storm hits with a 50% chance of snow and temperatures in the low 40s. St. George will see sunny skies this week and temperatures slowly rising to the mid-1970s by Saturday.

The Logan City Police Department posted several photos on Twitter showing how messy the streets were, pointing out that several agencies were “busy setting priorities and solving problems in the city.”

Here are some pictures from Logan City. Electricity, road, fire and police forces are busy setting priorities and solving problems in the city. pic.twitter.com/ipqjvsiFwu

The National Weather Service reported that 11.5 inches of snow fell on Logan overnight from Monday to Tuesday. Other amounts of snow include 11 inches at Solitude Mountain Resort in Big Cottonwood Canyon; 7 inches in Cedar City; 4 inches in Enoch; 3.3 inches in Park City; 2.7 inches at Newcastle; 1.8 inches in Oakley; 1.5 inches in Oak City; and 1 inch in Kanab.

Class times have also been postponed at Utah State University and Dugway School in the Tooele County School District.

Little, if any, snow fell in the Salt Lake City area on Tuesday, even though the rain made the roads smooth.

In Big Cottonwood Canyon, Guardsman Pass has been closed “until further notice,” according to the Utah Department of Transportation. At Snowbird in Little Cottonwood Canyon, a time-lapse video showed that about 18 inches of snow fell at the resort as the storm progressed.

In Utah County, too, the Alpine Loop between American Fork and Provo Canyon was closed due to snow.