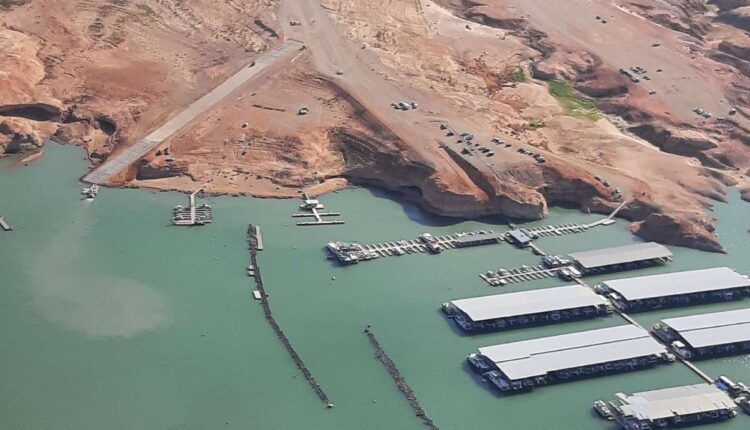 An undated aerial photo of the Bullfrog North Launch Ramp. Glen Canyon National Recreation Area announced on Nov. 21 that it is closed to large vessels and houseboats until further notice. (National Park Service)

Park officials closed the Bullfrog North Boat Ramp on Nov. 21, after water levels fell to 3,529 feet elevation above sea level. It will remain open to smaller vessels unless levels fall another 4 feet. Per the park’s website, the closure once again leaves the Wahweap Stateline Auxiliary Launch Ramp as the only available ramp for large vessels.

Michelle Kerns, the acting superintendent for the Glen Canyon National Recreation Area, noted that the ramp closure comes at the end of the normal boating season. While visitation is generally highest during the summer, the park draws in tens of thousands of people every month from late fall through winter and into early spring, according to National Park Service data.

Kerns explained that efforts to extend the Bullfrog North Boat Ramp and conditions this summer allowed the ramp to remain open through the boating season.

“We are grateful for the many people who have an interest in recreation on Lake Powell and thank everyone for your understanding and patience during the drought-induced, unprecedented low water levels in 2022,” she added, in a news release.

Lake Powell is listed at 3,528.1 feet above sea level, and is about 23.5% full, according to the Utah Division of Water Resources. That’s nearly 14 feet below the levels recorded at the end of November 2021, per US Bureau of Reclamation data. Its decline is occurring as about 70% of the West remains in at least moderate drought, and nearly one-fifth of the 11 Western intercontinental states are listed in at least extreme drought conditions, according to the US Drought Monitor.

Levels fell to a low of 3,522.7 feet in May before rising back up to nearly 3,540 feet over the summer, after measures were taken earlier this year to keep water in the reservoir and to release water from Flaming Gorge so it could flow into Lake Powell in in addition to the regular snowmelt runoff season.

Dropping reservoir levels have been a cause for concern throughout the region. It has led the Department of Interior to focus heavily on the Colorado River, especially Lake Powell and Lake Mead, in recent months. Federal officials announced last month that they may reduce downstream releases from Lake Powell to help ensure that the dam continues to meet conditions to produce hydrologic power.

Feds also unveiled a plan earlier in October to pay water users in Arizona, California and Nevada to use less water so water can remain in Lake Mead. Both of those measures followed a 24-month survey of both reservoirs, which prompted a call for states that use the Colorado River to reduce their consumption.

Lake Powell isn’t only a vital power source, it’s also a major economic driver for the communities around the reservoir, near the Utah-Arizona border.

More than 3 million people visited the lake last year despite falling water levels. Park officials noted that 2021 visitation supported nearly 4,000 jobs, as well as $410 million in economic output. This year, over 1 million people have visited the Glen Canyon National Recreation Area; however, the exact number is unclear. Visitation numbers are updated through the end of June, according to National Park Service data.