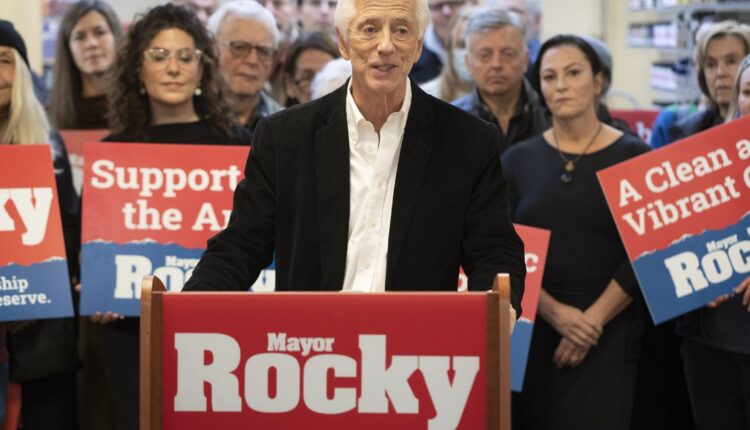 Former Salt Lake City Mayor Rocky Anderson said Utah’s capital has descended into a ruinous state since he left office in 2008, but he can fix it if voters give him another chance in City Hall next year.

In a transcript of prepared remarks delivered at a State Street salon Wednesday afternoon, Anderson officially announced his bid for a third term more than a decade after leaving office.

Anderson said he’s tried — and failed — to get the mayor and certain members of the City Council to solve the city’s problems.

“Because of their do-nothing attitude, because of the mayor’s lack of candor and accessibility, and because of the deterioration of our city resulting from an absence of effective leadership,” Anderson said, “I have determined that, with the support of many conscientious people in the community, I am running to once again serve this city as its mayor.”

Anderson said he initially ran in 1999 because he was passionate about the changes he could make in the environment, policing, housing, long-term planning, diversity, youth programs, restorative justice and combating sprawl, pollution and corruption.

During his tenure, he accomplished much of what he set out to do, he said, but added the city has taken a turn for the worse since he stepped away.

“Now, our city is degraded, crime-ridden, dangerous, filthy in many areas, and toward the members of the homeless cruel community,” he said, “without even a coherent plan from our mayor.”

Anderson said he has a proven record of success leading the city’s executive branch, pointing to his work substantially reducing greenhouse gas emissions, implementing restorative justice programs, diversifying the city’s workforce, providing housing and services for chronically homeless Utahns, investing in infrastructure and advocating for the expansion of public transit.

And unlike Mayor Erin Mendenhall, he said, he pulled it all off without raising property taxes.

If voters rehire him, Anderson said, he would improve transparency by holding monthly meetings with the public, revive the International Jazz Festival, repair and reopen the Seven Canyons Fountain at Liberty Park, and restore the once-popular curbside cleanup service that was terminated years ago.

He also vowed to do a better job dealing with the city’s weightiest problems.

“When I am mayor again, with better leadership at the Salt Lake City Police Department, we will once again set a goal of an average of 6 minutes or less for the police to respond to a Priority 1 call — and we will attain it, as we did before.”

Anderson said the progress in policing he made as mayor has been reversed since he left office, citing two controversial encounters — one from January, when a 40-year-old woman died after being restrained by officers, and another from 2020, when police shot a 13-year-old boy with autism (the nonfatal shooting resulted in a $3 million settlement).

Anderson accused Mendenhall and police Chief Mike Brown of misleading reporters and the public about violent crime statistics during a news conference in October, saying the data they used was cherry-picked to paint a picture that was rosier than reality.

Anderson pledged to restore the city prosecutor’s office and implement restorative justice initiatives if he is elected.

He noted the frustration of one business owner who was fed up with the city’s lack of responsiveness to issues arising from homelessness.

Anderson said he opposes jailing or imprisoning people who can benefit from programs but doesn’t want the city to turn a blind eye to “destructive, dangerous, illegal conduct and allow it to continue.”

The former mayor called for an end to the “cruel, inhumane, repetitive police raids and evictions of homeless people from their camps” until there are other options for them.

Late Tuesday morning — just more than an hour before Anderson’s announcement — Mendenhall and others from the city, county and state gathered to tell reporters about a trip elected officials took to Miami to research a successful homelessness response program.

If voters send him back to City Hall, Anderson said he would set up one or more legal homeless camps to stop makeshift camps from cropping up across the city.

A legal homeless camp has been touted by two sitting west-side council members and was one of the highlights of a homelessness response plan released in October by the Pioneer Park Coalition. Anderson attended that plan’s unveiling but did not speak during the news conference.