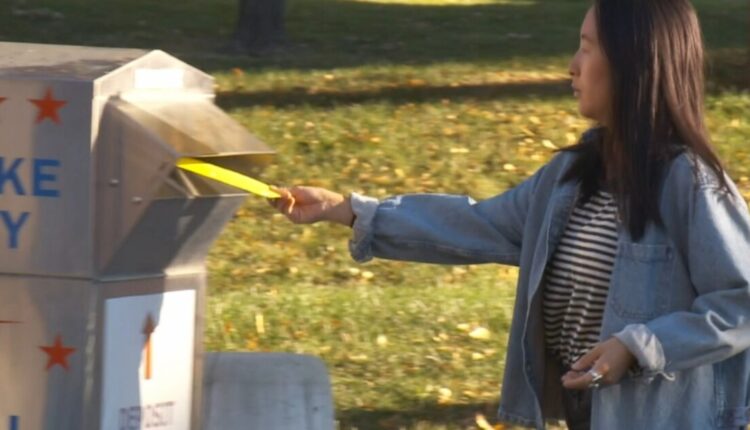 SALT LAKE CITY — In Senate District 9, the candidates are knocking on doors and hosting meet-and-greets to lock down voters ahead of next week’s primary.

Sen. Derek Kitchen, D-Salt Lake City, knocked on doors in a neighborhood and urged them to consider him in the Democratic primary.

“You’re going to see us everywhere. We’re knocking out on doors, we’re calling voters, we are texting voters, we’re on social media,” he said in a recent interview with FOX 13 News.

Across town, his primary challenger, Dr. Jennifer Plumb, held an event at The Ruin where she met with people about her race.

“This is a newly defined district that runs from the lower Aves to 1700 South and Redwood Road up Emigration Canyon,” she said.

This is one of the most closely-watched legislative races in the state, said Jason Perry, the director of the University of Utah’s Hinckley Institute of Politics.

“That race is one that everyone in Salt Lake City should watch,” said Perry.

dr Plumb, a longtime community activist most known for her work on drug harm reduction, is going up against the incumbent Sen. Kitchen, himself known for his political activism (he was the lead plaintiff in the lawsuit that overturned Utah’s same-sex marriage ban) . It’s the second time the two have faced off. Sen. Kitchen won by 550 votes against Dr. Plumb in the 2018 primary.

“I’m the kind of leader that will be working for them, and will do the things and hope and actually demand of their future leaders,” Dr. Plumb said of what she’s telling voters.

“I am the only millennial in the Senate and I’m the only LGBTQ person in the entire Utah legislature,” Sen. Kitchen said. “I believe representation matters.”

Across the state, some primary races will be hotly contested. Right now, members of Senate legislative leadership have been forced into Republican primaries, including Senate Majority Leader Evan Vickers, who is facing Patrick Larson for the district that spans from Cedar City north to Delta, and Senate Majority Whip Ann Millner, who faces Doug Durbano for the district that represents the Ogden area. Senate Budget Chief Jerry Stevenson has a primary challenger in Betty Young to represent the Layton area.

Perry said it’s not something that has happened for a while, with powerful incumbents facing primary challengers.

“There’s really no, sort of, reverence for who’s in the office right now. Not only are the politics more conservative, in some cases more liberal, but they’re also just going after the mainstream elected officials in both of those camps. That’s a trend we may see going forward all the way into the general election,” he told FOX 13 News.

Another example of that is Sen. Gene Davis, who faces a tough Democratic primary battle against Nate Blouin. This is believed to be Sen. Davis’ first primary since he was elected to the Utah State Legislature in 1987.

In the House of Representatives, many sitting lawmakers are facing challengers from more right or left-leaning camps of their own party. In both chambers on Utah’s Capitol Hill, open seats have also led to some closely watched primaries. Perry pointed to races in the St. George area and Cottonwood Heights.

“Sen. Jani Iwamoto is stepping down,” he said of the Democratic primary for Senate District 14. “And the person that replaces her is going to really impact what happens on the hill.”

That race is between Rep. Stephanie Pitcher, a prosecutor who is leaving the House seat to run for the open Senate seat, and Deondra Brown, a musician and longtime crime victim rights advocate.

In southern Utah, the race for House District 73 is already a little complicated. Rep. Travis Seegmiller, R-St. George, has resigned from office because he’s moving out of the district (and recently struck a plea deal to poaching-related charges). The Washington County Republican Party picked his replacement on June 1 in Colin Jack. But he may only hold office for a short time if he is unseated by his primary challenger, Nina Barnes. She opted not to participate in the party’s selection, saying she wished to have voters decide. Any ballots cast for Rep. Seegmiller will not be counted, the Utah Lt. Governor’s Office said.

Another set of races that aren’t getting much attention but have a big impact will be for school board seats across the state, Perry said.

“These partisan school board races are incredibly important and they’re the ones people are just not watching,” he said. “We’ve seen over the past couple of years, they are making decisions that impact every family in the state of Utah and they’re the ones we typically don’t even know.”

To find out more about candidates who are seeking to represent districts you live in, click here.

The primary election is June 28. To participate in the Republican primary, you must be a registered member of the GOP (as it is a closed primary). The Democratic primary is open and registered party members will be mailed a ballot. However, unaffiliated voters who wish to participate in the Democratic Party must specifically request a ballot for it from their county clerk.