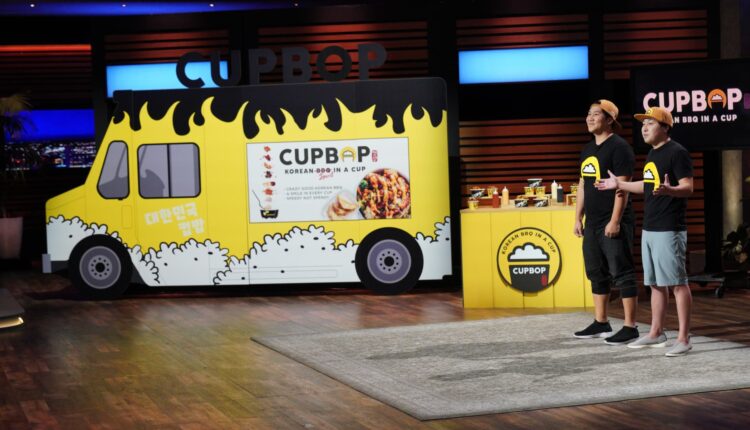 Their Provo, Utah-based Korean barbeque company, Cupbop, started out of a food truck in 2013. Today, it’s a restaurant operation with 36 locations across six US states — and more than 100 locations in Indonesia — that recently brought in $18.7 million in revenue over a 12-month span, the duo said on Monday’s episode of ABC’s “Shark Tank.”

Song, the company’s CEO, originally bought that first food truck and operated it with three other business partners. Kwon, a hedge fund investor who saw the truck becoming a community staple, joined the team in 2020 to help the company expand.

Cupbop’s business model is simple: It sells $8 to $10 bowls of Korean barbeque. The company still operates some food trucks, but the bright-yellow-and-black vehicles are more for marketing than income. The pandemic’s takeout craze elevated Cupbop’s sales — prior to 2020, the company made less than $10 million per year, Song and Kwon said.

The duo asked the Sharks for $1 million in investment funds, in exchange for 3% of the company. They noted that they only owned 50% of Cupbop, which meant the amount of equity they could offer was limited — but they wanted a Shark’s help to grow into a national brand.

“So many investors [have come] to us, I [said] no for eight years,” Song said. “I think we [grow to] 2,000 stores with you guys. I want to be the first Korean national brand with the Sharks.”

All five Sharks jumped at the opportunity. First, Kevin O’Leary said he’d take the 3% equity, and give Cupbop a $1 million loan with 10% interest over three years. Barbara Corcoran followed that offer with one of her own: $1 million for 30% of the company.

Then, Robert Herjavec upped the ante, offering $5 million for 28% of Cupbop. Herjavec said he felt particularly compelled by Kwon’s immigration story: Kwon’s parents sent him and his older brother to live with a family in Utah when they were children, so they could seek opportunity in America.

“Like you guys, my dad gave up everything to come here,” said Herjavec, who was born in Croatia and moved to Canada at age 8. “I had to frigging be successful to justify that sacrifice – and you guys are on to something here.”

Lori Greiner decided to join Corcoran, collectively offering a $1 million loan with 8% interest in exchange for 5% of Cupbop. And then, during a break in the action, Mark Cuban – the only remaining Shark – made a much simpler offer: $1 million for 7% of Cupbop.

“I love the business, I love the product,” Cuban said. “You’ve got the operations down, but you need someone to propel you in terms of marketing and PR and just to be able to have a national presence … I can provide that better than anybody.”

Mark Cuban (left) offered $1 million for 5% equity in Cupbop, telling Kwon (middle) and Song that he could make the company “a national presence.”

Can a Monthly Injection Be the Key to Curbing Addiction? These Experts Say Yes