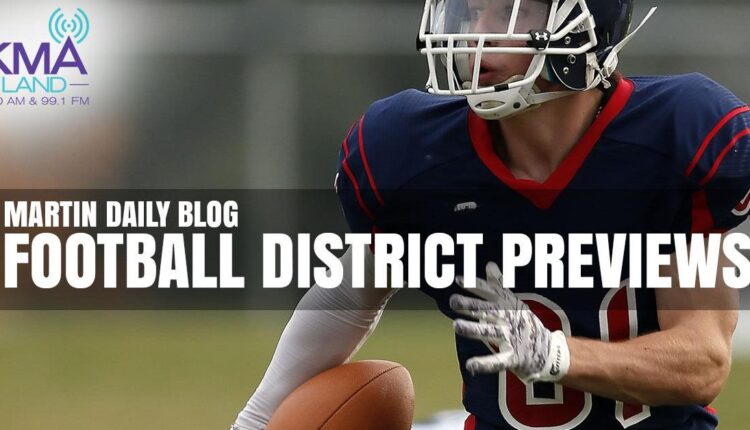 (KMAland) — The Martin Blog Fall Sports Preview continues today with a look at Class A District 6.

In Class A District 6, Lynnville-Sully rolled to the district championship with a perfect 6-0 mark while Belle Plaine was right behind them with one loss. And then things were a big chaotic mess. We love chaos over here. Here’s how the district looked:

Playoff teams in the district ended up going 1-3 in the opening round of the playoffs with Lynnville-Sully advancing to the next round before a loss.

Pretty good crop of coaches with plenty of postseason appearances, and that now includes Brock Hinkel, whose late father (Randy) went to 25 during his legendary career at Madrid.

Here are the returning quarterback in the district, sorted by passing yardage in 2021:

1. Conner Maston, SR, Lynnville-Sully: Check it out. The top five quarterbacks (by passing yards) are gone, and the top-returning thrower is the QB from the district champion last year. Maston had 338 yards and four touchdowns for the Hawks, but he only threw it 46 times, leading the district with 16.9 yards per completion.

2. Boudyn White, JR, Wayne: And the only other returning starting quarterback from last season is White, who had 135 yards passing and a touchdown during his sophomore season.

So, only two returning quarterbacks. Let’s see if we can guess on who will lead the other five teams.

•Belle Plaine: With Ben DeMeulenaere gone and graduated, senior Cejay Mumby might very well be the guy. He threw just two passes last year (for 24 yards), but he seems to be the next in line.

•Colfax-Mingo: Colfax-Mingo is the top throwing team in the district, so you know they are going to need someone to steer the ship. Junior Cael Bracewell threw the ball one time last year, but he was listed as a tight end. The two that were listed at QB that will be back this year are junior Joe Earles and sophomore Shane Hostetter. Could be one of those guys.

•Madrid: Brady Leonard has graduated, and it might be time for a young sophomore by the name of Preston Wicker to take over. He is the only other player on the Tigers roster that threw the ball more than once and is back this year.

•North Mahaska: North Mahaska has graduated Sam Terpstra, and there was only one other player that threw at least one pass last year. That was senior Nash Smith, but he was listed as a wide receiver. Three names to potentially know that were listed as a QB on Bound: senior P.J. Stout and sophomores Lucas Nunnikoven and Hunter Wernil.

•Ogden: Lane Snedden was the No. 2 passer in the district last year, and he has graduated. The two players other than Snedden that put the ball in the air are both listed as wide receivers. That’s senior Jack Christensen and junior Keaton Westberg. Those that did have the QB listing: juniors Colby Rohe and Carsen Moorman and sophomore Taylor Boothroyd.

Here are the returning leading rushers in the district, sorted by rushing yardage in 2021:

1. Corder Noun Harder, JR, Lynnville-Sully: Might be one of the best names I’ve come across. The top running back in the district is back after goign for 1,350 yards and 15 touchdowns while averaging 10 yards per carry.

2. Kyle Squires, SR, Lynnville-Sully: And the No. 2 returning back is also a member of the defending district champs. Squires had 808 yards and 13 touchdowns while also averaging 7.5 yards per carry.

3. Connor Timm, SR, Belle Plaine: Ranking No. 4 on the rushing list last season in the district, Timm pops up to No. 3 after rushing for 638 yards and nine touchdowns.

4. Ty Alcott, SO, Belle Plaine: A strong debut season for Alcott, who rushed for 547 yards and two touchdowns on just 97 carries as a freshman.

5. Boudyn White, JR, Wayne: The top-returning rusher for the Falcons is their QB. White had 425 yards and six touchdowns on the season.

6. Corydon Kiefer, JR, Wayne: You might recognize the last name when it comes to running the football. Kiefer had a solid season with 395 yards and a touchdown as a sophomore.

7. Brooks DeMeulenaere, SR, Belle Plaine: Speaking of familiar last names, how could you miss this one? Brooks had 364 yards and three touchdowns while averaging 8.5 yards per carry last year.

8. Paul DeJong, SR, North Mahaska: Not the St. Louis Cardinals shortstop. DeJong had a solid year with 342 yards and a touchdown on the ground in 2021.

9. Jeremy Reineke, JR, Belle Plaine: They can hit you from a lot of different angles it appears. Reineke had a solid year, too, with 328 yards and four touchdowns last fall.

Others with over 100 yards returning to the league:

Here are the returning leading receivers in the district, sorted by receiving yardage in 2021:

1. Curtis Horras, JR, Colfax-Mingo: As previously mentioned, Colfax-Mingo is going to throw the ball around a bit. And Horras led the district with 696 yards receiving last year. He also had a district-high six touchdowns on 33 grabs, averaging 21.1 yards per reception.

2. Jack Christensen, SR, Ogden: Christensen was second in the district last year with 614 yards receiving, but he led the league with 45 receptions. He scored three touchdowns.

3. Nash Smith, SR, North Mahaska: Smith also had a great year of receiving in ranking third in the district with 561 yards. He finished with 38 receptions and three touchdowns.

4. Dylan Perdue, SR, Ogden: Perdue pulled in 20 receptions for 323 yards and two touchdowns a year ago.

5. Cael Pearson, SR, Ogden: Whoever is throwing the ball around in Ogden this year, they will have some weapons. Pearson had 309 yards and three touchdowns on 29 grabs.

6. Trey Hockemeier, JR, Colfax-Mingo: Listed as a running back, Hockemeier had 25 receptions for 235 yards and two touchdowns.

7. Cael Bracewell, JR, Colfax-Mingo: The top-returning tight end in the district, Bracewell finished out his sophomore season with 32 re options for 230 yards and a touchdown.

8. Jacob Kockler, SR, Madrid: The top receiver for the Tigers, Kockler had 11 grabs for 187 yards and three touchdowns.

9. Hunter Meeks, SR, Ogden: Yet another Bulldogs standout returning as a top receiver, Meeks had 9 grabs for 170 yards and a touchdown.

Others returning with over 100 yards receiving:

Here are the returning leading defensive standouts in the district, sorted by total tackles in 2021:

1. Kyle Squires, SR, Lynnville-Sully: Best two-way player in the district? Squires led the district last season with 69.0 total tackles and had 5.5 tackles for loss along with two fumble recoveries.

2. Nathan Comer, JR, Ogden: Comer was second in the district last season with 64.5 tackles and ended up with 4.0 tackles for loss among those. He also had two fumble recoveries.

3. Lane Fisk, SR, Lynnville-Sully: Fisk was also a key defender for the Hawks, finishing out his junior year with 59.5 tackles, 6.5 tackles for loss and two interceptions.

4. Nash Ramirez, JR, Madrid: Another star linebacker coming back after a big season, Ramirez had 58.5 tackles and 2.0 tackles for loss.

7. Joe Earles, JR, Colfax-Mingo: The top tackling safety in the district, Earles had a big year with 47.0 tackles as a sophomore.

10. Conner Maston, SR, Lynnville-Sully: And the top 10 rounds out with another defensive back in Maston, who finished with 46.0 total tackles and 1.0 TFL. He also tied for the league lead with four interceptions.

11. Keaton Westberg, JR, Ogden: The top-returning tackling defensive end in the district, Westberg had a big year with 7.5 tackles for loss and 2.5 sacks among 42.0 total tackles. He also had two fumble recoveries.

12. Tristan Miller, SR, Madrid: From one DL to another, Miller had 40.0 tackles and 6.0 tackles for loss during his junior fall.

16. Trey Hockemeier, JR, Colfax-Mingo: Hockemeier was listed as a safety last season and ended up with 34.5 tackles.

17. Mathias Torres, SR, Lynnville-Sully: Torres had a strong season in opponent’s backfields with 6.5 tackles for loss and 1.5 sacks among 33.0 total tackles.

18. Ben Johannes, SR, North Mahaska: The top-returning tackler for the Warhawks, Johannes had 32.5 tackles with 3.0 tackles for loss.

Here’s a look at the other defensive players returning that had at least 2.0 TFL, 2 INT and/or 2 FR:

This is not my prediction. This is formulaic: 2021 district wins + # of returning standouts listed above + all-district returnees + preseason all-district. In Class A District 6 it looks like this:

Thoughts: Lynnville-Sully is the favorite, and there should be no doubt about that. No matter what The Formula says. However, I do think The Formula is on to something when it comes to Ogden. They seem to be well-experienced and talented with a lot returning from last year’s state playoff team. Speaking of playoffs, The Formula believes it will be the same four teams as last year, although maybe not in the same order. We’ll see soon enough.

Send any questions, comments and/or concerns to [email protected]

‘An Arm and a Leg’: Her Bill for a Prenatal Test Felt Like a ‘Bait-and-Switch’ Scheme