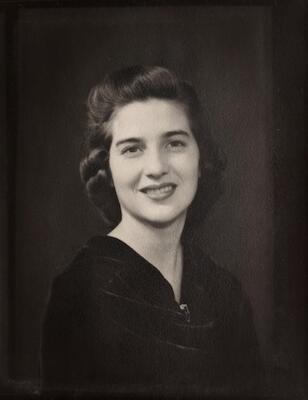 Everyone in Parowan, Utah has a nickname. Mary Jane Mitchell was no exception. ‘Mick’ was born October 25, 1921 to William Warner and Georgia Brown Mitchell. She was the third of four children. She attended schools in Parowan and after high school graduation attended BAC. She was active in athletics and music. Mick began studying piano at an early age with teachers in Parowan and Cedar City. Her teachers included Alfred Durham and Beth Leigh. She also studied in California and at the McCune School of Music in Salt Lake City, Utah. While at BAC she met H. Grant Seaman. They married on March 23, 1941 in Las Vegas, NV. They were sealed in the St. George Temple March 13, 1942. Mary Jane and Grant followed Grant’s Forest Service career to St. George, Beaver and Ogden, Utah as well as Elko, Nevada. In each of these locations Mary Jane created a lovely home for her husband and their six children. Her musical talent and her out-going personality enabled her to quickly become a contributor in each community. In her lifetime she shared her musical gift through playing in dance bands and for dance classes, accompanying numerous vocal and instrumental soloists and groups, playing for church meetings, and for countless funerals. She served in callings in each of the Church auxiliaries. Upon Grant’s retirement they returned to Cedar City. Together they were amazing supporters of the community and of the university. She was recognized for Meritorious Musical Service to Cedar City. Other honors included SUU Alumni Distinguished Service and the Carmen Rose Hepworth Alumni Award. Mary Jane was a volunteer at the Utah Shakespeare Festival for 22 years. She also served for a time on the Cedar City Beautification Committee. Her family heritage gave her the opportunity to be a member of the Daughters of the Utah Pioneers. Mary Jane was preceded in death by her parents; her brother Robert (Bob) Mitchell; sister, Louise Palmer; husband, H Grant Seaman; daughter, Sallie Anderson Gibson. She is survived by her sister, Katherine (Katie) Mitchell Halterman; children; Anette Wolford, Kathryn Gutherie, Grant Mitchell (Gaylene), John Warner (Mary), Marilyn Bennett (Rick). Mary Jane leaves a legacy of refinement, beauty, joy and service. Viewings will be held on Friday, September 23 from 6:00 – 8:00 PM and Saturday, September 24 from 9:30 – 10:30 AM at the chapel at 256 S. 900 W. in Cedar City. Funeral services are scheduled for Saturday, September 24 at 11:00 AM at the 256 S. 900 W. chapel.

Published in The Spectrum

Formula May Be Right for Infants, but Experts Warn That Toddlers Don’t Need It