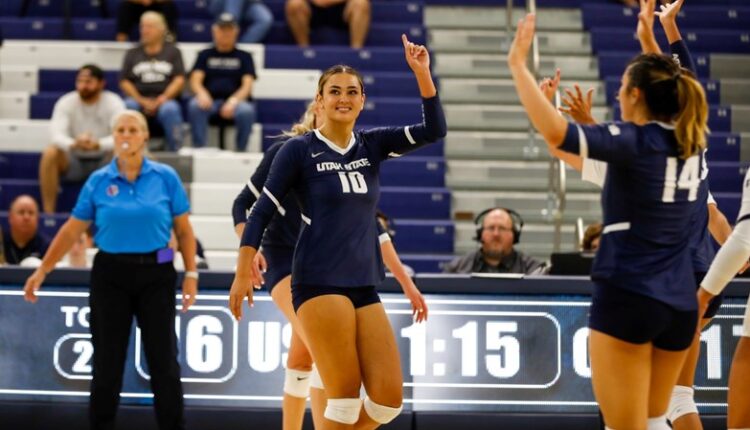 Both of this week’s matches will be streamed live and for free via BYUtv. Live stats will also be provided for both contests via StatBroadcast. Links to all options will be posted on the team’s social media pages and listed on the Utah State Athletics website.

Overall, Utah State hit .184 (57-30-147) on the match, while holding UCLA to a .076 (46-35-145) mark. Three Aggies finished with double-digit kills as a senior opposite side hitter Kylee Stokes had a match-high 14, junior outside hitter Tatum stable had 11 and senior middle blocker Kennedy Boyd had 10 boyd led USU with a career-high tying eight blocks, including a career-best three solo.

AGGIES IN THE POLL

Utah State received votes in the latest American Volleyball Coaches Association (AVCA) Coaches Poll announced on Monday, Aug. 29. The Aggies gleaned 20 votes to rank 33rd in the nation. Utah State, the only program in the Mountain West to receive votes, opened its 2022 season 2-0 as USU defeated then-No. 12 UCLA 3-1 and Cal Poly 3-1 at the Utah State Invitational. The victory over the Bruins marked the Aggies’ first win over a ranked opponent since Utah State’s 3-0 victory over No. 3 Hawai’i to win the WAC Tournament Championship on Nov. 24, 2010.

Utah State volleyball had two student-athletes earn Mountain West weekly awards after their respective performances in the 3-1 defeat of both then-No. 12 UCLA and Cal Poly. Senior opposite side hitter Kylee Stokes was named the Offensive Player of the Week, as well as the America First Credit Union USU Student-Athlete of the Week, after leading the Aggies offensively with 29 combined kills, averaging 3.63 per set, including the match-clinching kill against the Bruins. setter Leah Wilton-LaBoy also earned weekly honors as she was named the MW Freshman of the week after leading the Aggies with a combined 48 assists, averaging 6.00 per set, and was third on the team with 20 digs, averaging 2.50 per set. She averaged a double-double of 24.0 assists and 10.0 digs per match.

THIS IS OUR HOUSE

Utah State volleyball has won 12-straight matches at home and is 16-1 in the 17 matches played at Logan.

PUTTING INTO THE WORK

A SEASON FOR THE HISTORY BOOKS

MOUNTAIN WEST COACH OF THE YEAR

Head coach Rob Neilson was named the 2021 Mountain West Coach of the Year after leading the Aggies to a share of the MW regular season title and the team’s most wins in over a decade.

CAN YOU DIG IT?

WEDDING BELLS WILL BE RINGING

ALL IN THE FAMILY

Freshman setter Leah Wilton-LaBoy is the granddaughter of USU volunteer assistant coach Mike Wilton. Her mother, Melissaplayed volleyball for the Aggies in 2001, while her uncle, travis, was a member of the USU football team. However, Wilton-LaBoy isn’t the only Aggie with family connections to USU. Junior outside hitter Tatum Stall’s brother, clayplayed on the men’s basketball team from 2017-20, redshirt freshman outside hitter Kaylie Ray’s father, Brennanwas on the men’s basketball roster from 1999-2002, graduate opposite side hitter Emilee Turner’s father, Greyplayed men’s basketball for the Aggies in 1986-87 and freshman outside hitter Audrah Radford’s mother, ginaplayed volleyball from 1994-96.

Utah State returns eight letterwinners, including three starters and libero Abby Peterson. Junior outside hitter Tatum stable, who earned all-MW honors in 2021, led the team in total kills (360) and kills per set (2.90), while finishing second on the squad in digs (250) and service aces (36). Senior opposite side hitter Kylee Stokeswho was named to the Mountain West All-Tournament Team, finished second on the 2021 team with 268 kills and 92 blocks.

Peterson returns for her third season with the Aggies after leading the squad with 392 digs as a sophomore, finishing 2021 ranked sixth in the conference with 3.32 digs per set. Senior middle blocker Kennedy Boyd appeared and started in 20 matches in 2021 before missing the remainder of the season due to injury, finishing with 168 kills and 76.0 total blocks. Sophomore setter Beatrice Rodrigues led USU and ranked 10th in the MW with 5.41 assists per set in 2021, totaling 509 assists on the year.

WELCOME TO THE SQUAD

Help us fight to keep our boy SAFE!