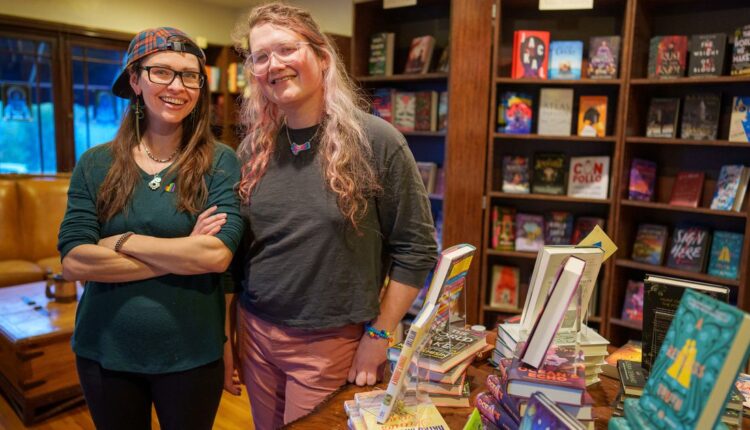 Meet the Utah bookstore catering to fantasy and sci-fi nerds

The setting for The Legendarium, Salt Lake City’s newest independent bookstore, resembles something out of the books in which the store specializes.

The house in which the shop is located, at 349 E. 900 South in Salt Lake City, was built in 1910. The atmosphere surrounding the packed bookshelves — a dream come true for fandom nerds everywhere — mirrors that of a tavern: Creaky wood floors , warm yellow lighting and an abundance of fantasy memorabilia.

Sisters Stephanie and Raelle Blatter opened the store in August, selling only science fiction and fantasy books. Their goal, they said, is to highlight the authors in those genres who bring underrepresented voices — BIPOC and queer authors and characters — front and center.

“My sister and I really wanted to create a safe space for people to come,” Stephanie said, adding that there’s a certain strength that comes from specializing as a bookseller.

“It’s such an exciting genre to be in, because they’re publishing authors that are traditionally underrepresented, and kids need that,” Stephanie said. “If you can’t see it and read about it in stories that you are exposed to, then you feel alone.”

That’s how Stephanie said she felt growing up, not seeing queer representation in literature — for example, she said, it’s particularly hard to find well-written sapphic stories. (Both Blatter sisters are queer, and Raelle is a transgender woman.)

“Growing up, science fiction and fantasy were incredibly important to [us], because they allow for new world building and imagination to just go wild,” Stephanie said. “You can address topics that are important to you internally like mental health or neurodivergence or not fitting in a certain box.”

Standing up against book bans

In literature, particularly in science-fiction and fantasy, one can imagine a world where such topics aren’t divisive issues, she said. In this world, though, they are — and The Legendarium aims to speak to that, too.

Among the books available at the store are titles recently pulled from the library shelves in the Alpine School District, the state’s largest, after complaints from members of a conservative parents’ group. Those titles include Sarah J. Maas’ “A Court of Thorns and Roses” books, which have been criticized for their sexual content.

Stephanie said she and her sister aren’t worried about The Legendarium being a target for book bannings and challenges that are spreading like wildfire across the country. Instead, she said, they’re leaning into it.

“We’re kicking off a banned books book club to highlight and give homage to books that are banned,” she says. “Most [banned books] are banned because they address social justice issues. … They are queer books, books that deal with racism and the disabled community.”

Stephanie said she doesn’t want to categorize people, but these are all books that “large conservative groups are uncomfortable with because they challenge their view of the world.” (It’s an opinion that a group of Utah children’s book authors also shared in an open letter circulated in September.)

Stocking such books, she said, is key to The Legendarium’s mission, because those books “challenge white, heteronormative, patriarchal society.”

“We can’t put them in schools or libraries necessarily, but we can highlight them here and provide a space where people can come read and experience those here,” Stephanie said.

Providing customers with a holistic experience covers not just the books they sell, but the ones they don’t.

The most notable choice the Blatters have made is not to stock anything related to the Wizarding World or its creator, Scottish author JK Rowling. (The only exception is a “Harry Potter”-themed board game in the store’s cafe, in a stack with other games available to customers.)

It’s a very personal and conscious decision that the Blatter sisters have made, Stephanie said, with a franchise that the sisters grew up reading and loving. But, she added, Rowling “puts millions of dollars into anti-trans legislation in the United Kingdom. … Purchasing ‘Harry Potter’ novels would financially support this author and [her] transphobic statements.”

Acknowledging that some may find it hypocritical for The Legendarium to champion banned books while passing over the “Harry Potter” universe, Stephanie defended the decision. “I feel very strongly that books are crucial for young people’s mental health,” she said.

Stephanie said she has nothing against the “Harry Potter” book franchise itself. “People can find it on Amazon and Barnes and Noble,” she said. “If they want something more niche and open-minded, they can find that here.”

Being careful about curation goes beyond Rowling’s work. The store tends to stay away, Stephanie said, from authors from the 1980s and ’90s who had gender issues with their books — and instead choose highlight authors like Ursula K. LeGuin, the author behind the “Earthsea” fantasy series and other famous titles , “who work challenges gender.”

“Not everything we’ve brought in may be perfect, but I have made a conscious decision to exclude certain well-loved fantasy or science fiction pieces that don’t fit with what we want to represent, with what The Legendarium stands for,” Stephanie said.

Space for coffee, games and writing

The name of the shop comes from JRR Tolkien’s journal of writings, where he would do worldbuilding. “He would tell stories to his children at night, and then he started to write it down because his kids would challenge him like, ‘Oh, you didn’t say that last week,’ … and so he’s like, ‘OK, let me start writing this down,’” Stephanie said.

To bolster that spirit of fostering creativity and an inclusive space for children, The Legendarium has partnered with the League of Utah Writers, and lets youth come into the store after school to hang out.

The sign outside The Legendarium shows a stack of books, run through with a sword. The store’s tagline is also prominent: “Purveyors of books, legends and local roasts” and the shop’s official logo is a steampunk dragon, named Gizmo, which was designed by Disney artist and childhood friend Liz Richards.

The walls are fit with posters from various fantasy and sci-fi series, and various merchandise from an Etsy seller. The windows throughout the old building, giving way to Salt Lake City’s gray autumn light, includes some fit with stained-glass vinyl stickers of such beloved characters as Mr. Spock, Jean-Luc Picard, Grogu (aka Baby Yoda) and Princess Leia, among others.

The store’s mini coffee bar — complete with “Lord of the Rings” coasters and handheld old-timey lamps — features such themed drinks as “Gondor Fog,” “Barefoot in the Shire” and “Priory of the Orange Mocha.” The cafe partners with such small Utah businesses as Blue Copper Coffee, Tea Grotto, Lone Pine Bakery and the Baking Hive.

The store also is used for role-playing games, with a “gaming dungeon” area in the basement along with tables for customers to play such games like Dungeons and Dragons. RPGs, she said, “pair well with literature because it’s all about storytelling, world-building and character development.”

Stephanie — wearing a pair of earrings she made herself, featuring dragons and a samurai sword — said starting the bookstore has been a dream of her and all of her siblings’ for a long time.

Part of the inspiration, Stephanie said, is San Diego’s iconic Mysterious Galaxy Bookstore, which she said is like a “mecca for fans and authors.” That store’s inclusive environment spurred them to recreate something similar in Utah.

“I was kind of like, ‘You know what, if I don’t do this now, I’m never going to do this,” Stephanie said.

Stephanie Blatter said she is counting on others sharing her family’s interest in science-fiction and fantasy to make The Legendarium a success — and the response during the store’s first three months have proven them right. There is, she said, a “large nerd community really into the imaginative in Utah.”