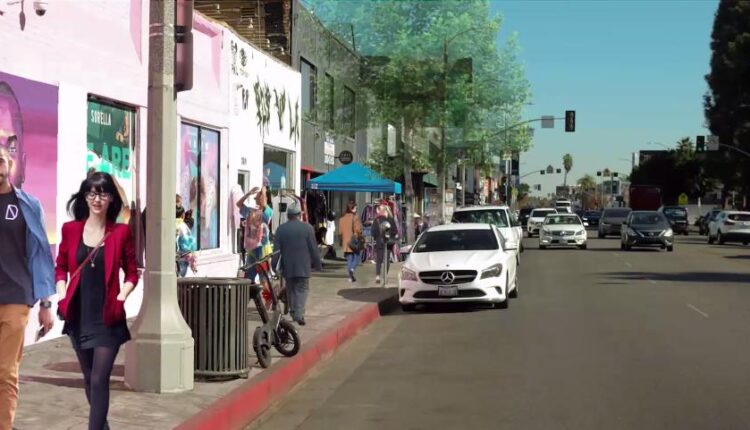 Rendering of the block of Melrose Ave., between Ogden Dr. and Orange Grove Ave., after the sidewalk widening that will be done as part of the Melrose Pedestrian Improvement Project.

The Melrose Pedestrian Improvement Project, which will add street trees, ADA-compliant curb ramps, bus stop improvements, and new lighting and sidewalks near bus stops to the portion of Melrose Ave. between Highland and Fairfax Avenues, is finally moving into its construction phase.

According to Cortes, the project began in 2014, when Metro put out a call for grant applications relating to transit-area improvements. The city applied for funding for bus stop improvements along this particular section of Melrose, and in early 2016 was awarded a grant for $3.9 million for some very specific items to improve the streetscape, pedestrian safety, mobility, and accessibility near transit stops. More specifically, the funding covers:

Providing additional details on the sidewalk widening between Ogden and Orange Grove, where the current narrow sidewalks restrict pedestrian mobility, especially for people in wheelchairs, Cortes explained that the space for the additional sidewalk width would come from narrowing the street median in this area, and removing the left turn pockets onto Orange grove No street parking spaces will be lost, he said, and an added benefit will be that the left turn approach lane at Fairfax Ave. will be lengthened so cars waiting to turn don’t back up so much into the other traffic lanes.

Drawing showing plans for the block of Melrose between Ogden and Orange Grove, where sidewalks will be widened from 7 to 12 feet, to allow safer pedestrian access and mobility.

Also, Cortes noted that specific locations for the new street trees have not been chosen yet, and StreetsLA is working with local business owners to determine the best placements. The goal is to choose locations that business owners support, which won’t block signage or traffic, to make sure that all the trees are wanted and no one damages or removes a tree after it’s planted. Trees under consideration for planting – including Paperbark, Blue Oak, and Desert Willow – are all drought tolerant, Cortes said. One is an evergreen species, and two are deciduous. They will be mixed throughout the corridor, to help protect against diseases, and City Council District 5 and the Melrose Business Improvement District will share responsibility for tree watering and maintenance.

Meanwhile, the new individual seating cubes will be distributed along the project corridor, and clustered in some areas to create spaces where friends can sit in groups to rest and chat. Cortes said individual seats were chosen over multi-person benches to discourage longer stays and people sleeping on the new street furniture.

the new Bus stop lightsapproved by the Bureau of Street Lighting, will be 14-foot steel poles with spider luminaires.

In general, although the specifics have evolved a bit, the project details are pretty much the same as when StreetsLA last provided an update on the project in July, 2021. The one big difference is that a year ago, the project also included new signage for the project corridor, including a gateway sign at Melrose and Highland, and wayfinding signage at various places along the full corridor. When the agency presented draft designs for those signs last year, however, there were complaints from both stakeholders and the Melrose BID. Many stakeholders said the designs looked dated and didn’t capture the historically artsy spirit of the avenue, and members of the BID complained that the designs completely ignored a major signage and branding effort that group had undertaken at great time and expense.

This time around, the StreetsLA presentation contained no mention of signage at all, and when asked about it after the main presentation on Monday, Bleich said the BID will now be installing a gateway sign, and that it was determined that no wayfinding signs are needed along what is just a 12-block stretch of a single, straight street.

Finally, Bleich and Cortes noted that while there have been many questions about other possible improvements to this part of Melrose Ave. (such as bike lanes, additional parking, new trash cans, and more), they were not part of the scope of this grant, which was fairly small and very narrowly focused on safety and accessibility at transit stops. Bleich said, however, that there will most certainly be other kinds of grant and improvement opportunities in the future which could cover different elements of the street.

Construction of the items included in this project is beginning this month, at the western end of the project area near Fairfax High School (to take advantage of the school’s summer break). Construction hours will generally be 9 am to 3 pm daily, and there will be some temporary lane closures associated with the work, especially in the area where the sidewalks will be widened between Ogden and Orange Grove. According to Bleich and Cortes, construction will proceed eastward from its starting point, over the next year, and is scheduled to be completed in June, 2023.