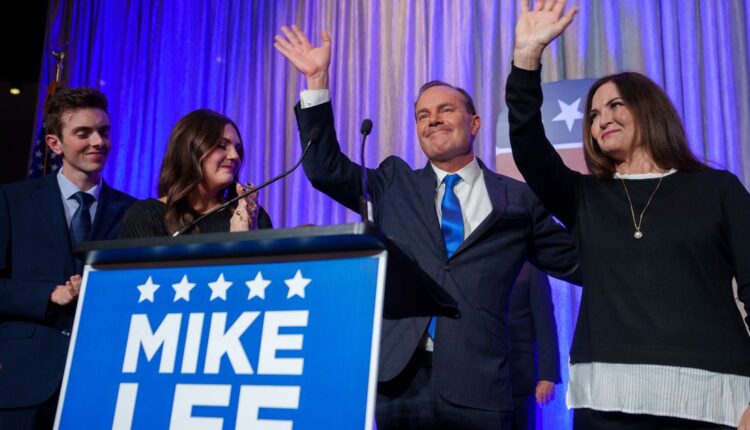 Mike Lee wins the reader poll for Utahn of the Year

(Trent Nelson | The Salt Lake Tribune) Sen. Mike Lee makes his victory speech at the Utah Republican Party election night party at the Hyatt Regency in Salt Lake City on Tuesday, Nov. 8, 2022. Lee was also the top vote-getter in the Tribune reader poll for Utahn of the Year.

Sen. Mike Lee, fresh from winning a third term in the US Senate, also was the top vote-getter in The Salt Lake Tribune’s Utahn of the Year reader poll.

This year’s poll drew 18,807 votes over a week, and Lee led the way with 5,553 (30.3%). Lee overcame an early-year blowback from his effort to find a way to keep Donald Trump in power to convincingly win the GOP primary over two challengers and the November general election over independent challenger Evan McMullin.

Jerilyn Poole, a Provo advocate for the LGBTQ community, was second with 4,682 votes, and Olympic Gold Medal-winning figure skater Nathan Chen was third with 3,238 votes.

Those three collectively had 73.4% of the total vote among 24 candidates.

There were also 559 write-in responses, and the most common choice among write-ins was the whale public art installation at the roundabout near Salt Lake City’s Ninth and Ninth neighborhood. Second among the write-in choices was Becky Edwards, the former state legislator who ran for the US Senate and lost to Lee in the Republican primary.

Here are the past Utahns of the Year, selected by The Tribune since 1997:

2016 • Madi Barney, who brought attention to how Brigham Young University was handling reports of sexual assaults.

2007 • First responders to tragedies, including the Trolley Square shooting rampage and the Crandall Canyon Mine disaster.

2005 • Pamela Atkinson, advocate for the poor and homeless.

2004 • Utahns killed in Iraq and Afghanistan.

1999 • The letter that sparked the Olympic bribery scandal.