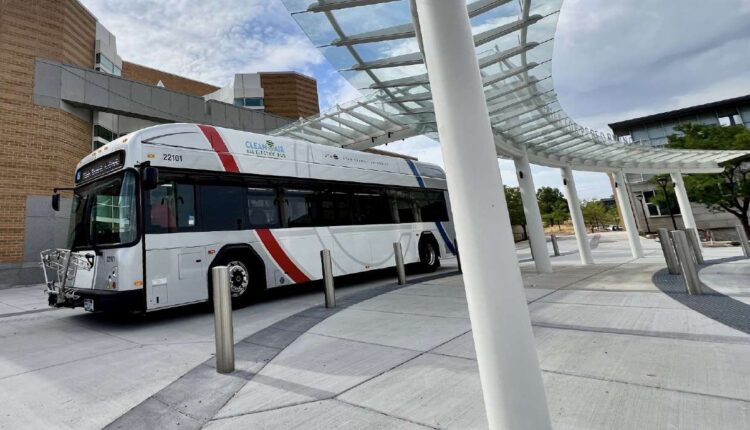 One of six new electric buses that will be a part of the new Wildcat Shuttle this year. The service is a three-stop portion of the Ogden Express, which is expected to be completed next year. (Utah Transit Authority)

OGDEN — The first segment of a new rapid transit system is ready to roll.

Weber State University students and staff participated in a ribbon-cutting ceremony Thursday to celebrate the launch of the new Wildcat Shuttle, an on-campus segment of the Ogden Express that’s currently under construction in other parts of the city. The service itself begins on Monday, offering bus service every 10 minutes at three stations from 6:30 am to 8:30 pm through six all-electric buses.

The Wildcat Village, University Village and WSU Davis stations are located at different parts of the campus. The bus service is free for students and staff, and Weber State University will offer free parking at the Dee Events Center to encourage people to ride the shuttle to campus.

“The opening of (Ogden Express) is a milestone to making our campus so much more accessible to our students, faculty, staff and community. I’m excited to see the change and growth this brings to Weber State,” said Weber State University President Brad Mortensen.

The launch of the Wildcat Shuttle signals the halfway point of the Ogden Express construction, according to the Utah Transit Authority. There are 10 other stops that will be included along the 5.7-mile route from the Ogden FrontRunner Station to McKay-Dee Hospital with several city stops in between. Eleven electric buses will travel to and from all 13 stops once the project is complete.

The service is a sister project to the Utah Valley Express that runs between Orem and Provo, and the forthcoming Midvalley Connector in Salt Lake County.

Beth Holbrook, a UTA trustee, pointed out that the stations were selected based on current and future needs in Ogden. Construction began in 2020, months after the bus rapid transit project received a massive grant from the federal government. Nearly $80 million in federal funds helped the $120 million project come together, according to the Federal Transit Administration.

Once complete, the first three years of the service will be free as a result of the federal grant. The entire project is expected to be complete by the fall of 2023, according to James Larson, a spokesman for the agency.