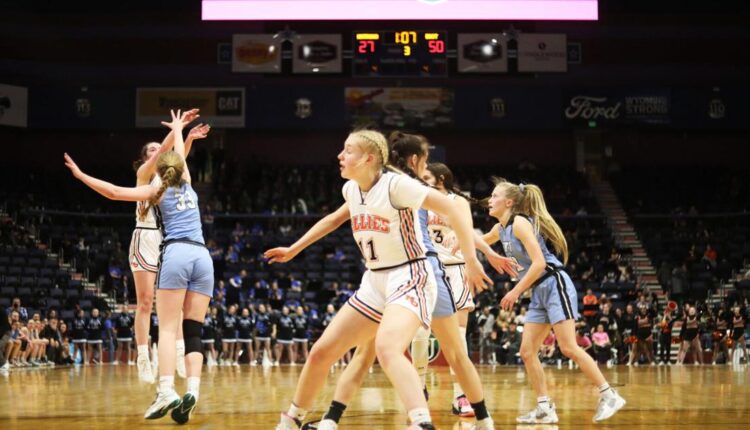 The Natrona County and Kelly Walsh basketball teams all head to Cheyenne this weekend for the James Johnson Winter Classic. Following this weekend, NC and KW will face Class 4A schools next week before beginning conference play the following week.

After opening the season 3-0 at the Oil City Tip-Off Classic in Casper, the Fillies traveled to Las Vegas to compete in the Tarkanian Classic. NC earned victories over Castle Rock, Colorado, and Desert Hills, Utah, and dropped tough contests to West Jordan, Utah, and Jordan, Utah, in the four-day event prior to Christmas.

Senior Megan Hagar leads the team with 19.7 points, 3.4 assists and 4.0 steals per game to go along with 5.3 rebounds per game. Junior Lexie Ransom is pitching at 10.0 ppg, while sophomore Brynn Sybrant averages a team-best 6.1 rebounds as well as 8.4 points and 2.6 steals. Senior Emily Manville (5.3) and junior Elise Swan (6.0) are averaging a combined 11.3 points per game.

The Fillies have one of the tougher schedules at the tournament as they face two-time Class 4A defending state champ Cheyenne East (6-0) and four-time 3A state titlist Douglas (6-0) in addition to Rock Springs (2- 4) and undefeated Cheyenne Central (6-0).

The Mustangs also went 3-0 at the Tip-Off Classic and doubled up Lyman 50-25 to open play at the Flaming Gorge Classic before losing to Star Valley and Jackson.

Former Kelly Walsh standout Kayla Gilliam has had a rough start to her Trojans coaching career. KW went 0-3 at the Tip-Off Classic, including a 61-32 defeat to Natrona County.

The Trojans defeated Cheyenne South 45-42 at the Flaming Gorge Classic before losing to undefeated Pinedale and Thunder Basin (7-3).

Senior Peyton Carruth missed the first few games, but is averaging a team-leading 13.3 points since her return, and fellow senior CJ Eskew is averaging 10.3 points and leads the team with 6.7 rebounds per game.

With basically a new team after losing a number of seniors from the team that finished third at state last year, the Trojans have won two in a row after starting the season 0-4.

Get in the game with our Prep Sports Newsletter

Sent weekly directly to your inbox!