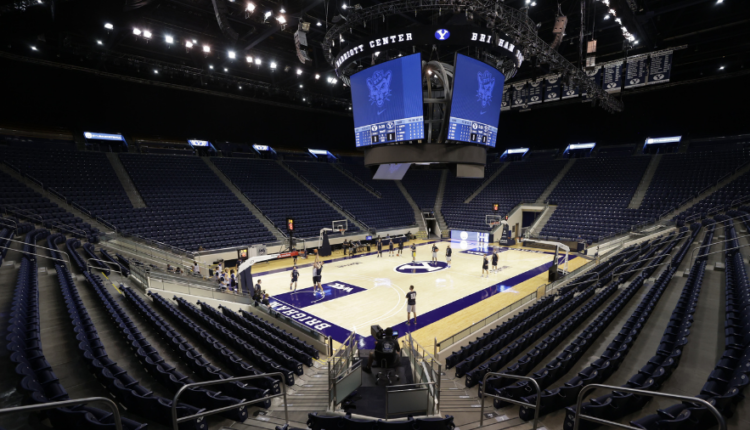 PROVO, Utah – The BYU basketball team was back at the Marriott Center for summer training on Friday.

It was the first time the team had been to the Marriott Center in months. The reason for the long delay was the establishment of a new court.

While the Marriott Center and Annex got new courts, Mark Pope’s program worked out at the old Provo High gym, now owned and part of the campus of Brigham Young University.

The new court in the Marriott Center has a similar design to the previous one, but with slight changes.

It’s a lighter wood tone and the baseline has the updated Brigham Young font. In addition, the shade of blue is a bit lighter and closer to royal blue than the previous court design.

Here you can see last year’s court and the new design side by side. Some subtle upgrades. pic.twitter.com/gCNqpnWbHx

This is the eighth different space design in the Marriott Center since the building opened in 1971. In addition, this season marks the 50th anniversary of the opening of the historic venue.

Another change from last year’s design is a three-point line. The women’s college basketball moved 22 feet, 1 3/4 inches back the same distance as the men’s.

Two years ago, the BYU Store added murals to the ceiling showing the history of the old BYU basketball courts in the Marriott Center. Now they have one more to add to the story.

As cases with the Delta variant increase, this is how healthcare workers, hospitals and researchers are responding to the COVID-19 pandemic

2 teenagers after crash in West Ogden. taken to the hospital, one in critical condition