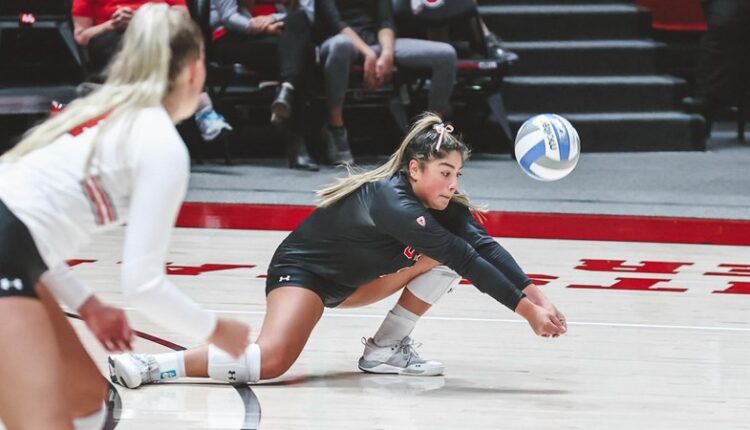 The number 10 in Utah volleyball is scheduled for their final non-conference game of the season against the number 15 of the BYU Cougars at Smith Fieldhouse in Provo, Utah, this Thursday, September 16. The first serve for the Utes and Cougars will be at 7pm MT and the game will air on BYUtv. Jarom Jordan will serve as the play-by-play announcer while Amy Gant will be on the air as the analyst.

• Utah has moved up to 10th place in the current AVCA Coaches Poll rankings and is the second highest Pac-12 team.
• Utah’s excitement over the number 3 Nebraska on the road marks the first win over such a high-profile opponent since the Utes defeated number 2 Washington in 2014 in Salt Lake City. The win is the program’s highest road win ever. Utah’s highest wins in the program’s history are at home above No. 1 Stanford (2000) and No. 2 Washington (2014) and now at No. 3 in Nebraska (2021). The win marked the 13th win over a top 10 team in program history.
• Dani Drews is her 55th match in a row with 10 or more kills and the 96th of her career.
• Vanessa Ramirez has had double-digit results in every game of the season, leading the Utes in six of their eight games.

WEEKLY PROFITS
Dani Drews was named Pac-12 Offensive Player of the Week on Monday afternoon for his performance against Weber State and then No. 3 in Nebraska, leading to her Sports Import / AVCA Player of the Week election. After Adora Anae (2017) and Brenda Barton-Whicker (1997), Drews is only the third player to be named Utah National Player of the Week. Drews’ pick comes after leading Utah with a season high of 27 kills, 16 digs at Lincoln, and helping the Utes in a five-set thriller in which Utah fell from 0-2 to win the match against the Huskers kick off. A native of Sandy, Utah, also started the weekend on a high note, scoring a staggering 6.0 kills per set against Weber State with zero hit points and a hit percentage of 0.486 in the sweep over the Wildcats. She also hit a season high of 20 digs in just three sets of games.

BYU goes into the rivalry game 8-1 in the season, with No. 4 Pittsburgh’s only loss coming in four straight sets. The Cougs have collected seven sweeps while the other win was a five-set win over Weber State. Heather Gneiting ranks second in the nation with a hit rate of 0.522, while BYU ranks fifth nationwide as a unit with a hit rate of 0.316. BYU is also 10th in aces per set (2/17), 15th in the opponent’s hit rate (0.126) and 24th in kills per set (13.93). Utah and BYU last met in the second round of the NCAA tournament in 2019, when Utah swept BYU at Smith Fieldhouse to punch a ticket for the Sweet 16.

Utah has had a streak of three games in five days, with wins over Weber state and then No. 3 Nebraska and their first loss of the season to Boise State. The Utes started the week hotly beating their underdogs Dani Drews and Madelyn Robinson, who together scored 37 kills and only five errors in the sweep. Robinson hit a career high of 19 kills to lead the way, while Drews linked her career high of 20 digs in just three sets.

The Utes then went on to record the program’s biggest road win in history, beating No. 3 Nebraska in Lincoln. Utah started the game 0-2 down but rallied for the next three sets to fend off the Huskers. Drews led the roster with 27 kills, Zoe Weatherington got a career high with 17 kills, and Vanessa Ramirez got a career high with 21 digs. Megan Yett also had a career day behind the line, hitting a total of five service aces at the career high.

Failing to maintain momentum, Utah dropped its first game of the season in Boise state to end the road trip. The Utes struggled offensively to find the rhythm and the Broncos took the chance and won in four sets.

Utah ranks third in the Pac-12 and No. 12 in the nation with 2.93 blocks per set. Utah is led by its mid-blockers Kennedi Evans and Allie Olsen, who take third and fourth place in the Pac-12 in blocks per set, respectively. Evans collected a total of 39 blocks and Olsen has 33 blocks a year. For the Utes, the right side Zoe Weatherington also appears, who has reached a total of 28 blocks. Utah has posted 10 or more blocks in six out of eight games this season and only made four double-digit blocking efforts this spring season. Utah has won every game it led in blocks.

RECORD CLOCK
Dani Drews, the three-time All-American, has set numerous programming records during her Ute career and could stand a chance of becoming Utah’s all-time kill leader. Drews has a total of 1,837 kills and ranks second in career behind former Utah teammate Adora Anae. Anae holds the program record with 1,920 kills.

Drews holds the single-season program record for kills (643, 2019) and the single-match record for kills in the rally scoring era in three sets (22, 2018), four sets (30, 2x), and five sets (33.). , 2019). Drews also became the program’s first Pac-12 Player of the Year, the only two-time AVCA Player of the Year in the program’s South Pacific region, and the only player to receive two AVCA First Team All-American awards.

Utah opens the conference play against the number 7 Washington Huskies in Seattle next Wednesday, September 22nd. The Utes and Huskies play at 9 p.m. MT at the Alaska Airlines Arena on ESPNU. Utah will then turn around and travel to Colorado for a game on Friday, September 24th at 7 p.m. MT in Boulder, Colo.

Here’s how to prepare for a guided river cruise