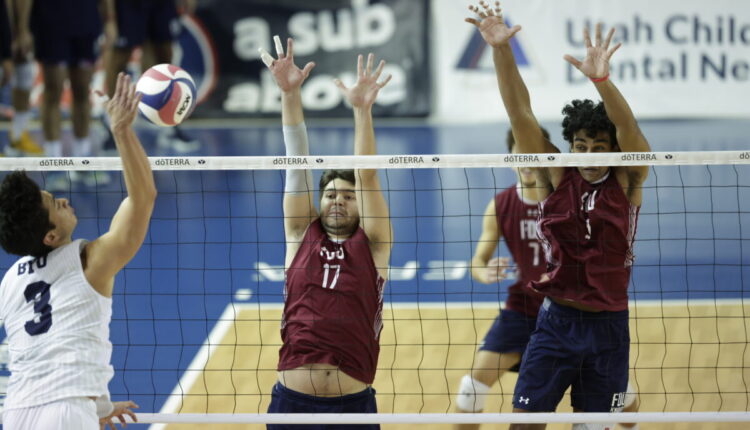 Artem Vetrov (left) and Rui Fernandez of Fairleigh Dickinson attempt to block an attack by BYU’s Kupono Brown during a men’s college volleyball match at the Smith Fieldhouse on Friday, January 20, 2023.

BYU and Fairleigh Dickinson met in a men’s college volleyball match at the Smith Fieldhouse on Friday, January 20, 2023.

BYU’s Luke Benson points at a teammate to celebrate a point during a men’s college volleyball match against Fairleigh Dickinson on Friday, January 20, 2023.

Artem Vetrov (left) and Rui Fernandez of Fairleigh Dickinson attempt to block an attack by BYU’s Kupono Brown during a men’s college volleyball match at the Smith Fieldhouse on Friday, January 20, 2023.

BYU and Fairleigh Dickinson met in a men’s college volleyball match at the Smith Fieldhouse on Friday, January 20, 2023.

BYU’s Luke Benson points at a teammate to celebrate a point during a men’s college volleyball match against Fairleigh Dickinson on Friday, January 20, 2023.

Before the start of Friday’s volleyball match at the Smith Fieldhouse, the public address announcer opened his microphone and introduced the visitors as the “Fairleigh Dickinson … (checks notes) … Knights.”

You can hardly blame him for the pause.

Fairleigh Dickinson is only in its second season as a Division I men’s volleyball program as the sport continues to grow slowly throughout the country. While there are more than 300 women’s college Division I programs, there are just 23 teams in the men’s sport.

Fairleigh Dickinson is a private university, with its main campuses in New Jersey. The Knights will compete in the Northeast Conference with Saint Francis U, St. Francis Brooklyn, Long Island University, Daemen, Sacred Heart, Merrimack and D’Youville.

FDU was picked to finish sixth in its first year in the conference.

“What I liked first and foremost is that if we can be any part of trying to grow the game and give more opportunities for young men, let’s bring a team in,” BYU coach Shawn Olmstead said. “It was awesome in here on a Friday night and that’s exactly what we wanted. They’re a new program and I just complimented their coach. They hung in there.”

As sure as the BYU student section knows all the words to the song “Mr. Brightside,” though, the Knights were in for a long night in the Fieldhouse.

BYU rested sophomore outside hitter Miks Ramanis and started Trent Moser. The talented freshman played well, finishing with nine kills, five digs and four blocks. He seemed unfazed in his first college start. Not surprising, since he played for the USA U21 team in Cuba this summer.

“I had some nerves tonight,” Moser said. “This a great environment but it’s nothing like the thousands of screaming Cubans I was playing in front of this summer. It felt great. I love playing out there with my brothers. I couldn’t have done anything without them.”

Luke Benson paced the Cougars with 12 kills and hit .474. Kupono Browne also had nine kills to go along with three aces. Heath Hughes led the Cougars to a .294 hitting percentage with 27 assists. Teon Taylor had a good night at the net with 10 block assists.

Artem Vetrov topped Fairleigh Dickinson (3-4) with six kills and Rui Fernandez, who came into the match as the nation’s leading blocker, had four block assists. The Knights hit just .014.

Browne fired off two ace serves and Moser added another as BYU got off to a quick 8-3 lead in Set 1. Moser came out of the back row for a kill and a 12-7 Cougar advantage, followed by a solo block from Taylor to make it 13-7. BYU continued to lead the set and a slick Moser roll shot pushed the Cougars to 20-15. Fairleigh Dickinson fought off set point three times, but a service error by the Knights finished the set at 25-20.

Moser and Benson had four kills each for BYU, which hit .320 in the first set.

Fairleigh Dickinson kept pace with BYU in Set 2 through the midway point but the Cougars found a way to pull away. Benson threw down a back row kill, Browne and Taylor teamed up for a block and Browne smashed a kill for a 13-10 lead. Browne and Benson scored on attacks to close the set at 25-17. BYU hit .429 and Benson had six kills in the second set.

The Cougars got some distance in Set 3 with back-to-back blocks for a 13-11 lead. A Browne kill and an FDU error pushed that advantage to 18-14. Browne fired off an ace and another Knights error gave BYU a 20-14 lead.

Hughes, Ethan Gant and Moser teamed up for a triple block and then Moser tooled his attack off the block for a 23-15 Cougar advantage. At match point, an FDU attack went into the net and BYU (3-0) won 25-15 for the sweep.

The same two teams will meet again the Smith Fieldhouse on Saturday at 7 pm MT.