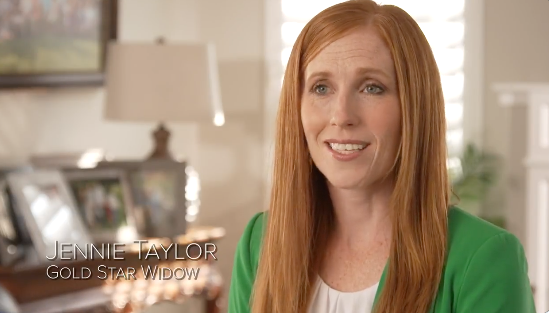 Jennie Taylor, the North Ogden advocate for the military and military families, is endorsing US Sen. Mike Lee in his reelection bid against independent Evan McMullin. She’s seen in a screen grab from an endorsement ad, publicly released Sept. 11, 2022.

Evan McMullin poses for a photograph, April 28, 2022, in Salt Lake City. McMullin, a newly empowered independent who’s been backed by the Democrats, is running against Sen. Mike Lee, who is up for reelection.

Jennie Taylor, the North Ogden advocate for the military and military families, is endorsing US Sen. Mike Lee in his reelection bid against independent Evan McMullin. She’s seen in a screen grab from an endorsement ad, publicly released Sept. 11, 2022.

Evan McMullin poses for a photograph, April 28, 2022, in Salt Lake City. McMullin, a newly empowered independent who’s been backed by the Democrats, is running against Sen. Mike Lee, who is up for reelection.

NORTH OGDEN — Jennie Taylor, the North Ogden woman who’s taken a vocal role in advocating for the US military and military families, is wading into the heated US Senate race between incumbent Mike Lee and independent challenger Evan McMullin.

In an ad that hit the television airwaves last week, she endorses Lee, citing his involvement in helping military families, including her family after the death of her husband, Brent Taylor. The North Ogden mayor at the time, Brent Taylor was killed in an attack in 2018 while on a yearlong deployment with the Utah Army National Guard in Afghanistan.

“I am voting for Mike Lee because he’s been there for me and my family and for our military community here in Utah,” she says in the ad.

Speaking Monday with the Standard Examiner, she said she doesn’t agree with the conservative senator on everything. She’s a registered Republican, she said, and considers herself to sit on the moderate spectrum of the party.

Moreover, she said, the endorsement doesn’t stem from Lee’s views on social issues, fiscal conservatism or his support for former President Donald Trump, which rubs some GOPers the wrong way. It’s strictly about the support she received from him after the death of her husband and what she says is his support of military families.

“I have always been able to talk to Mike Lee’s staff people,” said Taylor, who leads a foundation named after her late husband that’s focused on promoting public service, the Major Brent Taylor Foundation. Likewise, when she has referred other military families to Lee’s staff for assistance in navigating the federal bureaucracy for benefits or other matters, Lee’s office has been able to help.

Lee “is proud to have the support of Jennie Taylor and many more Utahns who have sacrificed to defend our nation,” his campaign said in a statement. Lee, it went on, “is committed to supporting our military.”

McMullin’s campaign had no comment on Taylor’s endorsement but noted the support McMullin had been getting from a cross-section of political players, including US Rep. Adam Kinzinger, an Illinois GOPer, and his pledge not to take special-interest or political action committee donations . McMullin also has the backing of the Utah Democratic Party.

As for Taylor’s involvement, it represents a deeper foray into politics than she has made before and comes in a heated contest that’s been garnering national attention.

Politico called the contest “the strangest Senate race in America,” noting, in part, McMullin’s independent status and Lee’s support for McMullin during his unsuccessful independent presidential bid against Trump in 2016. The publication called the Lee-McMullin battle the “most competitive Utah Senate race in perhaps 30 years.”

Taylor noted that she stayed out of the GOP primary in the race, which saw Lee fend off challenges from two fellow Republicans, Ally Isom and Becky Edwards. Generally, she said, she’s “tried to stay out of as many races as I can.”

Given Lee’s role in helping military families, though, she decided to give him her backing. Just because she backs him doesn’t mean he’ll win — she noted that she also endorsed Lynn Satterthwaite in his 2019 bid for North Ogden mayor, but Satterthwaite ended up losing to Neal Berube by a 15.2% margin.

Don’t take Taylor’s involvement in the Lee campaign to suggest she has interest in vying for public office herself. She noted how tough and bitter campaigning can be, noting, in part, the experience of her husband as North Ogden mayor.

“I don’t think I’d wish that on my worst enemy,” she said. She’s seen good people run for office only to get “torn apart” while campaigning or after taking office.

The Deseret News, meanwhile, noted that Lee has mustered the support of all GOP US senators with a notable exception — Mitt Romney, Utah’s other representative in the US Senate.