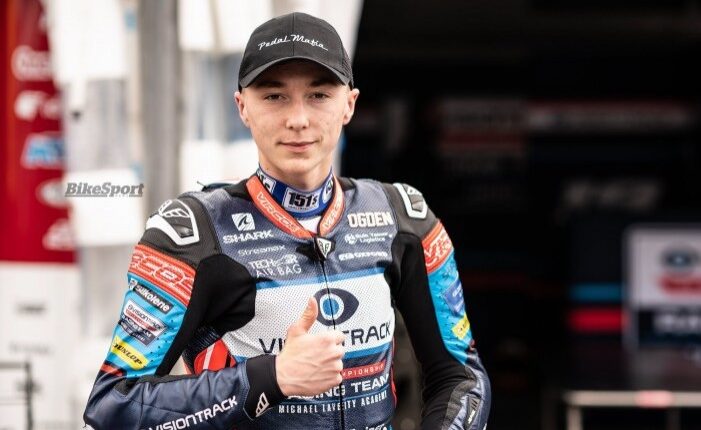 VisionTrack’s Scott Ogden has certainly made his mark on the World Championship after just 11 races in Moto3 for 2022 so far.

Firmly in the points for each of the five races he’s finished, with a highest result of 12th at both COTA and Jerez, provided a bright start to the young Brit’s season but six DNF’s have more than dented his potential in the standings.

Despite the disappointments of recent races, Ogden’s confidence and self-belief is growing, and rightly so. With five weeks off to both assess and digest his progress, he keen to get cracking as his first home GP approaches.

“The first part of the season has been really good,” Ogden said when Bikesportnews.com caught up with him recently. “Well, I’m satisfied with the speed I have, it’s just the results need to come and that’s just putting everything together in the second half of the season.

“It’s one of those things where, like at the second round, I already got 12 place so it’s like, ‘Oh, your results haven’t come on’, but in general, they’ve got better. There’s been less crashes and the pace has been a lot faster – well, since we’ve been in Europe, to be fair.

“The five weeks has come at the right time, after a couple of big crashes. It’s time to reset, regroup and just learn some new things and hopefully put them into practice when we get to Silverstone.

“Going into the second half of the season, I think it’s just trying to find that little bit extra,” he said on his ongoing progress with the Honda. “I’m about half a second off being on pole position, which is 10th to 15th at the moment, so it’s just finding that last half second – which doesn’t seem so much but it’s definitely the hardest half a second to find!

“There’s areas to come from just working with the data and trying to find a little bit better setting for me but also in my riding, keep progressing and just trying to adapt to the World Championship way of riding. Making sure that I’m doing everything possible to be at the front. I’m sure the mechanics and everyone are doing the same so everything will come together eventually, it’s just time.

So which of the final races is he most looking forward to, alongside the obvious draw of the Silverstone home crowds?

“I’m definitely looking forward to my home round probably the most just because it’s one of my favorite tracks. The home race is a special one for any rider so that one’s the one I’m looking forward to the most but new track wise? I’m not 100% sure. They all have different elements and they all look great, but I definitely think Motegi will be a good experience – the country, everything.

“These last nine races, I definitely want to kick on into the top ten,” he said confidently. “It’s been weighing over me the last maybe four or five races, just because I’ve been so close and I haven’t quite got that result.

“So yeah, if I can get a top ten but then keep building on it – I don’t want to just stagnate in tenth I want every race to try to get a bit closer to that podium and you never know. Towards the end of the year if we kick on really well, there’s a chance of taking a top five or even a podium.

“The World Championship, it’s definitely a big step for any rider,” Ogden reflected on his journey from the British Talent Cup through to the MotoGP paddock. “I think I’ve definitely made the jump pretty well.

“I feel the biggest learning curve is just being able to battle as hard as them. They’re on another level of aggression and it’s just trying to get that out of me. I know I’ve got it in me, it’s just having the confidence and the ability to be able to battle with them hard.

“It’s just that imposter syndrome, that I don’t really have now because I know I deserve to be there!

“It’s just trying to get stuck in. I just need some laps in the front group, just to learn what they do and where they overtake. So they don’t lose time as well and get re-overtaken so yeah, it’s just a bit of race craft.”

While the 18-year-old has learned a lot in the past four months, its not actually his Sunday performance that has stuck in his mind.

“I’m most proud of probably Sachsenring, being fourth in the dry,” he said of the penultimate weekend before summer recess. “Especially FP3, which is pure speed. Everyone’s got 45 minutes to go as fast as they can and that day, I was the fourth fastest in the world. So yeah, it’s a session that’s meaningless, but it’s also important to help me believe I’ve got the speed and I can do it in the second half of the season!”