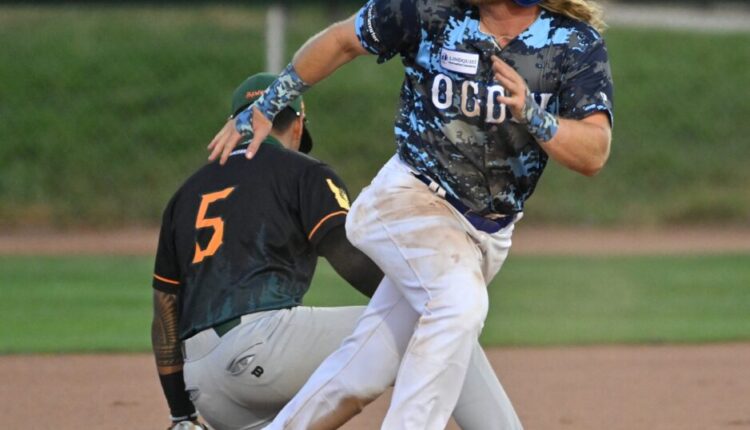 Ogden Raptors outfielder Brian Dansereau rounds second base in a late-July 2022 game against the Boise Hawks at Lindquist Field in Ogden.

OGDEN — Pitching usually isn’t a problem when Ronny Orta is on the mound for the Ogden Raptors.

Though it looked problematic through one inning, Orta settled in to his usual good work and threw the Raptors to a 9-3 win over the Rocky Mountain Vibes on Tuesday to open a 12-game homestand.

The Vibes (24-40, 8-10) were behind Orta but making good contact. Two right-handed hitters pushed singles to right field before catcher Luis Navarro lined one to the wall in right, just inching over the top for a three-run homer to put the visitors ahead 3-0 in the first inning.

After that, Orta surrendered just four hits over the next six innings, inducing a double-play grounder to end his night in the seventh inning. Over his seven frames, he allowed seven hits, three earned runs, struck out five and walked two.

Outfielder Brian Dansereau got Ogden on the board in the second with a solo homer, and the Raptors (39-28, 10-9) tied it 3-3 on a two-run, two-out single from Reese Alexiades in the third.

Catcher Logan Williams sent an opposite-field solo shot to right to put Ogden ahead 4-3 in the fourth, and Jesus Valdez singled in Pat Adams in the fifth for a 5-3 tally.

The lead grew to 8-3 in the sixth when Freddy Achecar and Dansereau hit consecutive doubles, Williams singled in Dansereau, and Dakota Conners doubled in Sonny Ulliana.

Valdez singled to score Josh Broughton in the eighth inning for a 9-3 lead.

Brandon McCabe threw a scoreless eighth for Ogden, pitching around a single and a fielding error.

New Raptors pitcher Juan Santos took the hill in the ninth inning, running into trouble after an error and hit-by-pitch, but got Cesar Lopez to line out to Conners at second to leave the bases loaded and end the game.

The two teams continue the series at 7 pm Wednesday.

Ogden made a notable signing to open the series, inking former Missoula infielder Matt Warkentin to the club. Warkentin signed with the Chicago Cubs out of Missoula last season and was released out of single-A last week. The 6-foot-6 player pinch-hit in the eighth inning and flew out to the track in right.

Also new to the team, Gunnar Buhner made his first appearance at home, playing third base in the ninth inning. Buhner is the son of former Seattle Mariners standout Jay Buhner.

‘The Secret of Skinwalker Ranch’: The mysterious man behind the show