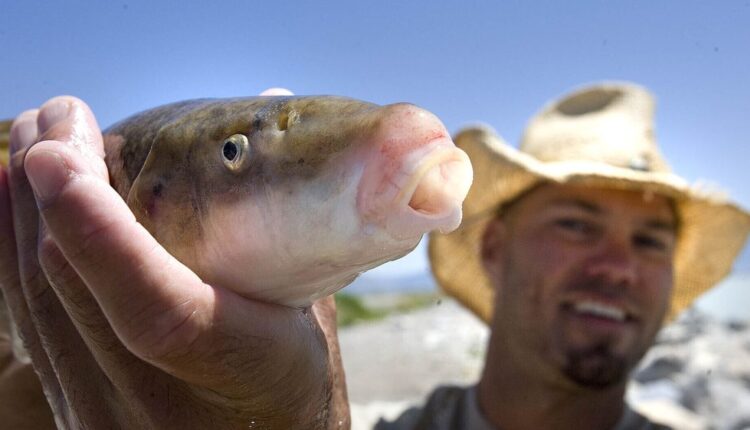 The gray-brown, five-foot-long June sucker fish only exists in one place in the world: in Utah Lake. Due to habitat loss and an invasive fish species, there were only about a thousand fish left at a time. But now the population is recovering thanks to a $ 50 million delta restoration near Utah Lake.

The fish live in Utah Lake, but their main spawning grounds are in the Provo River and surrounding wetlands. The Provo River Delta Restoration Project aims to restore this ecosystem. Due to his efforts, 4,300 tracked fish are spawning in the Provo River this year, a number that is likely 10-20% of the total population.

It is a far cry from the population low of 1,000 in 1986 when it was classified as an endangered species.

Scientists hope the population could recover even further as the restoration project brings back the sucker’s historic habitat.

Let the water flow again in the delta

The Provo River used to fan out into several tributaries and grassy wetlands before meeting Utah Lake, but over the years the area has been drained, cleared, and dammed – making way for roads and an airport. Without the marshland and the small ponds, the breeding space for the suckers was restricted and young fish larvae could not reach the lake.

As part of the restoration project, the Skipper Bay levee is being lowered to bring back the meandering streams that were used by the sucker. The restoration of the natural streams will create a new recreational space for the community and improve the quality of the water. It is the result of a 19-year partnership with the Utah Reclamation, Mitigation and Conservation Commission; US Department of the Interior and the June Sucker Recovery Implementation Program, among other agencies, as part of the Central Utah Project.

“The Provo River has many water rights – people take water from the river for their crops, their homes, and the like,” said W. Russ Findlay, program coordinator for the Central Utah Program Completion Act at the US Department of the Interior. “So for a few years there was very little water in the Provo River, through town, and through town [the project area]. “

By funding water conservation projects through the ministry, it was possible to save water to divert it to the new tributaries, Findlay said.

“There are many problems that originally caused the fish to decline, but water use was one of them, and I think that was what put it on the endangered species list,” said Melissa Stamp, project coordinator for the Utah Reclamation, Mitigation and Conservation Commission.

Shortly after it was listed as an endangered species, some of the remaining June suckers were caught in Utah Lake and transported to a hatchery in Logan where they were raised in captivity. Since the early 1990s, thousands of June suckers have been stored from the Logan hatchery in Utah Lake, resulting in a steadily increasing adult population.

As the population increased, the project needed to ensure that the sucker habitat in Utah Lake could feed the fish.

One of the most critical measures taken in restoring the sucker habitat has been removing invasive carp fish that are destroying the lake’s underwater plants. Without control, carp would overwhelm the sucker and make the lake muddy.

“[Carp are] the boars of the water, ”said Russ Franklin, local coordinator for the June Sucker Recovery Program. Franklin explains that the carp in the lake eat vital plants. “They call [the vegetation] Macrophytes, which are underwater plants. This is what we need; not only does it help the ecosystem in terms of oxygen and other things, but also soil stability. You don’t think you need soil stability in a lake, but the macrophytes act like cluster grasses and everything else to prevent erosion and [cloudy] Water happens. “

In the early 2000s, carp made up “an overwhelming 91 percent of the total fish biomass in Utah Lake,” according to a report from the June Sucker Recovery Implementation Program.

Fighting habitat-destroying carp is a large and time-consuming task. A private fishing company was hired to catch the net and manually handle each fish – and throw it back into the lake if it was a non-invasive fish like the June sucker. With these efforts, more than 29 million pounds of carp have been removed from Utah Lake.

The fish that fed the pioneers

The June teat isn’t cute and cuddly, but it’s an important species for Utah Lake and the Provo River.

“[The June sucker is] referred to as an indicator type, ”said Franklin. “They are basically your thermometer – which is bad because that means they are more prone to change. Since the June sucker is doing better, he points out that the ecosystem will be back to how it should be natural. “

Healthy June suckers benefit all of Utah Lake, with the fish serving as a watchdog for the lake’s water quality, habitats, and other conditions of the state’s largest natural freshwater body.

“Historically, sucker in [Utah Lake] were the main species of fish in the lake, ”said Findlay. “This area here was pioneered in starting in 1840, and when they first came here they came in quite a large group and they failed in their harvest so they tried to close the first at least a couple of times produce years. So these early settlers really relied on Utah Lake, the fishery, and the June suckers to survive. “

The fish was downgraded from Endangered to Endangered in December 2020, meaning the June sucker is “no longer critically endangered” according to the US Fish and Wildlife Service. The June suckler is only the fifth species of fish to have been classified as threatened since 1973 when the Endangered Species Act came into force.

“There was a lot of things in home and business development … a lot of ecosystem degradation,” Findlay said. “I think the people of Utah owe it to this species to create something for them.”

If the sucker comes back, so do the people

The Provo River Delta restoration project will also include new boat trips, access points to access the river and delta area on foot, an observation tower, and bird and wildlife viewing areas. In addition to a bridle path, paved paths and improvements to existing paths are also being built.

With more people going outdoors across the state due to the COVID-19 pandemic, Franklin believes the area will be a major draw for the community.

“I think there will be a lot of people out there trying to recreate themselves down here with non-motorized stuff,” Franklin said. “Paddleboarders, kayakers, canoeists. I think it will be impressive; I mean when you see the trail and how many people [already] Use the path through here. I think you will see a lot of people riding and running. “

(Jordan Miller | The Salt Lake Tribune) A section of the Provo River Delta construction project that will connect Utah Lake to a new tributary on Wednesday, June 16, 2021.

A small dam is being built at the mouth of the old river canal to keep the water at a more constant level, as well as ventilation systems to remove leaves and other materials that often end up in the river. To solve the carp problem and give the June sucker some space, the project plans to hold some “creative fishing derbies” to take something away from the competition.

“We believe there will be great sport fishing here,” said Stamp. “[The area is] 200 hectares of publicly accessible sport fish access.

Wild animals such as deer and pheasants are already making the area their home, and guided hunts are also being considered for waterfowl.

“[People] will benefit even if they never get to the Delta, ”said Franklin. “There aren’t many freshwater lakes that are like this. Managing and helping this lake is a daunting task … [The] June-Sauger will show us the changes better than anything else we’ve done so far. “

Although 90 percent of the state is suffering from extreme drought, the project continues, Franklin said. When the water level is lower, it is easier to follow the fish as they move via antennae in the river, but the June suckers did not see much difference from previous years.

“The more success we have in recovering the June vacuum cleaner, the more flexible we are in managing the water resources for people,” said Findlay. “Everyone will benefit from it.”