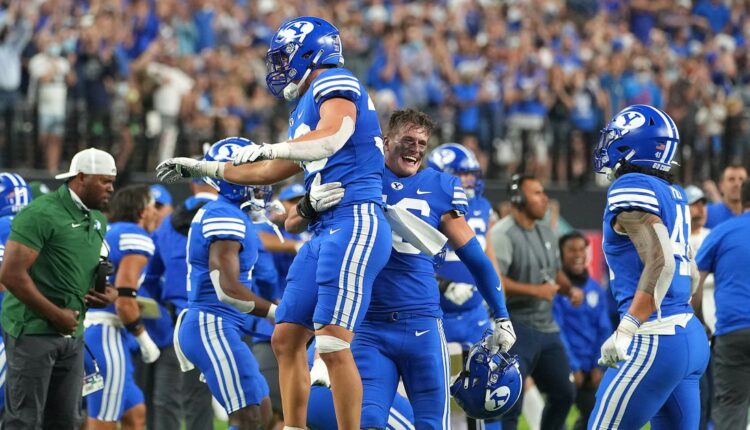 It’s officially Rivalry Week … in September, but it’s still Rivalry Week in Utah. Fans may be divided on what this game really “means” in the PAC-12 era. At best, it’s one of the biggest rivalries in all of college football, steeped in tradition, full of passion (or, if we’re being honest, pure, unfiltered hatred), and hardly ever unexciting. On the contrary, keeping this series alive is difficult to justify. Apart from the tradition steeped in history and telling the fans something until the next meeting, this particular game is of little use to Utah. Rarely are the Cougars good enough to inflate Utah’s schedule. Love it or hate it, the inevitable has arrived. The 101st Holy War is just around the corner.

As if the usual banter weren’t enough to create an endless stream of headlines, quotes, and message board fodder, there happens to be some history at stake in the 2021 edition of this holiest skirmish. A win in Utah on Saturday would be an unprecedented 10th straight win, a high figure for both programs. From 1979 to 1987, the Cougars recorded nine straight wins against the Utes, an accomplishment now achieved by Kyle Whittingham as his teams have been unbeaten in the series since 2010. Although Utah already set the record for the longest undefeated streak with 21 games from 1898-1941, that streak includes three draws, and let’s face it; Nobody wants to hang their hat on a handful of ties. The question now is, does BYU have the defense it needs to open a new chapter in the record book?

Utah fans should know better than to believe head coach Kalani Sitake will show up with a lackluster defense. After all, Sitake was there before Utah made its promotion to the PAC-12, serving as a linebackers coach to the coaching staff in 2005 before taking on as defensive coordinator in 2009, a position he held until 2015 when he joined Oregon State’s coaching staff in the same role before assuming the position of head coach at Provo just a season later. While at the U, Sitake pitched some of the toughest defensive units in the nation and often pitched a top 25 national defense even after the Utes joined the PAC-12, and his BYU roster in 2021 looks no different, especially at the linebacker.

Sophomores Keenan Pili (6’3 “, 233 lbs), Max Tooley (6’2”, 215 lbs) and Payton Wilgar (6’3 “, 235 lbs) all return after contributing to the Cougars’ tenth defense last season; a defense that only allowed 15.3 points and 317.4 yards per game in 2020. Pili looked particularly dynamic in BYU’s week one match-up against Arizona, collecting a total of 17 tackles on the team, along with one of the four sacks of the Cougar and a tackle for loss, the Provo native appears to be one of the more disruptive defenders the Cougars will pitch on Saturday.

Up front, Tyler Baty (6’5 “, 265 lbs) looked promising, making four tackles, more than any other lineman, along with a sack and TFL in the first week, while Senior Uriah Leiataua (6’4”, 255 lbs) played the role of a time-tested good and came with a critical third-down sack that matched his three total tackles.

Downfield, Second Free Safety Hayden Livingston (6’1 “, 200 lbs) had the defensive play of the game against the Wildcats and got a game-defeating interception late in the fourth quarter while recording four solo tackles and generally outperforming juniors Malik Moore ( 6’1 “, 190 pounds). Moore is still ready to start against Livingston against the Utes but expects a heavy dose of the emerging sophomore.

Where BYU needs to improve if they hope to end their nine-game losing streak against the Utes is limiting yards after catching short passing games. Arizona’s top receiver, Stanley Berryhill III, won 102 yards with a career high of 12 catches against the Cougars, but 83 of those yards were earned after the catch, with all passes coming less than 10 yards down. With a trio of NFL-caliber tight ends and a dynamic playmaker in Britain’s Covey, Utah’s offense is easily able to split up the Cougar defense with chunk yardage.

Unfortunately, if the story is any clue, the level of talent in the field is mostly irrelevant. No matter how much bigger, faster, and stronger one team is over the other, the hatred between these two rivals ultimately makes this game tighter than it often should be.