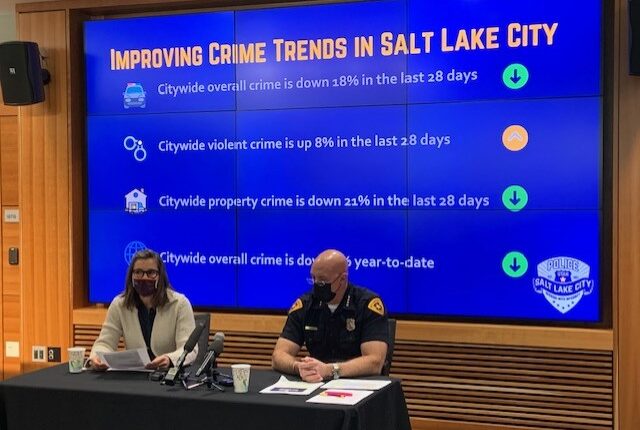 Overall crime goes down slightly in Salt Lake over past month, but city officials see a bump in violent crimes

SALT LAKE CITY – Salt Lake City police say they are on the right track when it comes to reducing crime across the city. However, the latest data shows that there are several ways the city could improve.

The trends look good on paper, at least. Total city-wide crime has decreased 18 percent in the past 28 days, according to data from Salt Lake City police. In addition, the total number of crimes in 2021 is 2.2 percent lower than a year ago. Mayor Erin Mendenhall said these were good signs, but overall crime was still way too high.

“This in no way represents the absence of crime in Salt Lake City,” she said.

Mendenhall said several factors are behind the high crime rates. Housing shortages are concentrated in much of poverty along State Street, and small crimes like break-ins and car robberies are more likely to happen in poor areas, Mendenhall said. She also has a request for anyone who may hesitate to call the police and report them if they have been the victim of a crime.

“Please call and report your crime. Go online and report the crime if it is something that has already happened and has passed, ”she asks. “That is important and determines how we use our resources.”

“What we’ve seen lately is a lot of serious street abuse,” he said. “Unfortunately, there are serious family crimes that drive up the number of violent crimes.”

Brown is concerned about a possible spike in domestic violence cases over the holidays.

“We take family violence very seriously and if we are sent on a phone call we will make sure the victims are safe,” Brown said.

The department is still putting together a violent crime task force, but Brown said it still has 55 open positions for police officers to try to fill. New officer classes are expected to take to the streets in the coming months.