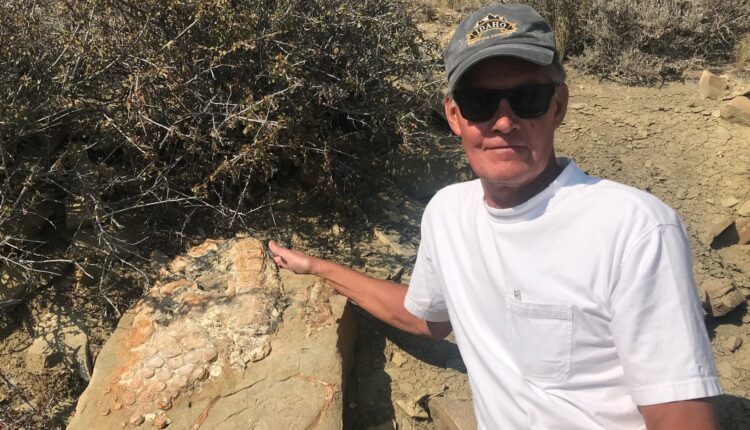 VERNAL, Utah – A Utah boater helped paleontologists retrieve one of the most famous specimens of a rare fossil earlier this year.

Alan Dailey of Hooper, Utah, was boating at Flaming George Reservoir in northeast Utah in May when he found something incredible … and incredibly old.

Dailey found a fossil in a 400-pound block of sandstone. He contacted state paleontologists about his find, sent photos and left the specimens for experts to retrieve.

The Hooper man returned to the site with a team of paleontologists from Utah State Parks and other partner organizations. There he showed them where he first encountered the fossilized remains of a marine reptile over 200 million years old.

Illustration provided by the Utah Department of Natural Resources

Ichthyosaur fossil is a rare find in Utah

The team excavated the fossil, which consisted of the “forefin, vertebrae, and ribs” of an animal known as the ick-thee-oh-sore (meaning “fish-lizard”), “the Utah Division of Parks and Recreation reports. Ichthyosaurs were “dolphin to whale-sized and swam in the seas of the Mesozoic Era from the time of the first dinosaurs” until shortly before their extinction. The ichthyosaur found was the size of a dolphin with a similar shape, snout and conical teeth.

Previous ichthyosaurus fossil recordings were on a much smaller scale and consisted primarily of isolated vertebrae. A press release said in the parks: “Alan Dailey’s Fund, now in the Utah Field House of Natural History, includes the nearly complete and articulated forefin, as well as 10 ribs and 19 articulated vertebrae.”

Dailey’s chance encounter and prompt report to the state paleontologists have now resulted in the recovery of one of the finest ichthyosaur fossils known from Utah.