Patricia Sue Philpot was born June 26, 1931 to Clarence Herbert Rasmussen and Pearl Eveline Mickelsen in Salt Lake City, UT. The oldest of three children, Pat was preceded in death by the second to the oldest, her sister Joanne, and survived by her brother Rodney, the youngest. As a sophomore in high school, Pat, along with her family, moved to Copperton where her father worked for Kennecott as a railroad electrician. Although Pat was initially displeased with moving from Salt Lake City to the small town of Copperton, she proceeded to develop lifelong friendships with her classmates. Referring to themselves as “The Gang”, this group of Bingham High School graduates stayed in close contact for the remainder of their lives, Pat being the last “Gang” member to pass away.

Fall of 1949, Pat commenced nursing training at Holy Cross Hospital. Her children remember Pat sharing many stories about the trials and joys related to this period of her life. The vocation of nursing suited Pat’s talents and personality well as she eventually worked as a Registered Nurse, serving the community of Magna and her own family in this capacity.

During Pat’s nursing training, in June of 1951, Pat met her future husband, Myron Charles Philpot, on a blind date. A year later, Pat and Myron married on August 22, 1952. Their marriage endured for nearly 65 years, until the day Myron passed away at their home in Magna on April 6, 2017 at the age of 89.

Pat was an amazing cook, perhaps something she learned from her mother. She would get up early to prepare warm breakfasts for the family throughout the week and lunches for Myron to take to work and for the kids to take to school. She also planned and prepared homecooked meals at dinnertime most every day of the week. It was a rare occasion when the family would eat out for dinner due in part to the extra cost involved. When all six kids were living at home, money was usually tight. Both Pat and Myron were quite frugal while still providing nice things and opportunities for the family. They seldom spent money on themselves.

Pat’s positive disposition and inner strength radiated to those with whom she interacted. Line dancing and fitness classes at the Magna Senior Center were an important part of Pat’s senior years in Magna. Faced with the challenges of dementia in her final years of life, Pat demonstrated remarkable adaptability, stating her commitment to go with the flow of life despite obstacles life presents.

Pat’s children are grateful for the loving care provided to Pat by the team members of Sunrise Senior Living in Holladay, Pat’s home for the past two and a half years.

In lieu of flowers, the family welcomes any donation to a charity of your choice. 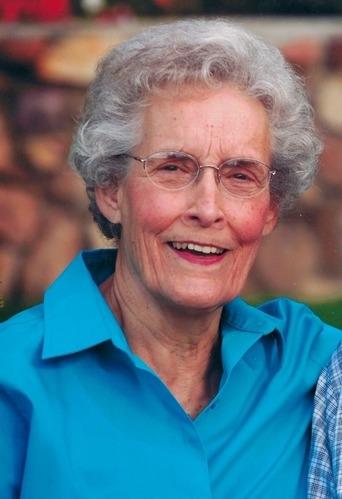