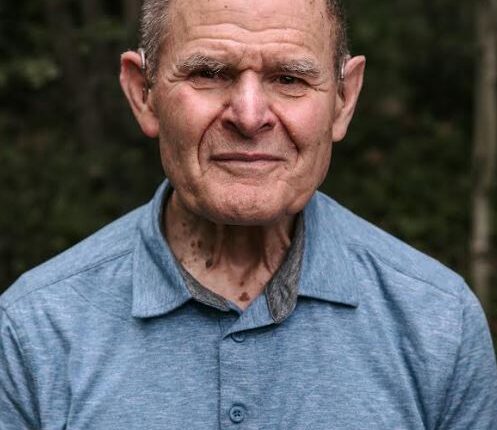 Peter Peay Ashworth, 90, of Provo, Utah, peacefully passed away on November 8, 2022, after a short battle with cancer. His last days were spent surrounded by all his living children.

Peter was born on June 10, 1932, to Anna and Victor Ashworth, in Provo, Utah. As a young boy, his family moved to Bakersfield, California, where he spent his formative years. From 1952 to 1954 he served in the Army during the Korean War. From 1956 to 1959 he served a mission for The Church of Jesus Christ of Latter-day Saints in Argentina and Chile. There he fell in love with the Spanish language, which led to a lifetime of studying and teaching Spanish literature. Peter graduated from BYU in 1963 with a BA in Spanish studies and earned a Ph.D. in Spanish literature from Oklahoma University in 1966.

While at BYU, Peter, age 28, met 18-year-old Kathryn Robbins. He knew he was much too old for her, and she knew she was much too young for marriage. But fate knew more than both, and they were married two years later in the Logan Temple, on June 11, 1962.

The couple, whose love and devotion was admired by all who knew them, found their greatest joy in rearing their seven children. They filled their home with music, faith, literature, global foods, humor, scholarship, and love. Ever the feminist, Peter was a hands-on father and took joy in sharing all the child-rearing responsibilities with Kathryn. As he said, his favorite hobbies were his wife and his kids. They were married nearly 48 years, until cancer took Peter’s sweetheart in 2010.

Peter was passionate about the pursuit of knowledge, and he instilled this passion in others over his long career as a Spanish literature professor at BYU. In and out of the classroom, Peter thrived on discussing ideas and was an educator until the very end. Studying the scriptures with Peter was both a spiritual feast and a lesson in scholarship. He never shied away from challenging topics and enjoyed the deliberation more than the resolution. Likewise, Peter had an uncanny memory. Even in his last days with his family, he was defending champion of Trivial Pursuit and Name That Tune.

Whether hiking in the Uinta Mountains, birdwatching near the lake, or growing heirloom tomatoes in his garden, Peter’s love of nature was pervasive. Even in retirement, Peter never stopped being active. His hobbies included daily exercise, discovering new recipes, reading, completing even the most challenging New York Times crossword puzzles, and watching movies and PBS shows. But most of all, he loved spending time with his children, grandchildren, and siblings.

Funeral services will be held Saturday, November 26th, at 11 am at the Edgemont 6th Ward chapel, 4056 Timpview Drive, Provo, UT 84604. The family will receive guests prior to services at 10 am In lieu of flowers, please make donations to communityactionprovo .org