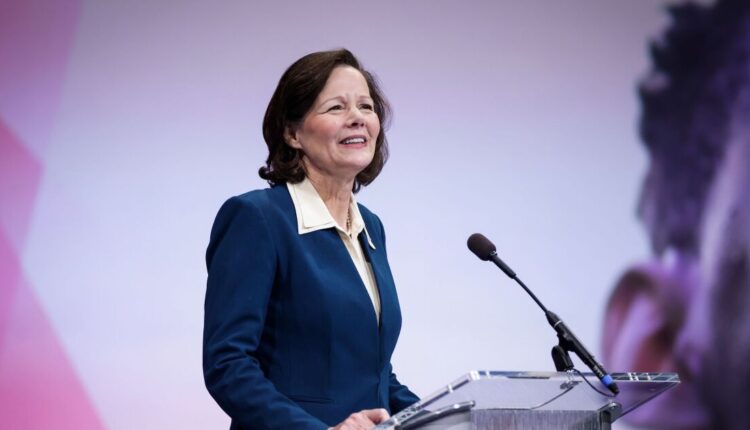 Primary General President Susan H. Porter invited listeners to picture themselves walking up a path to “eternal life,” during a devotional at Brigham Young University on Tuesday, Nov. 1.

On this path they trudge along, sometimes stumbling, looking down at their feet. They are weighed down with heavy backpacks labeled “things to do,” which is full of lists of things they are trying to do for school, work and to be good members of the Church.

“Now picture what changes when you decide to look up,” President Porter said. Suddenly those on the path can see the beauty that surrounds them, feel the warmth of the sun and remember that the Savior offered gifts for the journey — faith, repentance, hope, His Spirit and more.

“Now, instead of simply trying to put one foot in front of the other as you try to do your duty, you are focused on the Savior. How can you receive His gifts, His knowledge and His love?”

No longer are prayer, scripture study and searching the words of the prophets items on a to-do list. “Instead, they have become your lifeline for receiving the gifts you need,” she said.

Speaking to the students and faculty gathered at the Marriott Center on the Provo, Utah, campus, and listening virtually, President Porter declared, “My message today is that the gospel of Jesus Christ is a gospel of joy because our Heavenly Father and the Lord Jesus Christ are inviting us to receive Them and Their gifts of infinite worth.”

President Porter explained that receiving the gifts of God is a foundational part of becoming a disciple of Jesus Christ. “As we receive God’s gifts, we receive a portion of Him — His spirit, wisdom and knowledge. And, like Alma, Enos and Abish, when we receive gifts from God, we are filled with a desire to share those gifts with others.”

At the invitation of President Porter, Rachael Anderton, a graduate student studying vocal performance, then sang “More Holiness Give Me,” which lists some of the many gifts offered by the Lord: holiness, strivings within, patience, sorrow for sin, faith , sense of His care, joy in His service, purpose in prayer, gratitude, trust in the Lord, pride in His glory, hope in His word, tears for His sorrow, pain at His grief, meekness, purity, strength, freedom, “more, Savior, like Thee.” 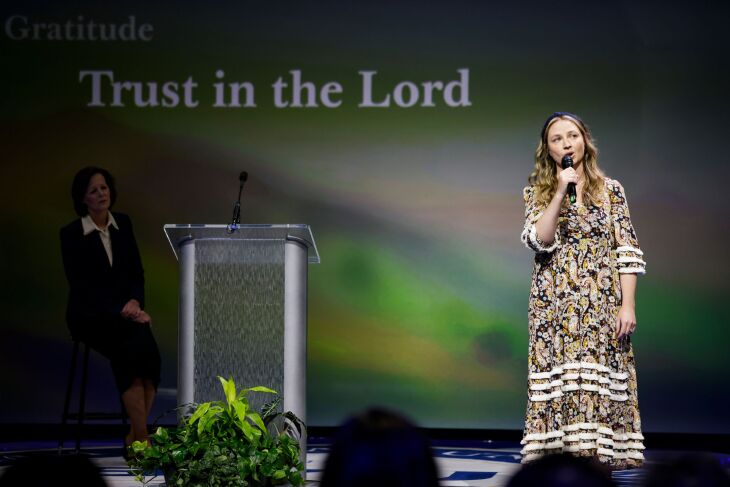 “How can we receive these gifts?” President Porter asked. President Henry B. Eyring, second counselor in the First Presidency, taught: “The commandments and covenants He offers you are not tests to control you. They are a gift to lift you toward receiving all the gifts of God” (“Legacy of Encouragement,” October 2022 general conference).

President Porter, who earned an undergraduate degree in chemistry from BYU, explained that an atom of fluorine is unstable because it lacks an electron. It becomes more stable and complete as it bonds and shares an electron with cesium, becoming cesium fluoride.

“Similarly, as we see our lack and draw near to the Savior, He shares His gifts with us, making us more complete, stable and whole,” she said. 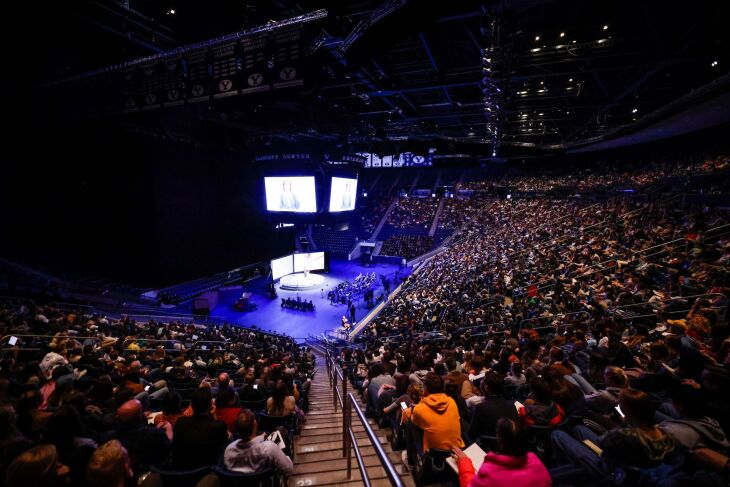 This time of life is busy, with lots of pressure, President Porter noted. “You might also feel stressed spiritually.” However, seeing one’s weakness is not a reason to be discouraged; it is a reason to be humble.

“Humility opens the way for us to receive our Heavenly Father’s gifts through the enabling power of His Son, Jesus Christ,” President Porter said.

The Savior has said, “Behold, I stand at the door, and knock: if any man hear my voice, and open the door, I will come in to him, and will sup with him, and he with me” (Revelation 3 :20).

The Savior waits at the door of one’s heart but will not override agency. “Softening our hearts invites Him in.” 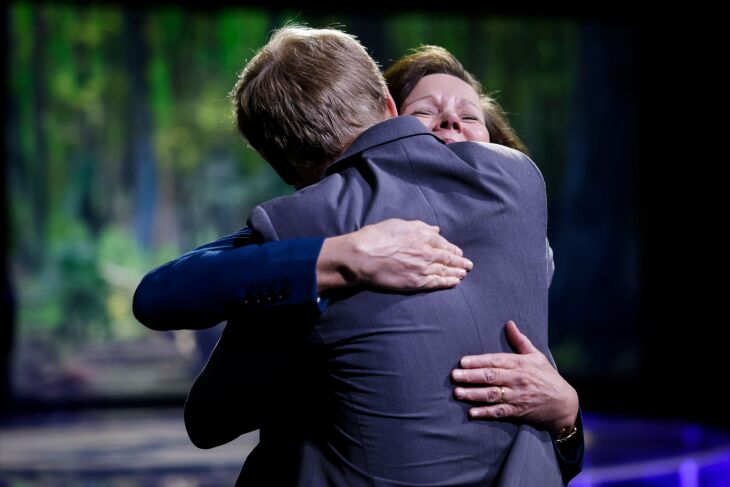 Primary General President Susan H. Porter hugs her grandson, who is a student at BYU, after giving an address for BYU campus devotional held at the Marriott Center in Provo, Utah, on Nov. 1, 2022.

President Porter shared a video of Elder Carl B. Cook of the Presidency of the Seventy, who recalled how he was feeling overwhelmed as a new General Authority Seventy. As he entered an elevator in the Church Administration Building, he wondered, “How can I possibly do this?” and stared blankly at the ground.

A cheerful voice, which turned out to be from President Thomas S. Monson, reminded him, “It is better to look up!”

“What happens when we look up to our Heavenly Father and His Son?” President Porter asked. “If we are too busy focused on doing, we may forget to look up, losing focus on the Giver of all heavenly gifts.”

Instead of making a list of invitations from the general conference, President Porter invited students to consider focusing on all the gifts they’ve been invited to receive from a loving Heavenly Father. In her own study of President Russell M. Nelson’s talk “Overcome the World and Find Rest,” President Porter said she has found more than 20 specific gifts individuals can receive.

“As we focus on receiving the Savior’s gifts, we will feel joy and purpose as we seek to understand the changes we need to make and then act,” she said. 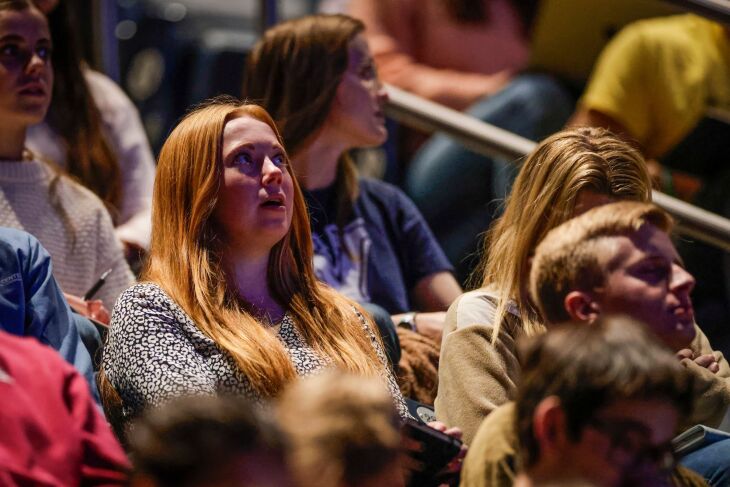 Students listen to remarks given by Primary General President Susan H. Porter during a BYU campus devotional held at the Marriott Center in Provo, Utah, on Nov. 1, 2022.

President Porter noted that sometimes the gifts of God come quietly in small increments, but every impression or whispering of the Spirit is a gift. “Through those gifts we know that God is aware of us, that He needs us, and that He is walking with us. Those impressions can be the most healing and encourage of all gifts.”

Six years ago, on the day of the funeral for her husband, Elder Bruce D. Porter, one of their sons reported water dripping through a sliding glass door in her home. Eventually she consulted a contractor and discovered there was water damage to half of the back of the home. “How could I move forward with all that needed to be done, I wondered, when I was still striving to simply go through the motions of daily life?” President Porter recalled.

One day the contractor gave her a list of four items to buy at a home improvement store to help with the repairs. As she arrived at the store that night, she found there were many choices and she had no idea which one to choose. She tried to find an employee but failed. After a half-hour of looking fruitless, she was near tears, President Porter said.

She pleaded for help in prayer and a minute later a friendly, knowledgeable employee approached her and helped complete her purchases in 10 minutes.

“After Bruce’s passing, I received many gifts. But none more priceless than the knowledge I received on a dark Friday evening, in a deserted aisle in Lowe’s. There I received a witness to my soul that God was with me and would be with me in the days and years ahead,” President Porter said.

The greatest blessing of seeking to receive the Savior, His gospel and His gifts is that as individuals receive Him, He will receive them. “Through His great and atoning sacrifice, the Savior broke the bands of death and opened the door for all of us to return to live with God, our Father,” President Porter said.

As the Savior told the Nephites after His Resurrection: “Behold, mine arm of mercy is extended towards you, and whosoever will come, him will I receive” (3 Nephi 9:14).

In conclusion, President Porter said: “May you look up and seek to receive the gifts you need. I bear witness that as we seek to receive our Heavenly Father, His Son, and Their gifts, there will ‘not be room enough to receive [them]’” (Malachi 3:10).