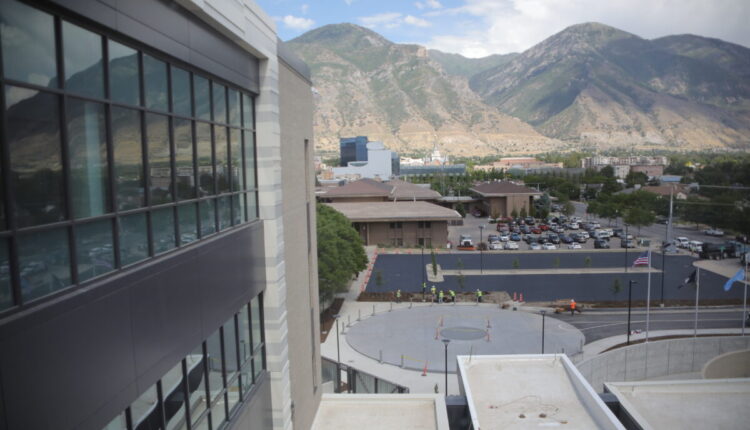 The old Provo city office is seen from the fourth floor of the new building on Thursday, June 30, 2022.

The Provo City Council held more discussion Tuesday during its work session and regular night meeting on changes to its current Neighborhood Program, which provides residents with a direct avenue to work with city leaders to address issues in their communities.

The new, upgraded version would be called the Neighborhood District Program.

That work resulted in a proposal to embrace the community-building nature of the program while increasing transparency and pursuing consistent engagement with the council and other city departments.

The current program has the city divided into approximately 34 neighborhoods with each one having an elected chairman and in some cases a vice chairman. The new program would shrink that to five districts with six to eight neighborhoods in each district. There would be a chairman and possibly two vice chairmen, a suggestion by one of the neighborhood chairs.

“We have such a great thing going in Provo, we forget in other cities people get together and organize themselves,” Tapahe said.

On Tuesday, the Neighborhood Committee told the council it has gone through several emails from residents and had narrowed down the main interests or concerns about the upgraded program.

Some of the suggested changes that may be added to the program include implementing four-year terms, allowing for anonymous feedback about appointees, adjusting the frequency of meetings, adding two vice chairs, increasing communication channels and tweaking the number of individual neighborhoods.

Another suggestion from the public was that volunteers received incentives, a proposal that sparked much discussion and some concern among members of the council.

Some members of the council like Councilman Bill Fillmore said they thought it was a good idea to show appreciation for volunteering and even suggested a year pass to the Provo Recreation Center might be in order.

However, council attorney Brian Jones asked where the money for incentives would be coming from. It was also noted there are many volunteers on other boards and committees who volunteer freely and do not receive incentives.

When it came to the mandatory meetings, there was some division as to whether the meetings should be held monthly or every other month. All meetings would be held in the new city building.

In a straw poll of the council, the majority went with every two months.

According to feedback, email was determined to be the preferred method of communication and the council encouraged building resident lists to send out city information as well as receive emails on what is happening in the district neighborhoods.

Councilman George Handley added, “We have an obligation to hear the people.”

Residents indicated they would like more training in their volunteer positions and with the program changes.

Tuesday was a public hearing for residents to give their input on the new program. It is anticipated the council will vote on the matter at its Aug. 9 meeting, which also includes a truth-in-taxation hearing.