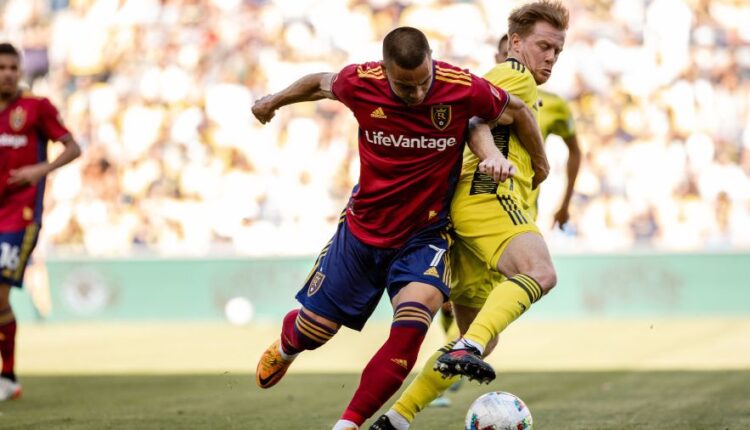 SALT LAKE CITY – Real Salt Lake suffered its third defeat of the season as they lost 2-0 to Nashville SC in their debut game at GEODIS Park. The loss also marked the first victory for Nashville at their new stadium.

Manager Pablo Mastroeni started Rubio Rubin over Sergio Córdova who was withdrawn from the first half of the fixture against the LA Galaxy a week ago with a leg injury. Rubin started alongside Bobby Wood. Justin Meram and Maikel Chang operated on the wings while Everton Luiz and Pablo Ruiz held down the center of the park. Aaron Herrera, Justen Glad, Marcelo Silva, and Andrew Brody held down the backline while Zac MacMath remained in goal.

Captain Damir Kreilach was unavailable yet again due to a back injury but newly signed Anderson Julio and Chris Kablan made the bench.

As expected, the opening helped involved a lot of attacking opportunities by Nashville who was clearly trying to assert their authority at their new stadium in front of 31,000 loud fans.

But MacMath and the backline held their own and remained compact despite the constant barrage of attacking chances by Nashville.

Real Salt Lake has struggled to find the back of the net as of late, specifically with the building throughout the field of play. Rather, Real Salt Lake has capitalized on set pieces, as was the case a week ago against the Galaxy when the only goal of the fixture occurred following a Silva header from a Ruiz corner kick.

At the half, Real Salt Lake failed to generate a shot whereas Nashville managed 10 shots and 4 on target while also dominating 64% of the possession.

Real Salt Lake’s first shot of the game came in the 58th minute when Herrera struck the ball from 30 yards only for it to be deflected and out for a corner kick. Three minutes later Mastroeni made the club’s first substitution of the game by bringing on Jasper Loffelsend for Maikel Chang in the 62nd minute.

The ensuing corner kick caused chaos for Real Salt Lake as they conceded the first goal of the game. Nashville defender Dave Romney got on the end of a loose ball inside the six-yard box and snuck the game’s opening goal home in the 63rd minute.

As the game went on, Real Salt Lake’s intensity lifted. The conceded goal also kick-started Real Salt Lake’s attempt at stealing a result on the road. They started to press with more aggression and push up the field with more intent.

Mastroeni also opted to bring on Julio and Nick Besler for Chang and Silva respectively. He then brought Scott Caldwell on for Everton Luiz who had picked up a yellow card earlier in the match.

In the 85th minute, Meram plucked the ball from Nashville captain Dax McCarty and then struck a shot from 25 yards that found the top left corner but the ball was called back due to the referee determining Meram fouled McCarty in the process of the change of possession .

CJ Sapong then put the icing on the cake in the 92nd minute as Nashville enjoyed all three points in an impressive display on the home field. It was the first win for Nashville at GEODIS Park.

Real Salt Lake returns home next Saturday, May 14, as they host Austin FC with kickoff slated for 7:30 pm

The game will be available to stream for free on the KSL Sports and KSL 5 TV apps or on KSL Sports dot com.

Who has the cheapest electricity rates in Texas?