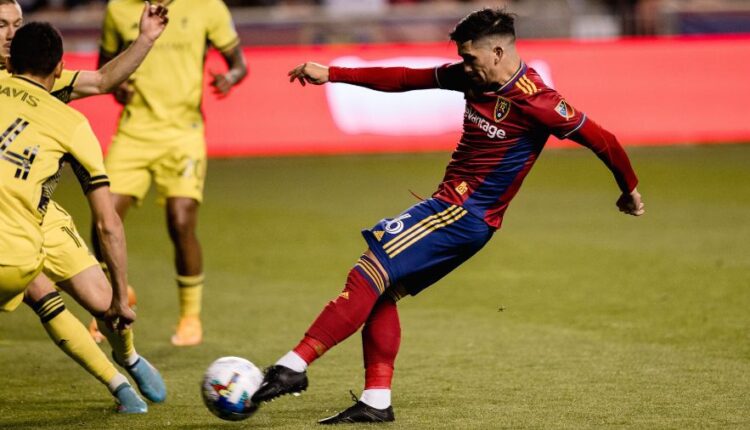 SALT LAKE CITY – Real Salt Lake will travel to Nashville SC this weekend and will play in the newly opened 31,000 Geodis Park stadium that hosted its first MLS fixture a week ago.

Nashville SC played its first 8 league games on the road and concluded the stretch with three wins, two draws, and three losses. One of those losses occurred at Rio Tinto Stadium when Real Salt Lake beat Nashville 2-1 on March 19 following a Bobby Wood 2nd minute goal and a Tate Schmitt 54th minute winner. The match was best remembered when Nashville midfielder Dax McCarty was shown a red card in the 96th minute after colliding with Bode Davis next to the corner flag. McCarty apologized via a social media video the following day.

Since March 19, Real Salt Lake has endured a six-game stretch that has involved just the lone win against the LA Galaxy, draws against Colorado, Toronto, and Portland and losses against Sporting Kansas City and New York City. Nashville, on the other hand, has endured a five-game stretch that has included wins against Colombus and SKC, draws against San Jose and Philadelphia and a loss against the Galaxy.

Real Salt Lake concluded the transfer window with a handful of signings that have reinvigorated the fanbase. Anderson Julio, who scored eight goals and added an assist after being on loan in 2021 returns on a permanent basis, Chris Kablan was acquired on loan with an option to purchase and will help solidify the backline, and Jefferson Savarino returns to Real Salt Lake for a second stint following a two-year spell in Brazil. Savarino was signed under a designated player purchase and will immediately add to the attacking third of Real Salt Lake. Pablo Mastroeni admitted that Julio will hopefully make the trip to Nashville and could potentially come off the bench late in the game.

Kablan has been with the group and has been training all week but is in need of some “serious fitness work” according to Mastroeni while Savarino will not arrive in Utah for a couple of weeks as he waits for paperwork and his visa status.

Remarkably, Real Salt Lake is hoping to break a club record as it fights for its 9th road result in 12 road appearances. Real Salt Lake has been very impressive on the road under Mastroeni’s guidance. The structure in which the club plays on the road was exemplified throughout the 2021 playoffs that concluded with a Western Conference Final birth.

The goal this weekend, as is always the case on the road, will be to get into halftime level with Nashville, before fighting tooth and nail for the win as the minutes tick on by. If Julio does come off the bench in the second half, his speed and athleticism could prove incredibly valuable.

The health of Damir Kreilach remains in question. The 2022 club captain has struggled with injury throughout the opening third of the season and is currently battling a back injury that he sustained in the 6-0 loss against New York City FC. Kreilach has not seen any action in the previous two league games and it remains unknown if he will be available for the trip to Nashville.

Real Salt Lake travels to Nashville SC next weekend. Kickoff is slated for 3 pm on Sunday, May 8.

As always, the match will be available to stream via the KSL Sports and KSL 5 TV apps or on KSL Sports dot com.