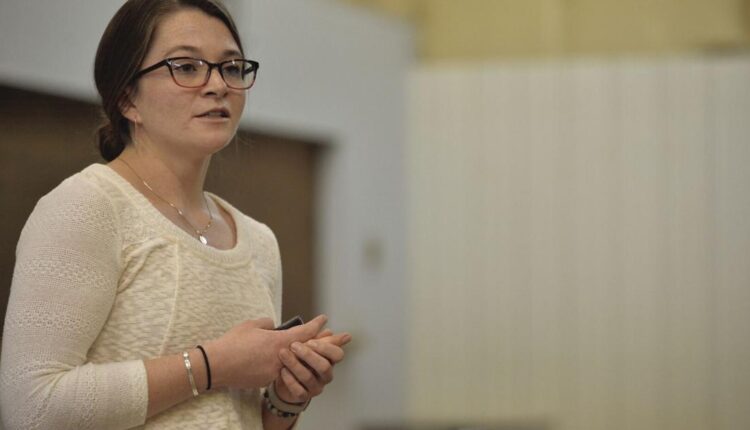 SHERIDAN — Those hoping to enjoy some fun in the sun at Lake DeSmet this season should do some research and take extra precautions before making the trip.

DeSmet is one of 24 bodies of water being monitored by the Wyoming Department of Environmental Quality this year for the presence of harmful cyanobacterial blooms, said Kelsee Hurshman, watershed protection surface water quality HCB coordinator with the DEQ.

The monitoring follows the discovery of a bloom along the western shore of the lake in late November 2021, Hurshman said. The bloom stayed in the lake for a little over a month before being killed off by cold temperatures in early January. It was the first time in five years of DEQ monitoring that a cyanobacterial bloom was detected in the Johnson County lake.

The DeSmet bloom was one of 34 detected by the department in 2021, according to the Department of Environmental Quality’s HCB website. These included multiple blooms in Ocean Lake and in the Boysen, Buffalo Bill, Flaming Gorge and Keyhole reservoirs, although no blooms have been detected in Sheridan County waters.

Harmful cyanobacterial blooms are dense, naturally-occurring concentrations of cyanobacteria, commonly referred to as blue-green algae, that pose a health risk to people, pets and livestock. They often form in warm, slow-moving waters that are rich in nutrients from sources such as fertilizer runoff or septic tank overflows, according to the Wyoming Department of Health.

HCBs, which can look like grass clippings, blue-green scum or spilled paint on the water surface, have been in Wyoming waters for decades, Hurshman said. However, the DEQ only began monitoring them in the last decade as their negative health impacts on humans and animals have come to light.

Cyanobacterial blooms can produce toxins, called cyanotoxins, which can sicken people, their pets and other animals. People or animals that have direct contact with the contaminated water by swimming in it, breathing it in or swallowing it can experience symptoms. These symptoms can vary depending on how they were exposed, how long they were exposed and the particular toxins involved, Hurshman said.

Some of the most common health issues include a rash; eye, nose and throat irritation; and respiratory problems, according to the Department of Health. Contact with HCBs can also lead to problems with the liver, kidneys and nervous system, Hurshman said.

As such, pet owners should be extremely careful when bringing their pets to any body of water where a blue-green algae bloom is suspected, Hurshman said.

“My advice is usually to look for a bloom, and if you do see a bloom — or something that looks like one — I would not let my dog ​​near the water body,” Hurshman said. “We say ‘If you’re in doubt, keep your pet out.'”

Animals should also be provided a source of clean drinking water and should be rinsed off immediately with clean water if they encounter a cyanobacterial bloom, Hurshman said.

Humans should not drink from any body of water with a bloom and should seriously consider not swimming in the body of water, Hurshman said. If you do decide to go for a swim, be sure to rinse off with clean water immediately to avoid health impacts of contact. If you feel sick or get a rash after coming into contact with a bloom, call a doctor immediately, Hurshman said.

Hurshman said there is limited research on how cyanotoxins impact fish, but it has been proven cyanotoxins can accumulate in their bodies, particularly in their guts and livers. As such, fishermen are advised to rinse all fish from an HCB-infected water with clean water and to eat only the filet portion of the fish, Hurshman said.

Most cyanobacterial blooms begin in July before reaching their highest concentration in October and dying off through cold weather in December, Hurshman said. The DEQ’s HCB website — wyohcbs.org — provides a map of all known HCB sightings each season, along with satellite imagery of the state’s blooms.

The site also offers a place for community members to report any potential blooms they see while recreating, Hurshman said.