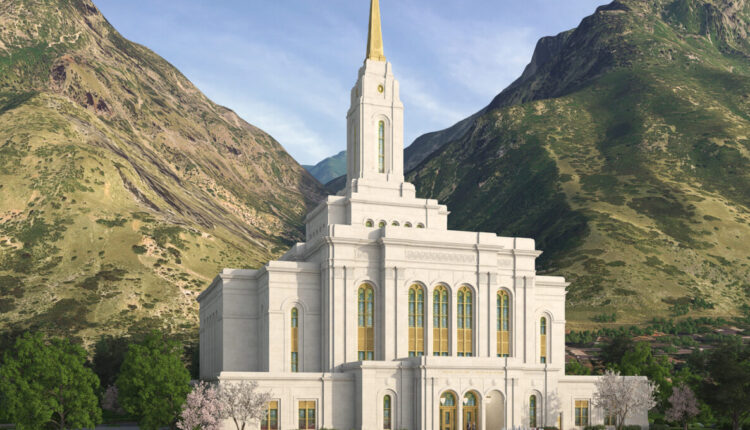 A representation of the new design of the Provo Utah Temple.

The Church of Jesus Christ of Latter-day Saints released a demonstration of the new design for the Provo Utah Temple on Wednesday.

At general conference in October 2021, President Russell M. Nelson announced that the Church would reconstruct the temple when the Orem Utah Temple, currently under construction, is completed.

The rendering shows the planned design of the redesigned exterior of the Provo Temple. The location of the temple remains the same. Closing dates will be announced at a later date, according to church information.

The new design is similar to the design of the Orem Utah Temple with arched windows and a gold top. As with most new temples, the Provo Tower will no longer have a statue of the angel Moroni, according to the representations.

“The Provo Temple has been a place of light and joy for so many. I will always keep the original in good memory, but I am looking forward to the conversion. The new temple will be bigger and more beautiful, ”said Provo Mayor Michelle Kaufusi. “I have met with representatives of the Church and I strive to help them in any way I can. As a city, we are grateful to the institutions and buildings that call Provo home. This new temple will become one of the most beautiful jewels of Provo, against one of the most impressive backdrops in the world, the peaks of the Rock Canyon. “

The LDS Church announced their intention to build a temple in Provo on August 14, 1967. The groundbreaking ceremony took place on September 15, 1969 to signal the start of construction. The temple was dedicated on February 9, 1972. by Church President Joseph Fielding Smith. The architect of the project was Emil B. Fetzer.

Since the October announcement, there has been speculation about whether the Provo Temple would look like the reconstructed Ogden Temple, as both were originally designed by the same architect and looked the same.

There are currently 27 temples in Utah under construction, renovation, or operating, according to the Church. Seven of these temples are in Utah County.

Temples are not regular Sunday services for members of The Church of Jesus Christ of Latter-day Saints. They are different from the thousands of regular chapels or meetinghouses around the world that the Church says are used for Sunday services.

Anyone, regardless of religion, can enter a Latter-day Saint meetinghouse and attend religious services. However, because temples are sacred as “the house of the Lord,” only members of the Church who are in good standing are allowed to enter the temples.

In order to enter a temple, a member must obey basic principles of faith and testify to their local leaders every two years.

The sanctity of the temple in antiquity can be seen in both the Old and New Testaments. In the Old Testament, Moses made the children of Israel carry the tabernacle, or a large portable temple, with them as they wandered in the wilderness. King Solomon built and consecrated the great temple, which dates back to 586 BC. Was destroyed by the Babylonians.

The great Western Wall can still be seen in Jerusalem today and remains a holy place for Jews even after millennia. The New Testament accounts for how Jesus Christ cleansed the temples when His holiness was violated by people using his courts as a common market, according to LDS Church themes.

Latter-day Saint temples are considered places of worship, a place of holiness and peace, separated from the cares of the world. They provide a place for Church members to make formal promises and commitments to God. It is also the place where the highest sacraments of faith take place – marriage of couples and the “sealing” of the family for eternity.

Temples are the only place where ceremonies such as baptism and eternal marriage can be performed for the benefit of the dead – a practice Latter-day Saints believe was followed in New Testament times but was later lost.

Temples teach Latter-day Saints about Jesus Christ and their later life with Him, their Heavenly Father, and their families if they are faithful to the teachings of Christ.

Worldwide, more than 200 temples are either operational, under construction, or announced.